This year's Live Tour Finals has one of the greatest rosters out of all Strongman competitions this year. 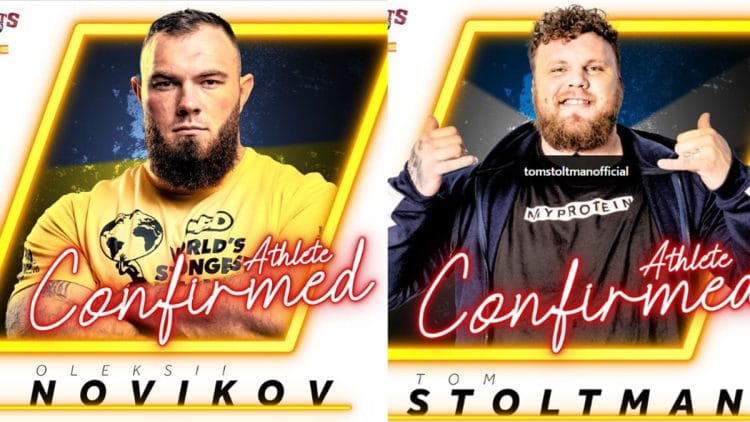 The 2022 Giants Live World Tour Finals are returning to Scotland once again, and will take place on October 8, at the OVO Hydro venue in Glasgow. It is one of the last Giants Live shows in 2022, and as such it gathers only the greatest Strongman athletes in the world. The official lineup for this contest has been long-awaited, but it has now been revealed.

The 2022 Giants Live World Tour Finals lineup will consist of thirteen competitors, who will all battle to claim one of the greatest Strongman titles in the world. Luke Stoltman will feel the most pressure, as he is coming back to defend his title from last year.

Lineup At A Glance

Tom Stoltman is definitely the most impactful name on the list, as he is just coming off a victory in the 2022 World’s Strongest Man. So Tom is now a consecutive 2x WSM winner, as well as the 2022 Britain’s Strongest Man. Another major win would be the cherry on top of Tom’s performances this year. His brother, Luke Stoltman, is also one of the favorites for the win, as he is consistently one of the greatest athletes in the world. Depending on the event, ‘The Highland Oak’ could dominate the competition.

The 2022 Europe’s Strongest Man, Oleksii Novikov, has stood on the podium in three of the greatest competitions this year. As the 2022 Giants Live World Tour Final is a one-day competition, Oleksii will definitely have a greater chance to win it due to his mental toughness.

Chieck “Iron Biby” Sanou is also participating, and Strongman fans are looking forward to his performance. Biby holds the Log Lift World Record and is widely recognized as a static beast. Graham Hicks will also compete at the World Tour Finals after a groin injury forced him out for a large part of the season.

Maxime Boudreault and Evan Singleton cannot be left out if talking about potential podium finishers. Maxime proved himself after claiming the bronze medal at the 2021 WSM. While Evan Singleton has done and won multiple Giants Live shows throughout his career.

Kevin Faires and Andy Black have also accepted their invitation for the 2022 Giants Live World Tour Finals after their recent performances at the 2022 WSM. Kevin recently set a new Dinnie Stone Replica Walk World Record at the 2022 Rogue Record Breakers. Andy Black, on the other hand, is currently coming up, as he just took part in his first ever World’s Strongest Man.

Trey Mitchell could be the athlete who surprises everyone at this competition. He proved that he is able to compete with the greatest in the world, as he won the 2021 Shaw Classic. So a podium finish could be realistic.

Pa O’Dwyer and Pavlo Kordiyaka are both climbing the ranks progressively, and have taken part in over ten national and international shows. They are now decently experienced athletes, so nothing is out of their reach. While Tyler Cotton comes into the 2022 Giants Live World Tour Finals as the most unfamiliar athlete. However, he has proved to be worthy through 2020 & 2021 America’s Strongest Man, having finished second in both editions.

Looking at the overall lineup, it seems like the Stoltman brothers and Oleksii Novikov are the main favorites to stand on the podium. However, there are a few well-known and a few newcomers who could put up a surprising performance.

Brendan Shaub on Liver King’s Natty or Not Status: “It’s Triggering Because They Can’t Live That Life”