Two-time Classic Physique Olympia Breon Ansley blasted his legs during a recent workout as he continues improving his physique for the upcoming 2022 Tampa Pro. 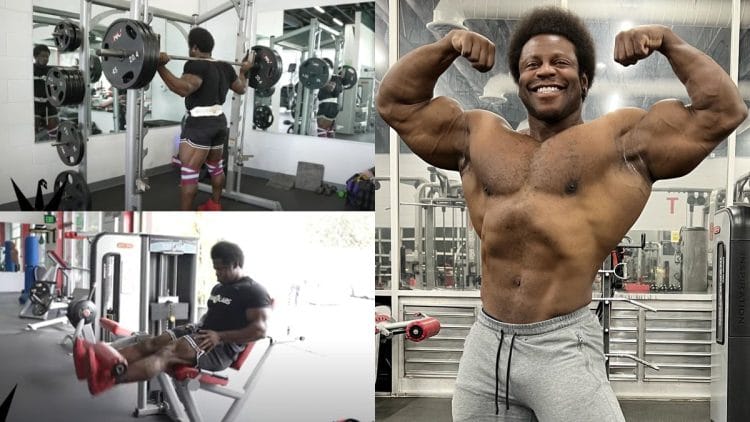 IFBB Pro Breon Ansley is known for his relentless work ethic and has remained a potent force in Classic Physique bodybuilding for quite some time. In a recent YouTube video, Breon demonstrates a brutal leg day workout session as he continues prep for the Tampa Pro slated for August.

Ansley has reached the top of the sport having won Mr. Olympia on two separate occasions. Breon captured his first Sandow trophy in 2017 after defeating the now three-time Classic Physique Olympia champion Chris Bumstead. Once again, Breon proved he was the best Classic Physique competitor in the world in 2018 and defeated “C-Bum” en route to his second Olympia title.

Maintaining a quality physique in Classic is difficult enough, and competitors eventually began nipping at Breon’s heels. In 2019, roles reversed and Breon was runner-up to Chris. Unable to rekindle his former glory, Ansley placed third at his next two Olympia appearances in 2020, and 2021 where Bumstead claimed victory.

Despite coming up short at some past Olympia shows, Breon stays in shape year-round and likes to remain active. To the surprise of many, Breon placed in fourth at the 2022 Arnold Classic. The 28-year-old Terrence Ruffin would claim the first place trophy. While Breon’s back looked incredibly conditioned at the Ohio show, it wasn’t enough to outshine Ramon Rocha Queiroz, who placed runner-up or rising Classic Physique star Urs Kalecinski, who came in third. While Ansley was unable to make it to the podium at the Arnold, Breon is determined to bring a renewed package to the stage at the Tampa Pro this Aug. for his last year in Classic.

“We are 16 weeks out from the Tampa. I was never really putting the show out there but you heard it here first, here now. You guys are definitely worthy of knowing the information first. My family. So that’s what it’s going to be guys. The Tampa Pro, 16-weeks out, I’m 197 lbs right now so I’m ahead of the game. I’m going to be at 180 at the weight cap in about another 10 weeks. So I want to be right at the weight cap 6 or 7 weeks out. It’s leg day today as a matter of fact. It’s big damn leg day. We’re not trying to put more size on the legs.

I think the legs are there as far as development and size. What we’re going to do is make the waist tighter and bring the waist down a lot more.” Breon Ansley shared.

According to Breon, he’s implementing the ‘master plan’ that he teased a few weeks ago. While he has expressed interest in a move into the 212 division, Breon has made it clear that he intends to compete one last year in Classic Physique.

“This new master plan that we’re putting together this time, that’s going to be the difference. So if I’m leaner over a longer period of time, you guys know usually I’m at 180 like the last two days before weigh ins or the last day before weigh in. So if I’m leaner for a longer period of time, the waist is going to be more streamlined and a lot tighter. Then if you make the weight at the last minute and fill up as much as I do to revive the body again, then it a lot of it is going to be wrapped up in the stomach.

Breon starts with leg extensions and lying hamstring curls supersetted for 3 sets each. He explains that for best results, don’t take too much rest time in between or none at all.

“I normally do about 3 sets. When it’s supersetted like that. I do 3 sets. I don’t quite do 4. Just 3 sets of supersets. Not too much rest in between. The superset, each one and no rest in between when you’re supersetting but when you’re on your second set and third set, very little. 30 seconds, 40 seconds, that’s all we need.” Breon said.

“Don’t let those little supersets fool you, they catch up with that ass okay. I can usually do rep up 4 here just by itself just a straight up set but with the superset that’s some, with the lower rest periods, that’s no punk, that’s no chump change man but you know we love it. Breon continues. We love to make it the most difficult we possibly can. When we make it that challenging that means our body looks that much better. Looks that much more powerful. The more challenging you make it the more wow factor you have.”

Ansley moves to the Sissy squat machine for a single set, 5 reps. He emphasizes squeezing hard to get the most out of this workout.

“Make sure you squeeze guys, at the top kind of while leaning back okay.  Lean back on the pad, squeeze at the top to get the full contraction and that full connection. Mind muscle connection all the way up here. If I’m squeezing here, and standing straight up or leaning forward, I feel the contraction down here in my lower quad right above my knee moreso. If I’m leaning on the pad and squeezing back here, I get that full contraction way at the top here by the hip flexor. We want the whole quad to be connected.”

Focused on improving his physique for his last season in Classic, Breon plans to bring a ‘wow factor’ at his next show that can’t be ignored by judges.

Fans won’t have to wait long to see how much Breon has improved since his last show at the 2022 Arnold Classic. Judging by his brutal high volume leg day training session, Ansley plans to exit Classic Physique going out with a big bang.