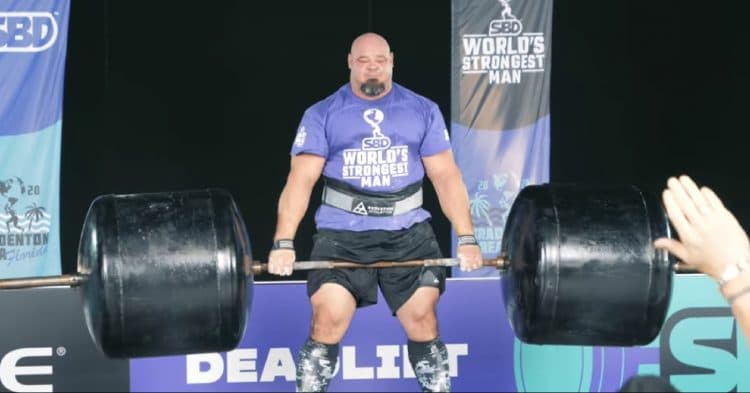 The 2020 World’s Strongest Man kicked off on Thursday, after a bit of a rocky start. Competition favorite Brian Shaw took fans backstage at the first day of the event, giving an intimate look at the process involved.

In the eyes of many, Shaw is the likeliest man to win this year’s WSM, especially given how many people have been unable to compete. He is the only former WSM winner to be competing this year, and he is arguably one of the best strongman of all time. Therefore fans were excited to see him compete, and see what kind of skills he can bring to the competition this year. Not only that, but they want to see if he can win his fifth title at the event, which would tie him for the most ever.

After a bit of a turbulent start, the 2020 World’s Strongest Man was finally able to kick off on Thursday, with the first of two days of qualifications. Brian Shaw decided to document his time competing on the first day, posting his experience onto his YouTube channel. Here the American strongman basically walked fans through his whole day, showing the prep and warm-ups for both events. To start though, he explains how strange this contest will be for him, after it was decided that the events would be moved indoors.

“I guess we’re inside a convention center or something like that,” Shaw said. “I’m kind of Interested to see what it will look like in there, and how they’re going to have it set up. This is another weird one because this is the first day I’ve ever competed at World’s Strongest Man with the contest being inside. It will be interesting to see how it shakes out, but I think myself and all the guys are ready to get this contest started, get that first event out of the way, and get rocking. So big day today.”

The video then cuts to Shaw at the convention center, where Eddie Hall and Robert Oberst poke fun at him over his weight, and the fan he is wearing around his neck. Then it is time for him to warm up for the first event, a 150kg Farmer’s Carry for distance. The way this event is set up is with a distance of 10m that athletes walk where they drop the weight, then pick it back up and walk 10m back, so Brian warms up this way, adding more weight as he goes. It then shows a brief start to the event, but due to broadcast restrictions he is unable to show the whole thing.

“I feel good about it,” Shaw said. “Just got to keep it rocking. This is a long contest, a marathon certainly, and you’ve just got to score good in each event. So I feel like a solid start.”

The second event of the first day is a 345kg deadlift for reps, which Brian Shaw jokes is going to be a long time away. After some more shenanigans with Eddie, it finally becomes time for him to warm up for this. He does a few reps with various weight, before it becomes time for him to go out and complete the real thing. Again you can see the first rep he completes, before the camera is forced to cut away.

At the end of the first day of events, Brian Shaw was second place in his qualifier group, one point behind Terry Hollands. This was a cool look at what goes into this unique version of the contest, and it will be interesting to see how he does the rest of the week.