The two Strongman legends might go head-to-head in a completely different sport! 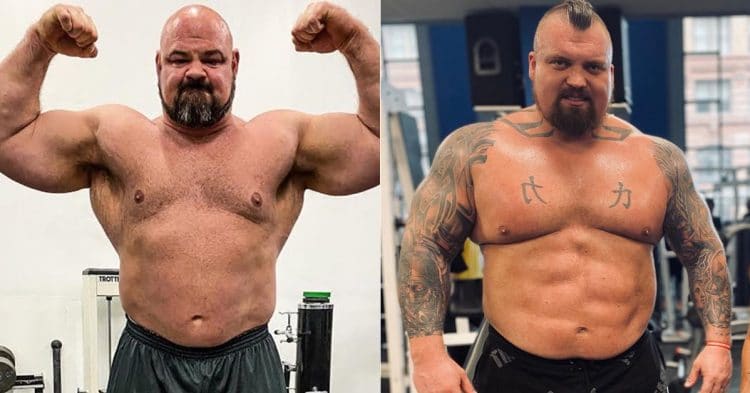 4x World’s Strongest Man champion Brian Shaw and 2017 World’s Strongest Man winner Eddie Hall have been more than acquainted with each other. They’re good friends who have competed against each other numerous times whether in competition or on the TV series ‘The Strongest Men in History‘. And neither hesitates to engage in playful banter with the other anytime they link up.

Both also have some pretty entertaining content on their YouTube channels which consist of challenges, training, and more. Well, word on the street is, these two legends may challenge each other.

So in a recent Q&A session, Shaw answered some interesting questions about his training, goals, and more. Then, one question read, “Would you consider shredding and getting into bodybuilding + Strongman like Larry Wheels?“

So Shaw explained that he probably wouldn’t unless he was done with Strongman so he could focus on one thing. He then brought up the fact that he and Eddie Hall are planning to compete against each other in bodybuilding at some point.

“I will say along these lines, Eddie Hall and I have had some conversations about doing a competition against one another in bodybuilding which I think that I would absolutely annihilate him in. But, it’s an interesting conversation. I wish we would have got that on video when we were going back and forth because it got a little bit competitive.”

“So, at some point when the timing is right, that might need to happen but it’s kind of got to be, to be determined on the date because it would have to work for both of us. But I’m sure that some people would get a kick out of that and I would have a good time beating him so we’ll see what happens.”

You can watch the video below where he answered the questions around the 5:55 mark…

One thing is for sure and that is, both of these behemoths have a lot of muscle mass on their frames. Eddie Hall made a transformation over the years, after his retirement from the sport, where he has leaned out a lot losing more than 70 pounds and looked jacked as a result. He weighed around 430 when was competing in big Strongman competitions.

This is a recent picture of Hall during the recent 2020 Arnold Classic a few weeks ago.

Now, Brian Shaw had a wake-up call after placing sixth at last year’s World’s Strongest Man due to his less than ideal cardio. So the plan was to drop down to 400 pounds from 434lbs to cut some weight after he felt it inhibited his performance since Strongman involves more than just being strong.

Well, he managed to drop a decent amount of weight and even detailed his journey along the way. But later on after a 7th place finish at the 2019 Arnold Europe, Shaw felt he needed to be big to maintain his strength while just improving his cardio and athletic performance.

Now, there is a height difference between the two with Brian Shaw standing at a towering 6’8″ while Eddie Hall is also pretty tall at 6’3″. This could make a difference, however, we’d expect that competition between these two would be judged on leanness/conditioning since neither is a bodybuilder.

It would be super exciting though and if it were to happen, it will most likely be after the 2020 World’s Strongest Man competition. Brian Shaw will need to maintain all of his weight and strength to really bring his best this year but we’ll keep you posted!