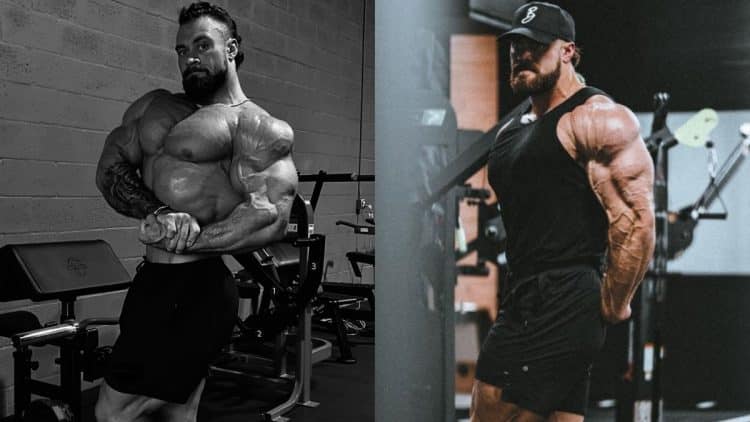 Canadian bodybuilder Chris Bumstead is the most dominant and popular Classic Physique athlete in the IFBB. In a recent post made on Instagram, Bumstead shared a physique update showing off his massive arms just a month out from the upcoming 2022 Mr. Olympia.

Reigning three-time Classic Physique winner Chris Bumstead enters the contest looking to defend his title. After defeating two-time Classic Physique Olympia champion Breon Ansley in 2019, Bumstead has managed to hold onto the throne. He has the chance to create history by taking home first place for the fourth year in a row.

Men’s Open division standout Iain Valliere had been the longtime coach of Bumstead. After finishing seventh in both in 2020 and 2021, Valliere was determined to improve his placing for this year. Bumstead revealed last month that he would be ending the ‘coach-client’ relationship with Valliere as Iain wants to stay focused on his career for the time being.

Considering how successful the two were while working together, there were doubts about how Bumstead would look on the Olympia stage without Valliere’s help. Shortly after the decision was made, he announced bodybuilding guru Hany Rambod as his new coach for the latter stages of prep.

About two weeks ago, bodybuilding Hall of Famer Chris Cormier gave his take on the dominance of Bumstead in the Classic Physique category. Cormier argued Bumstead was the biggest athlete in the division and backed him to improve his physique even more before Olympia.

In a recent Instagram post, Chris Bumstead shared a jacked physique update. He showed off gigantic arms a month out from the upcoming 2022 Olympia, scheduled for Dec. 15-18 at Planet Hollywood Resort & Casino in Las Vegas, Nevada.

Ahead of another title defense, Chris gave a look into his ‘champion mentality’ that helped him while in prep. He reflected on becoming a three-time Classic Physique champion and encouraged his followers to focus on the journey instead of the destination.

With over 11.3 million followers on Instagram, ‘CBum’ regularly provides updates for fans. He shared a grueling back workout last week and declared he was ‘ready to f**k up a fourth Olympia.’

However, there are a number of threats eager to knock him off his throne. Two-time Classic Physique Olympia winner Breon Ansley plans on going out of Classic with a bang and is bringing a heavier look. Meanwhile, Germany’s Urs Kalecinski also looks to be in tremendous shape ahead of the contest. Additionally, Ramon Rocha Querioz is carrying the weight of Brazil on his back, with a ‘big surprise’ in store for Bumstead in December.

Earlier this week, he shared the 3,000-calorie diet he was utilizing to shred out with only five weeks away from the event. As the competition gets closer, Chris will dial in his macronutrients and caloric intake to ensure he brings the best form on stage. Bumstead is leaving no stone unturned to secure another win at the Olympia.