After a tough few years, Von Moger is motivated to get in shape: 'not a lot of volume but high reps, fewer sets, with more exercises.' 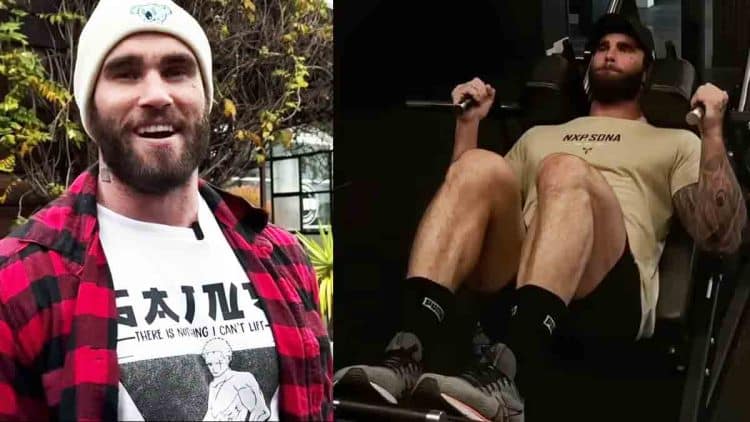 Despite a number of legal issues, Calum Von Moger appears motivated to turn his life around. In a recent YouTube video, Von Moger shared a high-volume leg day workout and set a goal to downsize his physique in the next few months.

Von Moger, who portrayed a young Arnold Schwarzenegger in the 2018 film, Bigger, quickly established himself as a star within the bodybuilding community. Given his shredded physique and training knowledge, many in the sport of bodybuilding had high expectations of Von Moger. However, the 32-year-old found himself in legal trouble a number of times over the last year.

In addition to a custody battle, Von Moger faced legal problems as a result of a road rage incident, where he stabbed the tires of an individual’s car. When police arrived at the scene, they discovered weapons in Calum’s vehicle including brass knuckles, a tomahawk, and a hunting knife.

In May 2022, the Australian bodybuilder jumped out of a two-story window and severely injured himself. Initially, hospital staff thought he wouldn’t be able to walk again. After being in a coma for six days, Von Moger eventually made a full recovery. He also faced a short rehab stint. Authorities were waiting for him as he still needed to attend court for the road rage incident last Jan. Fortunately, Calum was spared a criminal conviction but got slapped with a $2,500 fine.

On the road to recovery, Calum Von Moger returned to his YouTube channel for a demanding leg workout. While training, he made it clear his plan is to downsize.

Check out a full list of the exercises Calum Von Moger used below:

Von Moger explained that he was focused on higher reps, fewer sets, and more exercises.

“Leg day — just training quads, hamstrings, calves. It’s day two of this split I’m doing. So, and it’s like a high-intensity workout, so not a lot of volume but high reps, fewer sets, more exercises. Starting on the Smith Machine squats, I’m out of breath. Then, we’re going to do leg press for three sets. Then, I’m thinking of doing these barbell hack squats and then, maybe some stiff leg deadlifts, a leg curl… and see how much gas we have left in the tank after that.

Maybe some calves and leg extensions after. I want to keep it under an hour. If there’s some room for some calf stretching at the end, then we’ll get that in too. It’s a good one. It’s a nice solid leg workout. Leg press now, let’s stretch it a little bit, we’ll do this one now, the barbell hack squat,” Calum Von Moger shared.

“I heard that if you do too many reps, you won’t get as big, and I don’t want to get as big. I’m actually trying to downsize,” says Von Moger. “The hour of power is finished. We just finished a good, little juicy leg workout. It’s been a while since I did a shitty vlog. We got a little pump on.”

In an effort to clear the air, Von Moger issued a public apology and took responsibility for all of the mishaps last year. He said he felt hopeless after going down a dark path but implored anyone dealing with drug or alcohol problems to seek help. Calum shared that he now feels driven and focused.

RELATED: Calum Von Moger: ‘I’m Doing Better, Got All The Help I Needed and Ready to Return in 2023’

At the moment, it’s uncertain if Von Moger is considering a professional bodybuilding comeback. In the meantime, he plans to stay active and improve his physique.

Check out his video below: