Jacked talked about his new coaches and plan for the 2023 bodybuilding season: 'it's all business, nothing brotherly or intimate.' 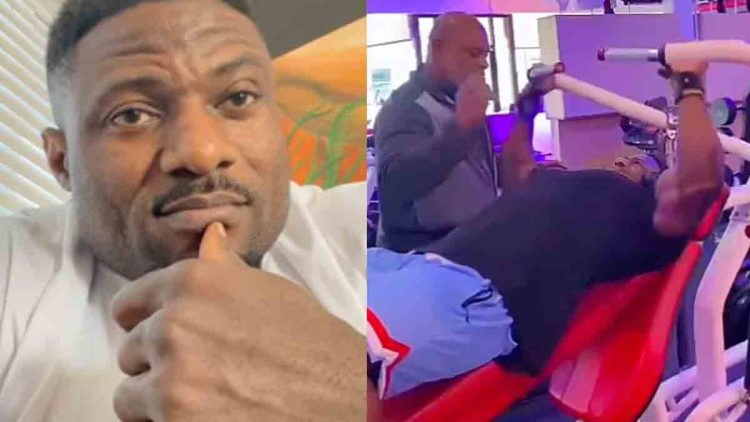 Bodybuilder Chinedu Andrew ‘Jacked’ Obiekea rose up the ranks in the IFBB Pro League last year. Speaking with Giles Thomas on a recent podcast, Andrew opened up about his new coaches and plans for the 2023 season.

Last year, Jacked earned his pro card by winning the Overall bodybuilding title at the 2022 Arnold Classic Amateur. Andrew finished first at the Texas Pro and claimed another victory at the Arnold Classic UK months later. While he had less experience than some of the other competitors, Jacked proved himself in Europe with aesthetics, shape, and a great posing routine.

In December 2022, Jacked took his talents to the Mr. Olympia contest, where he finished eighth in his debut. His former coach, George Farah, recapped Andrew’s showing. He revealed that Jacked was suffering from a 102-degree fever and mentioned that Andrew almost had to pull out of the competition.

A little over a week ago, Jacked announced changes to his coaching staff. He teamed up with the late Shawn Rhoden’s former trainer, Chris ‘Psycho’ Lewis, who will lead Jacked through his training sessions. And shortly after that, he revealed bodybuilding guru Chris Aceto would take over his diet and supplementation.

Andrew Jacked Looking Forward to 2023 Olympia, Says He Wins ‘Any Other Competition’

As for competition plans, Jacked intends to take time off after the Arnold Classic in March with plans of returning to the next Olympia contest.

“For me, I’m here for learning. I’m here for – it’s something I need and not what I want. Yeah, after the Arnold I will just go have fun and take some time off, German vacation, have good holidays and start the off-season again.”

Jacked on New Coaches: ‘It’s all Business, I Needed A Drill Sergeant‘

According to Andrew, the training atmosphere has been different since joining Chris Aceto and Chris ‘Psycho’ Lewis. He explained that he’s had to learn a lot of the basics ‘all over again.’

“We spoke a little, he [Chris ‘Psycho’ Lewis] said, ‘yeah, man let’s give it a shot,’ I came over. It’s been fun so far,” Jacked chuckled. “He’s been a good one because everything about his style of training is something I admire you know. I like the old-school time of working out because that’s how I train myself.

With Chris, it’s different. It feels like learning things all over again from the basics. I know it’s just a few days, but I know it’s long term especially in the off-season. I will definitely get some improvements,” says Jacked.

Andrew said things have been ‘smooth’ since joining his new coaching staff.

“I like working with people that go together. I think things will be very smooth. He said it’s cool, so I’ll walk with him [Chris Aceto] for the Arnold. Yeah, it started. Aceto — the real technician. He’s a wonderful guy,” says Jacked. “Well, both are Chris. I’m working with Chris and Chris. Both of them are amazing people to start with. Amazing. It’s all business and not brotherly or intimacy or whatever.

Even ‘Psycho’ I told him, ‘bro, I need a drill Sergeant, not a brother.’ And he’s like, he wanted the same too. We train and we go. There is no time for chit chat, smiling, whatever, no. We are in this for business and that’s exactly what I want. Aceto is doing his thing, and I’m like, ‘yeah, good, awesome,'” says Andrew Jacked.

Jacked isn’t the only bodybuilder confident in his chances ahead of the 2023 Arnold Classic. Recently, King Kamali (Shahriar Kamali) broke down why Jacked is Nick Walker’s ‘kryptonite.’ He argued that Andrew already has a ‘freak factor’ like Walker, but also has beautiful shape.

RELATED: Nick Walker Breaks Down 2022 Mr. Olympia Results: ‘I Could’ve Been Second… Andrew Jacked Made Us Look Like Amateurs’

Should he win the 2023 Arnold Classic, Andrew will leave Ohio with undeniable momentum before the next Olympia event. Jacked would also have enough time to make more improvements under the guidance of his new coaches.