Discover the training and diet that Calum Von Moger followed to play Arnold in 2018’s Bigger. 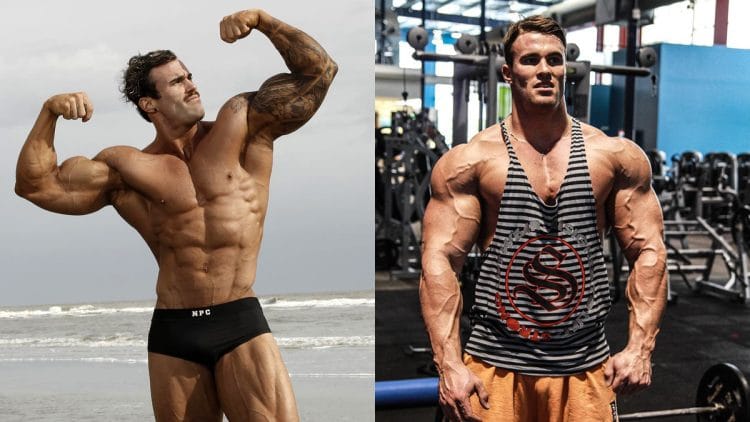 For a bodybuilder to be compared to Arnold Schwarzenegger in his prime is a huge show of respect. For him to actually portray the Austrian Oak when he was bagging his slew of Mr. Olympia titles is an acknowledgment that he’s something special. And Calum Von Moger is something special. His portrayal of Arnold in 2018’s Bigger got big props.

In this article, we reveal the training and diet that Calum followed to get in shape to play the greatest bodybuilder of all time.

Calum Von Moger was born on June 9th, 1990 in a small town in central Victoria, Australia. He was one of five siblings who grew up ‘wild and free’ on a small farm. When Calum was eight years of age, the family moved to the Victoria coast. As a boy, Calum played soccer. He maintained an active lifestyle and developed an athletic body. 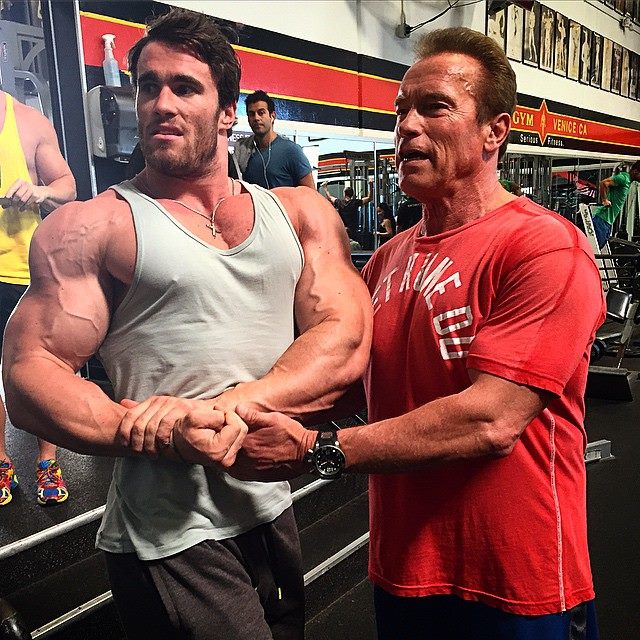 He was introduced to weight training at the age of 14 and began working out at an old warehouse, using rusted barbells and dumbbells. Calum’s initial training goal was to catch up to his older brother in terms of strength. To get bigger he followed a diet of tuna and whole chickens.

It was clear from the outset that Calum had superior genetics for bodybuilding. He made rapid improvements in muscle mass while retaining leanness to create a very chiseled, athletic yet muscular physique.

Calum’s mother didn’t think much of bodybuilding and tried to persuade him to give it up and focus on soccer.

When he was 23 years of age, he found himself working behind the counter at a GNC store. One day a friend of his came in and suggested that they make a promo video featuring Calum’s beach body physique.

The video became a viral hit and, virtually overnight, Calum became a fitness influencer online. He began competing as a bodybuilder in 2011, at the age of 21. His first contest was the NABBA Junior International Championships, which was held in Melbourne. He took first place in that show and then went on to claim the WFF World Junior, Mr. Universe, later that year. 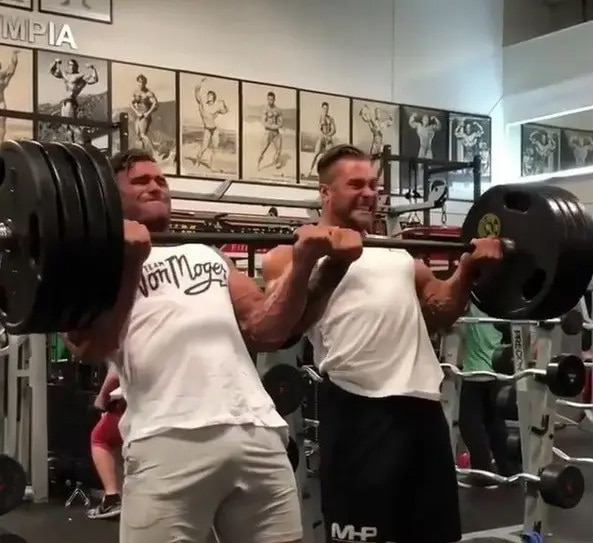 After taking 2012 off from competition to add size, Calum continued his winning ways in 2013 by winning the NBAA Class 1 International Championships. In 2014 he won the WFF Mr. Universe, returning the next year to claim the Pro version of that title.

Calum’s rise in the bodybuilding world has been interrupted by injury. The first came in 2017 when he was making a YouTube clip attempting to partner curl 405 pounds. The following year he again tore his bicep as well as rupturing his quadricep tendon and dislocating his knee cap when he tried to rappel down a cliff.

Unable to train, Calum had to watch as 50 pounds of quality muscle disappeared from his body. He has spent the past few years rebuilding his physique. The success of that effort is evidenced by the fact that he won the 2020 NPC Mr. Universe in Charleston, North Carolina.

Calum has a huge online following, with 3.3 million Instagram followers and nearly a million YouTube subscribers. In 2019, he became the first bodybuilder to sign a modeling contract with Gucci.

Von Moger has been quite candid about his use of steroids. In a YouTube video that has been viewed more than 1.6 million times, he states he began using anabolics after training naturally for six years.

Calum relocated from Australia to Los Angeles in 2014 with hopes of breaking into the movies. In 2021 he moved back to Australia and opened his own gym.

Calum has stated that his inspiration in bodybuilding was Steve Reeves, the original movie Hercules. He was drawn to Reeves’ athletic, relatable physique and hopes to inspire youngsters in a similar way with his body.

Calum is a guy with a fast metabolism. While that is great for staying lean, it makes it a challenge to pack on muscle mass. As a result, Calum generally follows a high calorie diet. However, he doesn’t bother counting calories in the off-season. He simply eats until he feels that he needs to stop eating. This instinctive style of eating has developed over many years so that he still has a pretty good idea of how many calories he is putting into his body.

Here is a sample of Calum’s off-season eating plan. Keep in mind that he is a big framed guy, standing at 6’2”, and that he is doing heavy weight training. If you are a guy with a slow metabolism, this type of eating plan will probably not be for you.

When it comes to getting lean, Calum gets a lot stricter on his diet. He will aim for 9 ounces of protein for each meal during this phase. Yet he doesn’t strictly count his macros. He’s been doing this for long enough to have a ballpark idea of what he’s putting into his body. Here is a typical cutting day of eating for Calum.

Calum has launched his own line of supplements named ‘Staunch’. He uses his own products every day. The basis of his supplementation program is a whey protein product, 100% Whey Isolate.

He takes a Staunch pre-workout product, Koala Freak. This is a high-stim pre-workout that contains 360 mg of caffeine, 6 grams of citrulline malate, and 3 grams of beta-alanine.
Related: Strongest Pre-Workout Supplements

When Calum was asked in an interview what his training philosophy was, he replied with the age old saying …

Rome wasn’t built in a day; it takes time, patience, and consistency.

The message that Calum was imparting was that you need to be consistent, progressive, and patient in your training. When asked what his cardio schedule was, he joked with his typical Aussie sense of humor, ‘What’s cardio?’

Calum does not do cardio throughout the year, apart from walking. To get as lean as possible he relies on his nutrition plan. However, when he is getting ripped for a contest he will do cardio 5 times per week. That will usually comprise time on the treadmill where he does interval walking on an incline. He always does his cardio in a fasted state knowing that it will force his body to draw from stored body fat rather than glucose for its energy needs.

Calum trains by instinct rather than following the rules that other people have set. He admires the old-school physiques where, rather than being mass monsters, top bodybuilders displayed fantastic lines, aesthetics, and detail. He especially admires Frank Zane, Serge Nubret, and Steve Reeves.

Calum puts a great deal of stock in rest and recovery to attain maximum muscle growth and leanness. He tries to take a short nap after every workout and schedules 2 to 3 rest days each week, depending on whether he is cutting or bulking.

Calum really struggled during his injury period as he had to spend long months unable to train as he watched his gains disappearing. He says that it was during that time that he reached his mental and emotional rock bottom. However, he remained unbroken and has managed to rebuild his world-class physique in a remarkably short period of time.

Calum believes in following a relatively high volume workload. Each of his major body parts consists of 15-20 sets, spread out over 5-6 exercises. He considers each of the deltoid heads to be a separate muscle, doing 22 sets in total between them. For arms, he does 24 sets between biceps and triceps.

Calum varies his rep range from a high of 20 down to a low of 6. The following sample workout features higher reps and is designed as part of a cutting cycle. When he switches to a bulking program, he will reduce the total sets per body part by around 25 percent and work with a 6-12 rep range.

Having suffered two debilitating injuries already, Calum is extra aware of the need to warm up. As a result, he makes sure to spend 5-10 minutes warming up before getting into his weight workouts. Warm ups involve dynamic stretching exercises where he moves the target muscle group through a full range of motion.

Calum trains twice per day. In the morning he will work a major body part, such as the chest, back, or quads. Then in the afternoon, he’ll come back and work a smaller muscle group like biceps, triceps, or deltoids. Each body part is trained twice per week, with a 3 day gap between each session.

When he is training for bulk, Calum allows himself 2-3 minutes rest between his heavy sets, this allows his muscles the time to recover their strength level. When he is following a cutting workout schedule, Calum shortens his rest between sets to just 30 seconds.

Here is a typical cutting workout for Calum.

Other Training and Diet Program:

Calum Von Moger is a fantastic example of a guy who created a fantastic physique, lost most of it through injury, and then had the mental and physical resilience to get it back. For that, he deserves all of our respect.

Whether you are coming back from injury or simply striving to create your best physique, you can draw inspiration from Calum’s philosophy, diet, and training program. Use his example to motivate your own journey.