Carlos Thomas Jr. Weighed 220lbs At The 2021 NPC Nationals, Not Ruling Out A Move Down To 212 Division

Carlos Thomas Jr. believes ‘a great off-season’ can prepare him for the open division 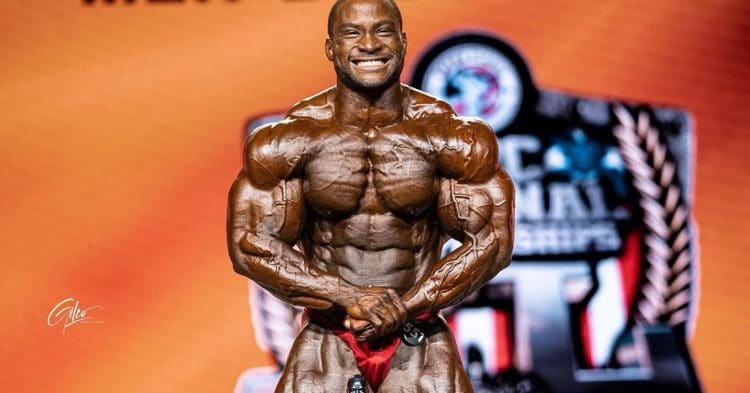 Scoring a win at the 2021 NPC National Championships, Carlos Thomas Jr. became the latest addition to the roster of IFBB pro bodybuilders. Thomas was a highly touted prospect entering into the competition and emerged victoriously in the super heavyweight division and overall en route to earning his pro card.

The impressive performance at the NPC Nationals has significantly raised expectations. In a recent interview with Giles Thomas of Muscular Development Magazine, Carlos Thomas Jr. spoke about his weight at the 2021 NPC National Championships and future goals.

Carlos Thomas Jr. competed in the super heavyweight division at the NPC Nationals. However, Thomas revealed that he weighed in for super division. On the other hand, his weight was in the 220lbs range when he took the stage. In addition to that, Carlos Thomas Jr. stated that although the plan was to compete in the super heavyweight division, the goal was to bring good conditioning.

“I really weighed right above the cusp of heavyweight. But after the whole process of drying out, I actually weighed 220 at the day of the show.”

“I could have been in any category. I weighed in for super heavyweight but at the day of the show, I was 220.”

“The plan was to (compete at super heavyweight) but to really bring in some good conditioning to the supers,” Carlos Thomas Jr. said.

Carlos Thomas Jr. competed as a middleweight (80kg/176lbs) in the 2017 NPC Nationals. Not only has Thomas taken a three-division jump but has also emerged as one of the hottest prospects in the professional bodybuilding circuit.

Carlos Thomas Jr.’s significantly shorter stature compared to other super-heavyweight competitors was easily noticeable at the Nationals. Many experts even wondered if 212 would be the ideal starting point for Thomas to begin his professional bodybuilding journey.

Carlos Thomas Jr. is not ruling out a move down to the 212 division just yet

Thomas, however, is not sure if he will take that route. He believes that his body has the look of an open division bodybuilder. Thomas added the decision to compete in the 212 division will be made on the basis of his body’s response to the off-season training. Above all else, Carlos Thomas Jr.’s ultimate career goal is to compete in the open division.

“Honestly, I feel like my physique has the look of an open pro. If I do it correctly this year with a great off-season, I don’t see myself quite making 212. But I’ll see. I’ll see if it shakes out that way, if I can get down there,” Carlos Thomas Jr. said.

“People don’t think Derek Lunsford would have made 212 but he did. You never know. If my body goes in that direction of 212, say the first two years or so, then so be it. But if it goes in direction of growing into being open pro, then that is the goal,” Carlos Thomas Jr. said.

Carlos Thomas Jr. has proved that the hype around his name was well-deserved. Just like legendary bodybuilders Shawn Ray, Kevin Levrone, Victor Martinez, and Lee Haney, Carlos Thomas Jr. made his way into the pro circuit with the win at the NPC National Championships. All of their careers are a testimony to the fact that Carlos Newton Jr. could very well be on his way to greatness if he continues to make improvements in the years to come.