Bumstead is going full throttle to keep up with the 'young guns.' 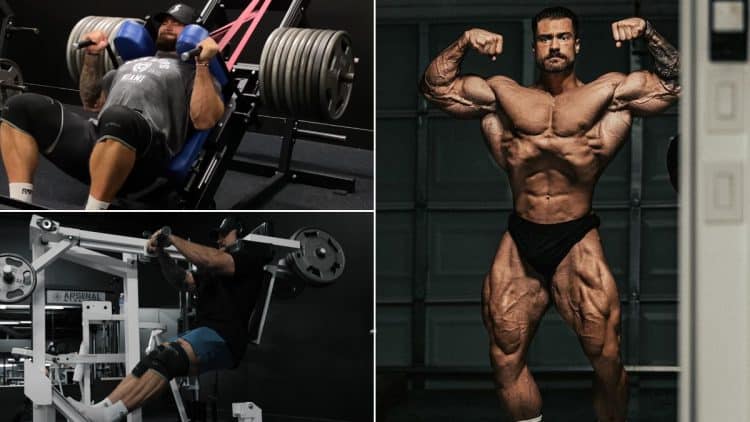 Chris Bumstead is a Canadian professional bodybuilder that competes in the IFBB Pro League Classic Physique division. He is one of the greatest bodybuilders of this generation and a three-time Classic Physique Olympia champion. After winning the title by dethroning the former champion Breon Ansley at the 2019 Olympia, “CBum” successfully defended the top spot at the 2020 and 2021 Olympia.

He will attempt to score a fourth consecutive win at the 2022 Olympia to make history. The event will take place from Dec. 15 to 18 in Las Vegas, NV. While he has hinted at retirement in the near future, the reigning Classic Physique Olympia champion is giving his best to retain his top spot this year and has started his competition prep for the 2022 Olympia 12 week out. A brutal leg day workout marked the beginning of his competition prep journey. So without further delay, let’s look at a detailed account of his training session.

Bumstead warmed up his lower body with hip adductions on the machine. He performed a few sets of this exercise and proceeded to perform the first isolation exercise of the day.

CBum first targeted the quadriceps with leg extensions on a plate-loaded machine. In addition to working the quads, leg extensions help in warming up the knees. The machine used for this workout had a high loading capacity, and the Classic Physique Olympia champ used six plates for the exercise. Bumstead cranked out three sets and took the last set to failure.

“It felt good. Knees are warmed, the quads are pumped. Now I am trying to move on to heavy compound movement…” Bumstead said after the sets.

The 27-year-old next took to this compound movement to work the lower body.

Pendulum squats work multiple lower body muscles simultaneously. While the quadriceps are the dominant muscle in pendulum squats, the movement also works the glutes and hamstrings. The deeper the person descends during the rep, the more work the glutes have to do. The hamstrings work with the glutes to extend your hips during this exercise. However, their involvement is lesser compared to the quads.

Bumstead performed the first set with four plates loaded on the machine and a 25-pound plate as a counterweight. He gave his feedback after the set and said:

“Pendulum squats are the sh*t. I love these things. Feels heavy as f***. I might not put on one more plate and see if that’ll kill me.”

Bumstead performed one more set on this machine and took to the power squat pro pendulum machine to pre-exhaust the quads. He did this exercise with the progressive overload principle and performed three sets with incrementally heavy loads. For the top set, Bumstead loaded 14 plates onto the machine.

This was the next compound movement in Bumstead’s leg workout. It is a triple extension exercise that includes a concurrent hip extension, knee extension, and ankle plantar flexion. Leg press works all lower body muscles including quads, hamstrings, glutes, and calves.

Bumstead used a different technique to do this exercise. After performing the first set of 10 to 12 reps, he took a short 30-second break while keeping his legs pressed against the foot platform of the machine and then performed the second set.

“I’ll keep my feet up there so that the gravity is pulling the blood down but your body is trying to rush the blood to the muscle that you are working. It f*** hurts, but you get a sick pump. It feels good. Pain is beautiful.” bumstead said.

He repeated this pattern two to three times. After that, CBum added a few regular sets and moved on to the next exercise.

After these compound movements, Bumstead took to the seated leg curl—an isolation movement that targets the hamstrings.

Bumstead slightly modified his foot placement during this exercise. He performed the first few reps by turning his feet outwards. After reaching failure with this, Bumstead switched back to the standard foot position and did the reps to failure. He repeated this process for every set.

“I’m pointing my toes and rotating a little bit out like putting pressure on the outside of the heel rather than straight down and I can feel it more in my lower outer half of my hamstring which is what would be showing if I’m hitting side chest pose…. I feel the mind-muscle connection shift right into that spot as I rotate my toes…”

Bumstead performed three sets of lying leg curls next and moved on to the next exercise.

The reigning Classic Physique Olympia champ trained his calves with these exercises and wrapped the training session.

The Classic Physique division is filled to the brim with elite competitors like former champion Breon Ansley, 2022 Arnold Classic winner Terrence Ruffin and up-and-coming talents like Ramon Rocha Queiroz and Urs Kalecinski. Bumstead is aware of the challenges that lay in the path of his fourth Classic Physique Olympia win. While speaking about this at the end of the video, Bumstead said:

“I want to keep muscle and stay thick to keep up. With some of the young guns coming up after me, I’ve got to keep killing myself every single workout.”

Bumstead is excited to have up-and-coming challengers around to motivate him to push boundaries. But one thing is certain, Bumstead will do everything in his capacity to retain the Classic Physique Olympia title when the Olympia returns to Las Vegas later this year.