The three-time Classic Physique Olympia winner also revealed he plans to do just one more Olympia contest after this year, 'depending' on his performance. 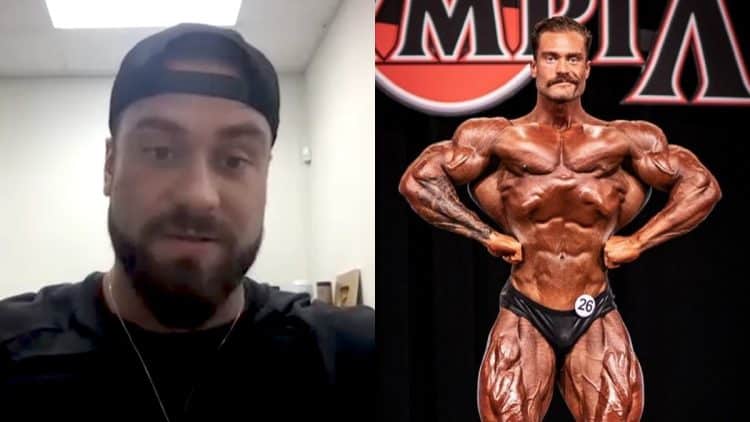 Reigning three-time Classic Physique Olympia Chris Bumstead is arguably the most popular active bodybuilder on the planet. In a recent video with Muscular Development, C-Bum described his toughest hurdles for this year’s Olympia contest and shared that he will not pursue the Men’s Open division next year.

“[Open] Bodybuilding is too difficult, too big, too freaky, and takes too much risk, whereas Classic floats in the middle and is more healthy for your body,” Chris Bumstead said while comparing the two divisions.

Chris Bumstead emerged as an Olympia champion in 2019 when he defeated his predecessor, two-time Classic Physique Olympia winner Breon Ansley. Since then, Bumstead has held the title firmly in his grasp. He defended it with dominant showings in 2020 and 2021.

In March, the Canadian native revealed that he was considering a move into Men’s Open bodybuilding. Speaking with Hany Rambod, Bumstead contemplated what it would take to move into the bigger division before retirement. After teasing the possibility, Bumstead wouldn’t rule out competing in the Open class, though said if he in fact made the switch, it would be a “one-off.”

In preparation for this year’s Olympia contest, Bumstead adhered to a strict bulking diet, which totaled 5,000 calories daily. These were necessary measures for Chris after he suffered weight loss as a result of a Covid infection in December.

Bumstead has also been transparent about the bodybuilding cycles he’s using to enhance his physique. Many in the community were shocked to learn that Chris is only using two compounds this year as opposed to the four or five he used at the start of his career. Despite the ‘decreased’ cycle, Bumstead is adamant he looks even better than before.

With the biggest show of the year coming in less than 14 weeks, the bodybuilding star opened up about a number of obstacles he will be facing this season, which include Classic Physique weight cap concerns, threats to his title, and what his plans are before he decides to retire.

Chris Bumstead says Arms and Back ‘Always the Focus’: ‘I Can Look Better If I Nail My Prep Properly’

C-Bum is confident he can bring an improved package to the stage in December as long as he nails his prep properly.

“The very end of the year [2021], my body wasn’t really responding how I wanted, so I had to push my body harder than I would have liked and peaked that week. I think my body shut down during the prep, and I didn’t look as good as I could have. However, I know I can look better this year if I nail it properly and do my things right,” says Chris Bumstead while discussing 2022 Olympia preparations,” says Chris Bumstead.

He added that his arms and back are his main concerns. This season, the reigning champion has made it a point to focus on his weak points. In addition, Chris plans to emphasize growth in his quads.

“Last year, I know back and arms were always the focus, but this past year I’ve put more emphasis on my legs and brought up my quads a little bit. I’m still bringing up my arms and back and perfecting the conditioning.”

Bumstead likes to ‘play it safe’ with his weight cap for Classic Physique (240 pounds).

When it comes to making weight in Classic, Chris would prefer to come in lighter than heavier as weight cutting during the week of the contest can be a grueling process.

“I don’t have a tremendous amount of weight to play with, but I didn’t try to make it hard either last year like some people do so. I’d rather come in smooth than too big and have to force myself down to make weight,” says Bumstead.

“Terence has proven himself, and he beats everyone who is taller than him. I don’t think his height is the only factor in his success, but he’s an awesome athlete and I think anyone can win. Classic is still growing, and the numbers at every level are booming.”

According to Bumstead, Classic Physique is more like an “art form” with posing and aesthetics whereas Open bodybuilding places more importance on muscle mass and overall size.

“[With Classic] It’s more like an art form [compared to the Open] with posing and the Aesthetics. There are a lot of amazing athletes coming up and doing a great job as ambassadors to the sport, including myself. We’re showing the new generation that it’s okay to do their own thing.”

Bumstead Plans to Compete at One More Olympia Contest Before Retiring

Despite his previous ambitions, Chris has decided to stay away from Men’s Open bodybuilding. In addition, he specified that his current plan is to compete at one more Olympia after this year’s contest.

“I’m good now, I think I’m going to do one more Olympia, and then depending on how this year goes, I might do another one. I’m grateful to get to compete, I don’t have to get more Olympias.”

His hardest obstacle is continuously staying on top of the sport, given how much “outside noise” he deals with as one of the most popular bodybuilders in the world.

“It’s more of a mental challenge to continuously stay on top and keep doing things, and when there’s a lot of outside noise coming in constantly, the eyes are on you, expectations are on you, and that can change things for sure.”

In addition to Terrence Ruffin, there are a number of elite-level Classic Physique threats eager to topple Bumstead. Two-time Classic Physique Olympia winner Breon Ansley and Germany’s Urs Kalecinski are both adding mass to combat the champion. Meanwhile, Brazilian standout Ramon Rocha Queiroz said last week that he has a special ‘surprise’ in store for Bumstead at this year’s Olympia.

Despite speculation about a “one-off” in the Men’s Open division, Bumstead is prioritizing his health and plans to finish out his career in Classic Physique. In spite of his success, Bumstead’s career could be coming to an end in the next two years.