The seven-time Mr. Olympia says he keeps an open mind when he's training at the gym: "I don't put a standard on how many reps it is for myself to get warmed up." 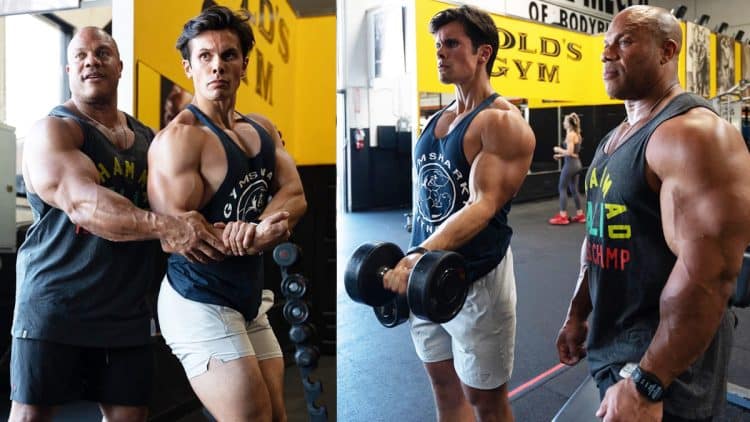 As a seven-time Mr. Olympia winner, Phil Heath has cemented his name among the best in bodybuilding. In a recent video shared on YouTube, Heath led influencer Will Tennyson through a demanding arm workout and offered some detailed posing instructions.

“I’m going to show you how you can get a pump in these arms,” Phil Heath tells Tennyson.

While he hasn’t competed since 2020, Phil Heath is still maintaining an incredible physique. Many speculated about his eventual return to the sport, however, those hopes were put on the back burner after Phil announced he will be commentating the upcoming 2022 Mr. Olympia contest.

Heath has been an open book since stepping away from the stage. In August, the decorated Pro spoke about the cycle he uses when he’s not competing. It remains unclear if he will ever return and seek an eighth Sandow trophy. When his coach, Hany Rambod, was asked if Phil was capable of reinstating himself as Mr. Olympia, he said nothing is impossible but expressed that it would be very difficult.

Will Tennyson is a fitness influencer who creates engaging content on YouTube. He’s amassed over 1.42 million subscribers on the platform. In one of his latest videos, he joined bodybuilding great Phil Heath for a tough arm workout and a detailed posing routine.

Before starting the arms training session, Tennyson measures Phil Heath’s biceps, which total 21 inches. He also measured his forearms at 15.5.

Note: Reps were unclear based on the footage provided in the video.

Phil Heath shared some thoughts before getting started.

“Biceps. Typically, the triceps is about one third of the arm right. So, we want to start off with that. The tempo isn’t going to be like — even after a one count, it jumps back out. We’re going to control the weight. We’re going to work the eccentric muscles.

The way I was able to win multiple Olympias and even before that become very successful [was because] I wanted to have more growth; I wanted to master each pin. Otherwise, what, you’re going to build really bad habits,” says Phil Heath.

For the first exercise, Heath offers some practical tips.

“Arms at about 90 degrees right. Let it come up here a little bit I don’t want to make sure that I’m leaning. I want to keep my back up tight. Lower back tight, and chest up and I make sure I can get that speed,” says Heath.

Will asks Phil why he likes to train certain exercises while raising one leg in the air.

“Yes. That’s just to add more levels of difficulty for me to keep my core tight,” Heath shared.

When asked if Heath uses rep ranges or failure, he had the following to say:

“It’s more important to just get your arm down. I don’t put a standard on how many reps it is for myself to get warmed up. I just want to know that I’m [ready]. I can put a number out like 15, 20 reps, a couple sets of those — but that’s when you need to focus on yourself. Looking at other people all the time, comparing yourself from others… will distract you from getting your own job done.”

Heath proceeded with alternating dumbbell curls and suggested not to “force the progression too quickly.”

“This is what’s fortifying my physique so when I go compete, I can destroy any man. How do I do that if I’m not doing this perfect. Chasing perfection. I know I’m not perfect.”

Moving on to dumbbell skull crushers, Heath reflected on what his opponents thought of him during his time competing.

“They knew when I was ready — it was an ass whooping competition.”

Phil suggests “pressing up instead of forward” with dumbbell skull crushers.

Heath and Tennyson practice concentration curls next. Phil recommended they stand up during this exercise.

“You’re going to feel it all in here [points to bicep]. When your [wrist isn’t there] it don’t. Move it right here, and it activates this [biceps] a little bit different. And if I have to get a little body English because it’s a little heavy — I can’t do that. Here’s the problem with that: if you start doing too much reps like that, you’re getting that instead of quality repetition.”

“If you’re cheating, you’re not mastering it,” says Heath.

Before ending the workout, Phil says to always try to “make your last set better than the first.”

Phil gives Tennyson some tips on posing before they wrap things up.

They proceed with some most muscular crab poses — one of Heath’s strongest during his time in the limelight.

Heath says that many active competitors are performing the front relaxed pose incorrectly. He says to puff the chest up, rotate the shoulder a little bit, and squeeze the right arm into the shoulder.

“See how your chest got all feathered at the top,” said Heath.

Heath explains the importance of back shots.

“I want them to see everything. Then when I’m static, they’re like, ‘oh my God.’ Back shots are so important. If you don’t have a back, forget it man, you’re going to get exposed.” “Don’t hold your breath when you’re doing these poses because you will pass out.”

After posing together, they decided to wrap the video up. It’s evident even when Phil isn’t competing, he still brings a lot of energy to his training sessions.

When it comes to training or posing, Phil Heath pays attention to the finer details. He doesn’t concern himself with the number of reps rather than the quality of each movement. By the end of the routine, Tennyson and Heath left with a massive arm pump.