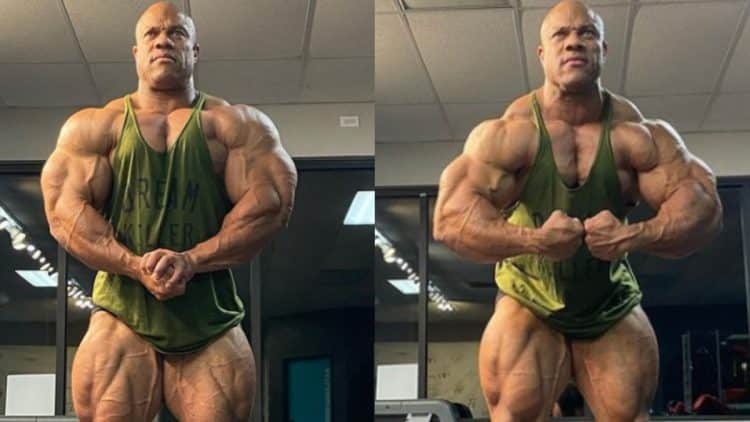 Bodybuilding legend Phil Heath has maintained an incredible physique despite stepping away from the sport in 2020. In a recent post made to Instagram, Heath revealed he’s ‘rebuilding’ his physique and promised that next year is about to be ‘fuc**ng crazy.’

The seven-time Mr. Olympia established himself as an all-time great throughout the mid-2000s in the Men’s Open division. In addition to retaining his title from 2011-2017, “The Gift” competed with the best in the world. At Olympia contests during his reign, Heath battled with archrival Kai Greene, as well as veterans Dennis Wolf, four-time Olympia winner Jay Cutler, and his successor the late Shawn Rhoden.

Phil has been open about his chances of coming back. Earlier this year, he shared that he only had a ‘5 percent’ chance of making a return. Even though many thought Heath would compete this year, he revealed that he won’t be taking on the Men’s Open lineup at 2022 Mr. Olympia. Instead, the legend will commentate at the prestigious event.

According to his former opponent Jay Cutler, he’s not convinced that Heath would make a competitive return. He shot the rumors down back in May and urged fans to stop asking questions about it. In spite of Cutler’s requests, Phil’s ability to maintain a top-tier physique has once again prompted discussions about a potential comeback in 2023.

In a story post reshared by Fitnessvolt, the former seven-time Mr. Olympia gave his thoughts on what’s to come next year.

“I’m in here doing my thing. That’s right, in here, getting better… feels really good being a lot more functional, thank goodness. But yeah, I had one early session today.”

“I just got done doing legs. Now I’m in here doing some sled work. Working on my sprinter form. Yeah man. Totally rebuilding my physique. 2023 is about to be fuc**ng crazy.” Phil Heath said.

In the post, Heath looks jacked and shared that he’s rebuilding his physique. Perhaps a return next year could be on the horizon, though he’s made no concrete statements about actually coming back to compete.

During his sabbatical, Heath has continued to train diligently and doesn’t mind discussing his gear/supplementation. He revealed an ‘optimal’ bodybuilding cycle he used recently and credits it for helping him stay in shape. In the past, his former coach, Hany Rambod chimed in on whether Heath could return competitively. Rambod said ‘it wouldn’t be impossible,’ but it would be a very difficult venture to take on.

In his spare time, Heath has discussed the frontrunners for 2022 Olympia. Many believe the reigning two-time champion, Mamdouh ‘Big Ramy’ Elssbiay is a massive favorite to win the show, However, Heath believes conditioning will decide this contest, and Hadi Choopan or Brandon Curry could take his title if Ramy’s package is comparable to what he brought in 2021.

Considering the overall conditioning and mass Heath has kept over the years, talks of his return will likely continue. With cryptic details about rebuilding his physique, it’s unclear what he’s preparing for, but Heath appears motivated for what’s to come in 2023.