Derek Lunsford on Bodybuilding Future: ‘I’m One Step Away In My First Mr. Olympia’

Lunsford intends to improve his chest/quads for 2023 Mr. Olympia and won't compete at the upcoming Arnold Classic in March. 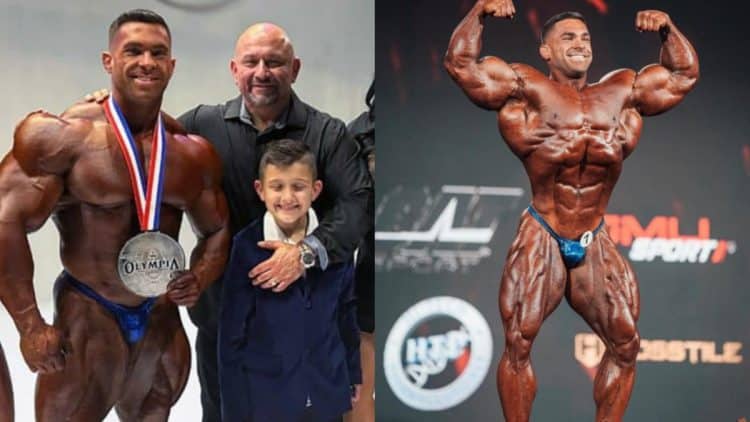 Bodybuilder Derek Lunsford is looking ahead after a historic runner-up finish in his Open class debut at 2022 Mr. Olympia. Speaking with Fouad Abiad, Lunsford recapped his performance and plans to improve his chest/quads for 2023 Olympia instead of competing at the upcoming Arnold Classic.

“I’m right back at the gym training, getting ready for next year,” said Lunsford. “I just knew this was a new beginning for me.”

Throughout last year’s bodybuilding season, Derek Lunsford dominated headlines. In May, the former 212 Olympia winner guest posed in place of Mamdouh ‘Big Ramy’ Elssbiay at the 2022 Pittsburgh Pro, where he left fans astonished by his size in the off-season.

After the appearance, Hany Rambod was concerned Lunsford wouldn’t be able to safely make weight for the 212 division. Weeks later, Olympia President Dan Solomon felt the same and mentioned Lunsford was ‘nowhere near’ the 212 weight cap. In Sept., Derek accepted a special invitation to compete in the Men’s Open division and capitalized on the opportunity.

Gasps were heard throughout Las Vegas’ Zappos Theater when Lunsford stepped on stage. His transformation from a 212 athlete to an Open standout was evident the moment he started posing. While he wasn’t able to claim the title, Lunsford came close in his Open debut, finishing second behind champion Hadi Choopan.

In a recent podcast, Lunsford recapped the performance and said he plans to sit out of the 2023 Arnold Classic to bring improvements to the Olympia stage next year.

Lunsford is optimistic about his bodybuilding future after nearly winning the Mr. Olympia crown on his first attempt.

“I’m happy for Hadi [Choopan] man. He’s been at this for so many years. People have argued that he should have had an Olympia title already. So, I’m happy for him man. And me coming in — with my first Open Olympia debut getting second, and it was really close. I think it was a one-point difference in pre-judging. It was just awesome man. I was just there to put on a show and have a good time,” says Derek Lunsford.

During the contest, Lunsford was confused after Big Ramy was sidelined throughout pre-judging. He added that something similar happened to seven-time Olympia Phil Heath back when he was actively competing.

Even when they did that with Phil [Heath], Phil was in the middle and then they were like, ‘alright, off to the side, you’re the winner, and that’s it.’ So, they never did that this time with anyone. It was kind of confusing, but I was like, I don’t think that’s the case here [that Ramy was ahead],” says Derek Lunsford.

Once Derek saw Ramy and Curry get their names called in fourth and fifth, his confidence grew.

“I just think, ‘wow.’ Fifth — I don’t think I’ve gotten lower than that, and he’s a former two-time champion. Like, [During the show] I think I just placed ahead of Ramy. Okay, wow. Then fourth place, Brandon [Curry]. Whoa, another Olympia champion, and again, I’m still placing higher than that.”

The former 212 Olympia winner said he plans to bring up his upper chest and quads moving forward.

“Dude you can’t complain coming into your Mr. Olympia debut getting second place and like, arguably pushing for that title. Dude, I was really on cloud nine and I still am to be honest. Then, I just talked to myself, ‘okay, well you’re this close. What do you need to get better?'”

“For me, how awesome is it to be this close to walking away with the title, and I know how many more improvements I can make. Like I said, that’s where my mindset is at. I’m one step away [from first place] in my first Olympia.”

Instead of competing at the 2023 Arnold Classic in March, Lunsford and Rambod agree the time would be better spent on making improvements.

“Where we place next year, I do not know. I do believe I could be the next guy in line. That’s what I’m hoping for, that’s what I’m working for. As far as any other shows between now and the Olympia, I told Hany that I would be willing to do the Arnold. I would like to do it, but at the same time, I don’t want it to take away from this next year’s Olympia. He’s in agreement with that.”

Optimistic about his future in the Men’s Open, Lunsford hasn’t stopped training and game planning for next year. As of late, the former 212 champ enjoyed three cheeseburgers as part of a cheat meal following his successful night in Las Vegas, Nevada.

Lunsford and Rambod are on the same page heading into the new year with hopes of improving his chest/quads. Instead of competing in Ohio at the Arnold Classic, they will take the next 10 months to bring an even better package to Orlando, Florida for 2023 Olympia.

How Many Push-Ups Should I Be Able to Do? The Ultimate Guide