The IFBB Pro League has accepted Lunsford's request for a special invitation to compete in the Open class at 2022 Mr. Olympia. 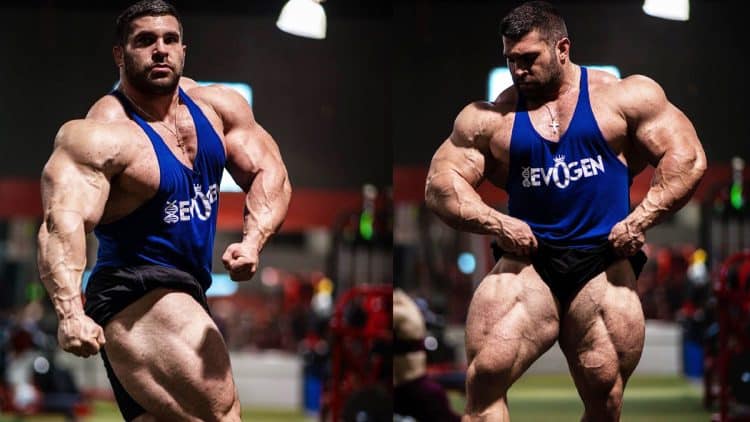 The Men’s Open division at this year’s Olympia contest just got an infusion of talent. After months of speculation, the IFBB Pro League has confirmed Thursday (September 15, 2022) Derek Lunsford’s special invitation to compete in the Open class at 2022 Mr. Olympia, scheduled for December 15th – 18th, in Las Vegas, Nevada.

Ever since guest posing at the 2022 Pittsburgh Pro, fans, as well as the bodybuilding community, have wondered if/when reigning 212 Olympia champion Derek Lunsford would receive a special invitation for the Open class at 2022 Mr. Olympia. He stood out among a crop of elite-level Men’s Open competitors like Hunter Labrada, Nick Walker, and former Olympia winner Brandon Curry without looking undersized.

In May, Derek’s coach, Hany Rambod suggested that the Open class was an option they were seriously having to consider because Lunsford was struggling to safely make the weight.

Rambod’s worries were echoed by Mr. Olympia President Dan Solomon a few months later. At the time, Solomon shared that the organization was ‘evaluating an invitation’ for Lunsford in the “big division” after learning that he was “nowhere near 212.”

Just about every year, special invitations are given out by Olympia brass. In 2020, reigning Men’s Open division champion Big Ramy received a special invite after he failed to qualify for the event based on points in part due to a positive Coronavirus test. In the past, the late Cedric McMillan and Kai Greene have also received special invitations to compete on the prestigious Olympia stage. And now we can add Derek Lunsford to that list.

On Thursday, September 15, 2022, Derek Lunsford and the IFBB Pro League announced that he will compete in the Men’s Open division at this year’s Olympia contest.

You can find Lunsford’s statement below:

“BIG ANNOUNCEMENT 📣
On this #ThrowbackThursday we take it back to 2021 Olympia Superstar seminar, the day after becoming 212 Mr. Olympia champion.

Our special invitation request to compete in Open Bodybuilding at the 2022 Mr. Olympia was accepted by the IFBB Pro League.

Thank you, all of you, who have supported me throughout my entire bodybuilding journey.

Working with @hanyrambod has transformed so much of my outlook on bodybuilding. From training to nutrition and mindset… I’m blessed to have a great coach and mentor in my corner.

I will continue to do my absolute best and bring a much improved version to the 2022 @mrolympiallc ⭕️” wrote Lunsford.

According to the IFBB Pro League, Lunsford submitted a request for the same special invitation that was being “held” for the seven-time 212 Olympia champion Flex Lewis. After “careful consideration,” the IFBB looks forward to seeing Lunsford in the Open division and added that this year’s Men’s Open division roster is one of the best lineups in the show’s 58-year history.

Here is the statement from the NPC/IFBB Pro League that has been posted to Instagram:

Earlier this year, Derek Lunsford @dereklunsford_ revealed a jaw dropping new version of his championship  physique when he made a surprise appearance in Pittsburgh.  The reigning “212 Lb” champ went toe to toe with some of the biggest and best in the world. The photos and videos had the global bodybuilding scene buzzing with excitement.  As Lunsford’s physique continued to drift further from his 212 lb proportions, his focus started to shift to the opportunity to challenge the likes of Big Ramy @big_ramy , Brandon Curry @brandon__curry and Hadi Choopan @hadi_choopan for the $400,000 winners check and the coveted Sandow Trophy.

Lunsford submitted a formal request to receive a special invitation to compete in the open division this December at the Mr. Olympia @mrolympiallc. He was seeking the same special invitation that was being held for former 212 king Flex Lewis @flex_lewis. After careful consideration, the Olympia promoters and the IFBB Professional League have granted Lunsford a Special Invitation.  The addition of Lunsford further bolsters what many are calling “one of the best lineups” in the history of the event.

Witness history the weekend of December 15-18 in Las Vegas as the bodybuilding and fitness world gathers for a weekend not to be missed.” the NPC/IFBB Pro League wrote.

Some athletes like Derek’s former 212 opponent, Kamal Elgargni, have said that all athletes should have to earn their qualifications instead of waiting on special invitations. Elgargni, who recently transformed his physique, attempted to earn his Men’s Open division qualification but fell short. He finished second at the 2022 Tampa Pro, and then earned fourth place at the Texas Pro, where he was outsized at both contests.

Throughout this year, Lunsford has trained alongside some of the sport’s hottest Men’s Open competitors, like Nick Walker, who finished fifth at last year’s Olympia event. During the off-season, Lunsford and “The Mutant” demolished leg day training together. Walker acknowledges that Lunsford could defeat him in the Open but doesn’t believe that will happen this year.

Bodybuilding legend and figurehead Jay Cutler believes Lunsford has the tools to make the top three at 2022 Olympia in the Open class. With less than 15 weeks until the biggest show of the year, fans can expect reigning 212 Olympia winner Derek Lunsford at his biggest when he competes in the Men’s Open division this winter.

Regan Grimes Out of 2022 Olympia, Tells Jay Cutler: ‘It’s Time to Take the Year Off and Continue Adding Muscle’