Dennis James tackled a number of topics including the 2022 Olympia outcome, Big Ramy's fifth place finish, and how the Olympia Qualification System can be revamped. 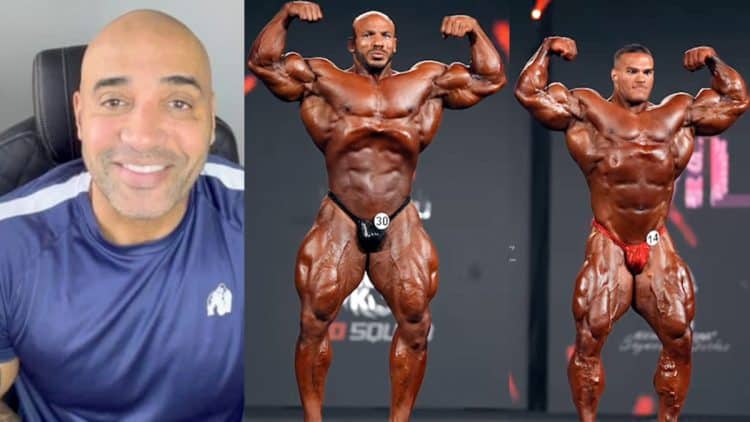 The 2022 Mr. Olympia contest shook up the Men’s Open division, prompting veterans of the sport to discuss the outcome at length. In a recent YouTube video, Dennis James, Milos Sarcev, and Chris Cormier talked about head judge Steve Weinberger’s decision to sideline Big Ramy, the Olympia qualification system, and a number of other topics.

During prejudging and finals at 2022 Olympia, it appeared to be a three-man race between Hadi Choopan, Derek Lunsford, and Nick Walker. The event’s conclusion left the bodybuilding community stunned as Mamdouh ‘Big Ramy Elssbiay was knocked down to fifth place despite being a massive favorite to win. Meanwhile, former 212 Olympia Derek Lunsford took silver and Walker left in third with the Olympia People’s Champ Award.

On December 17, 2022, Hadi Choopan was crowned champion after bringing an impressive combination of conditioning and balance. When the smoke cleared, the Men’s Open division landscape completely changed. Choopan’s victory sent a message to all competitors that shape, conditioning, and balance are now being prioritized over sheer size.

During the latest installment of The Menace Podcast, Dennis James, Milos Sarcev, and Chris Cormier shared their thoughts on the 2022 Olympia aftermath. They covered a wide range of topics including Samson Dauda’s performance, Breon Ansley moving to 212, the Olympia qualification system, and why head judge Steve Weinberger kept Ramy sidelined during most of the show.

“His [Samson Dauda] thicker skin would leave impression of less condition. This is that one thing. Even leading up to the show, look, we saw some guys. Nick Walker was sitting in the gym and you can see the super thin little skin and you could see through it. Samson — I knew he wasn’t going to have that but he has the beauty in everything.

Size, width, thickness, shape, nothing missing, a complete physique. I was announcing that he was going to be top four many times because I believe in Samson. It was just, would he get the chance for that first call-out, and if he gets the chance, how was he going to be next to Hadi [Choopan], who is polished and fibrotic everywhere,” Milos Sarcev said.

Dauda has confirmed he will be competing at the upcoming 2023 Arnold Classic. Given the improvements he’s made as of late, Milos Sarcev named him as a frontrunner to win the show.

“I wanted the world to see how big he actually is, how complete and how big. I think Samson put himself in contention to win the Arnold Classic and to be a top three Olympia next year with his presentation now. I’m sure he’s going to get some feedback from the judges on what he needs to improve.”

Milos said no one believed Samson Dauda earlier this year when he was completely off all steroids.

“Listen, when Samson was in Fouad’s place when he went there, he told him, he was just not off like cruising or anything, he was off-off. Completely off. Like when we talk about it, when we went off, that means OFF. He was completely off [gear] and nobody believed it.”

According to Dennis James, Ramy being moved to the center stage briefly in the finals did not mean he was in title contention. He specified that IFBB head judge Steve Weinberger likes to mix and match the last call-out.

“He started mixing up [the competitors on the stage], that’s what Steve [Weinberger] does. No. No. No Milos. Steve does that shit all the time in the last years, where he mix matches the last call-out. The last call-out he puts everybody in the middle. The only one who believed that meant something was Ramy I guess,” said Dennis James.

Sarcev shared that Hadi Choopan got better as the show progressed.

“Hadi, who is known for [being] super conditioned off the charts crazy striations everywhere — when he came [on stage] initially, we were, ‘okay, great, but it’s not Hadi conditioning.’ Then, as he kept posing, he kept getting better right,” says Sarcev.

“Andrew Jacked did good I thought,” says Chris Cormier. “He can look better but he was on prep the whole year. But I think he needs to take some time and just grow his body and just shut it down and come back. He did so many shows.”

The 2023 Arnold Classic is in less than 10 weeks and Dennis James said Clarida will compete as an Open athlete at the event.

James: Breon Ansley ‘Wasted a Couple Years in Classic Physique,’ He Will Be A ‘Bigger Shaun Clarida’ in 212 Bodybuilding

Before ending the conversation, Dennis James and Chris Cormier addressed Breon Ansley’s chances as a 212 bodybuilder. The former two-time Classic Physique Olympia made it clear he was moving to 212 months before performing at 2022 Olympia.

“I think Breon wasted a couple of years in the Classic Physique [category],” says Dennis James.

“I’ve been clamoring for him to do that [move to 212] for the last two years. He knows I’ve been doing nothing but talking about that for two years now,” Chris Cormier said.

Given his muscle maturity and detail, James believes Ansley will look like a bigger version of Shaun Clarida in 212.

“He has such great shape and presentation that he pulled shit off in [Classic Physique],” said Dennis James. “Imagine Breon [Ansley] at 205 or 208 with the condition and quality that he has. Who brings his condition and his muscle detail in the 212 right now. Breon would be a bigger version of [Shaun Clarida].”

Milos Sarcev: “Mr. Olympia Should Only Be 20 Competitors”

Recently, the Olympia Qualification System removed the point and tiering system that was used by athletes to qualify for Olympia during previous seasons. Sarcev believes not all pro shows should guarantee Mr. Olympia passage. He specified that Mr. Olympia should only feature around 20 competitors in total.

“We all agree, fourth, fifth, and sixth is an unbelievable achievement at Olympia right, those guys should be awarded. Not every show’s winners should be immediately qualified. Unfortunately, this is how it is. There are many shows that maybe should go into a different category. Logically, if you have 40 shows a year, there’s possibly 40 winners.

It’s not like Vince Taylor, Dexter Jackson, Chris Cormier back in the day [who] did every show. It could be a different winner every time. Not every winner should automatically be Olympia invited,” Sarcev said. “Instead of 400 competitors in all the classes, it should be 15 times each category. There should only be 20 Mr. Olympia competitors.”

James, Sarcev, and Cormier weren’t the only veterans to dissect the results of the 2022 Mr. Olympia contest. Retired veteran King Kamali (Shahriar Kamali) spoke out on the surprising outcome. Looking back, Kamali mentioned that Big Ramy looked flat on stage, which he attributed to taking too many diuretics.

RELATED: Judge Steve Weinberger on Big Ramy Losing His Title: ‘He Was Off, That Wasn’t The Real Ramy We Know’

With an entirely new Men’s Open hierarchy, many believe the Mr. Olympia title could change hands again next year. However, defeating a champion as consistent as Hadi Choopan will take a calculated effort.

Derek Lunsford on Bodybuilding Future: ‘I’m One Step Away In My First Mr. Olympia’