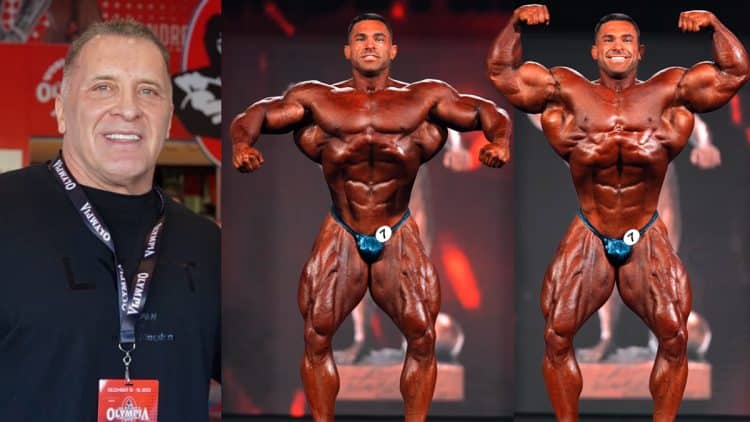 The 2022 Mr. Olympia took place Dec. 16-17 at the Planet Hollywood Resort & Casino in Las Vegas, Nevada. While multiple champions emerged, the biggest shock of the competition was Derek Lunsford‘s debut in the Open division. In a recent YouTube video, renowned bodybuilding coach Milos Sarcev shared his thoughts on Lunsford’s performance and backed him as a potential winner in the future.

There was a lot of anticipation going into the 2022 Mr. Olympia. Many believed it to be one of the most exciting and competitive seasons of any in recent history. As is tradition, the Men’s Open division served as the main attraction. Two-time Mr. Olympia winner Mamdouh ‘Big Ramy’ Elssbiay was looking to defend the title against proven veterans like Hadi Choopan, former victor Brandon Curry, and surging prospects Michal Krizo and Andrew Jacked.

Former 212 Olympia champion Derek Lunsford chose not to defend the title and accepted a special invite to compete in the Open category. After his win at the 2021 Olympia, there were concerns about Lunsford’s ability to make weight. Many believe he earned the invite after stealing the show as a guest poser at the 2022 Pittsburgh Pro.

Lunsford’s addition to the lineup was met with mixed reactions. Legendary bodybuilder Ronnie Coleman believed Lunsford would be the biggest threat to Ramy’s reign while IFBB Hall of Famer Chris Cormier stated the invite was well deserved.

On the other hand, Open standout Iain Valliere took issue with Lunsford’s entry and argued he should have had to earn it the traditional way by winning a show.

About two weeks out from the most prestigious fitness showcase, Milos Sarcev extended his support for Lunsford and predicted a top-five finish in his Open Olympia debut.

It became clear the contest was down to Lunsford and ‘The Persian Wolf’ Hadi Choopan during pre-judging. Lunsford shocked the world by getting a runner-up finish behind winner Choopan at the 2022 Mr. Olympia in a razor-thin battle that many believe could have swung either way.

“In a good way, Derek Lunsford was the biggest shock,” Sarcev said. “I didn’t really expect it. I did it however say that he can possibly win on the merits that he’s just the most structurally symmetrical, proportional, wow shape, and the biggest v-taper. I’m going to call that the most extreme v-taper in Olympia history. I was front row and when they went from side to the front, Derek was standing right in front of me. He looked monstrously huge. He pretty much looked the biggest over there.”

Sarcev praised Lunsford’s overall package and backed him to win an Olympia trophy in the future.

“You can’t say that Derek won the most muscular pose. This is not going to happen… But structurally, that wow factor, the beautiful physique. So I am delighted that IFBB is recognizing that a 212 guy, who’s smaller, shorter, with a beautiful shape now is a legitimate contender for the title.”

“The contest between Derek and Hadi was super close. It could have gone either way and I’m delighted for Derek. He delivered and cemented himself now as the [top contender] for the next Olympia. He’s going to be battling for the Olympia titles. I don’t care who brings it, Derek is a legitimate Olympia winner in years to come.”

Milos Sarcev recently teamed up with Brazilian sensation Marcello De Angelis to get him ready for his Open division debut.

Lunsford intends to stay in title contention for years to come and will likely battle it out with Hadi Choopan and others for the coveted Sandow trophy at the 2023 Mr. Olympia.