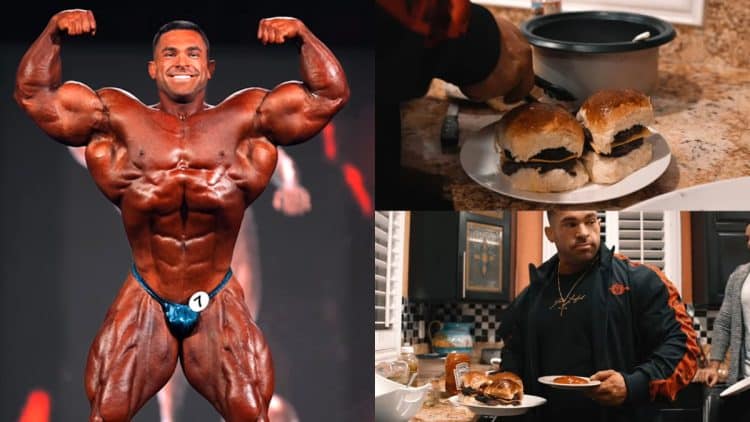 Former 212 Olympia champion Derek Lunsford proved to be the wild card at the 2022 Mr. Olympia, held Dec. 16-17 at the Planet Hollywood Resort & Casino in Las Vegas, Nevada. In a recent YouTube video, Lunsford shared a cheat meal he devoured after securing runner-up at the Olympia.

2021 212 Olympia winner Derek Lunsford is coming off a sensational performance at the most prestigious fitness showcase in the world. After taking home the top prize in the 212 category, Lunsford hinted at a move up to the Men’s Open division.

Lunsford turned heads with his guest-posing appearance at the 2022 Pittsburgh Pro earlier this year. He held his own next to some of the freakiest mass monsters of the Open class, including Brandon Curry, Nick Walker, and Hunter Labrada. In Sept., Lunsford accepted a special invite from the IFBB League to compete in the Open category at Olympia.

His entry into the Open class added even more excitement this season. Lunsford received major backing from bodybuilding legend Ronnie Coleman, who named him as one of Mamdouh ‘Big Ramy’ Elssbiay’s biggest threats. Former champion Samir Bannout predicted Lunsford would upset a lot of people at the show too.

When it was time to step on the stage, it became evident the battle was down to Derek Lunsford and the ever-consistent Hadi Choopan. Lunsford made a statement in his Open debut and placed second behind winner Choopan at the 2022 Mr. Olympia.

In a recent YouTube video, Derek Lunsford shared the cheat meal he ate to celebrate his runner-up finish at the 2022 Mr. Olympia.

Derek followed the same diet as usual after the show, with his first meal being egg whites and oats. The biggest difference in his diet from this year to last year was the addition of salt and that he stopped measuring his portions accurately.

Having narrowly missed the top prize in his first Open appearance, Lunsford will look to dethrone the defending champion Hadi Choopan at the 2023 Mr. Olympia. Bodybuilding coach Milos Sarcev already said he believes next year’s 2023 Olympia will be a fight between Choopan and Lunsford.

RELATED: Iain Valliere on Derek Lunsford’s Special Invite for Men’s Open at 2022 Olympia: ‘He Could Have Easily Done a Show and Qualified’

Following his runner-up finish, Lunsford issued a statement expressing gratitude for his team and reaffirmed that his goal is to come back to the Mr. Olympia in 2023 and win the Men’s Open title.

Stamina vs. Endurance — Differences, Importance, and How To Improve