Video: Fitness YouTuber Eric Kanevsky Asks Bodybuilders Their Stats, Then Measures Them to See Who Is Lying 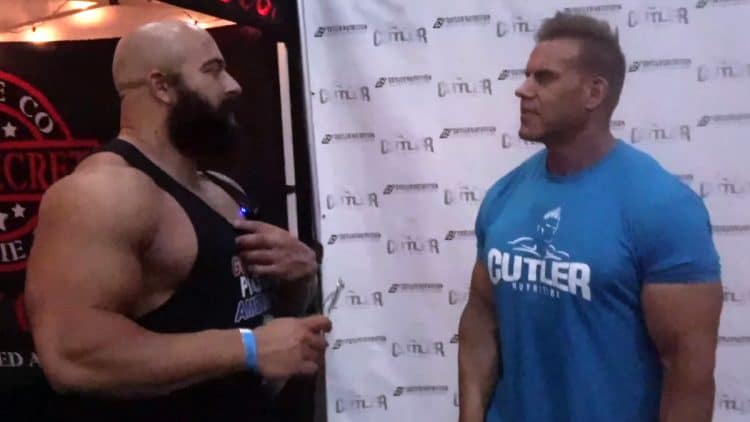 Eric Kanevsky is a Ukrainian fitness influencer with experience in bodybuilding but known for funny online content. In a recent video, Kanevsky tried to catch a number of bodybuilders lying about their weight and height by pulling out a tape measure and digital scale.

With nearly 130,000 YouTube subscribers, Eric Kanevsky created a successful entertainment platform following years of hard, but enjoyable work. He routinely shares hilarious videos, where he asks athletes and bodybuilders about their height and weight. In addition, Kanevsky’s notoriety continues to skyrocket due to his prank videos.

One of his more popular pieces of content — “The Russian Gangster – Don’t Look at My Wife Prank” is by far one of his funniest. He also imitates professors at colleges to clear students out of classrooms. Though, his latest effort involves testing the honesty of a number of high-profile bodybuilders. Even though approximating weight can be tricky given their size fluctuations, Eric Kanevsky is keen on exposing any athlete who tries to lie about their physical characteristics.

Four-time Mr. Olympia Jay Cutler, former 212 Olympia champion Derek Lunsford and rising Men’s Open talent Hunter Labrada were all under fire from Eric recently. You can find all of the conversations that took place regarding their weight and heights below.

Kanevsky’s first bodybuilding target is reigning 212 Olympia champion Derek Lunsford. When asked by Eric about his stats, Lunsford said his current weight is around 250-260-pounds.

“Hey look at you bro.” Lunsford laughs. “You look good man, you look good. My weight? We’re sitting anywhere between 250-260-pounds right now. Yeah, probably close to like 250. The thing is, people keep talking about switching divisions and stuff and there’s no weight cap in Men’s Physique, so we just put the board shorts on right?”

Lunsford jokes about some Men’s Physique competitors getting bigger before telling Eric his suspected height of 5″6′.

“Hey man some of these guys, these Men’s Physique guys they are huge. Like Andre man, did you see him arms? Lunsford said.

Kanevsky pulls out the digital scale to weigh Lunsford. The video shows Lunsford weighing 257.2-pounds. As it stands, Lunsford is qualified to compete at bodybuilding’s biggest show of the year in December at 2022 Olympia in the 212 division.

Lunsford said he and his manager Hany Rambod are discussing a potential move to the Open, but the bodybuilder added they haven’t decided what class they will compete in later this year. Surely, if Lunsford’s plans are for 212, he will be tasked with having to lose a lot of weight.

“Look, I’ve been 250 before. I will say… I’ve never looked like I do now at this weight, but I’ve come down from that weight to the 212 before having to shred a little bit of muscle off at that weight. I’ve proven I’ve been able to do it the last couple of years. If I have to do it again this year, we will. If we change courses, then we do. Hany and I started talking about what we actually want to do this year, but we haven’t decided.” Lunsford shared.

For his next test subject, Eric decided to check out Hunter Labrada, son of Hall of Famer, Lee Labrada.

“How much are you weighing right now?” Eric asked Hunter Labrada.

Hunter revealed that he’s currently pushing the scale at 280-pounds and added that he’s 5″9′.

“Closer to six foot and a half with shoes. We got the scale right here. It’s this way.” Eric invites Hunter to weigh.

Eric checks the scale to see if Hunter is lying, but the Men’s Open competitor was telling the truth about his height/weight. Labrada is in the middle of building his physique in preparation for 2022 Mr. Olympia. He managed to place fourth place at the prestigious show last year.

“Who else lied and got put on the spot?” Hunter asked.

“Julian Smith, but he didn’t lie. He just went Karen for no reason.” Eric replied.

“Most people don’t think you’re gonna bust out a tape measure and scale, so props to you.” Hunter said.

After exchanging pleasantries, Eric Kanevsky asked Jay Cutler how he’s managed to maintain his size in retirement. Cutler explained that he’s actually downsized since stepping away from the sport.

“I have to ask you, how did you get so big after retirement?” Eric asked.

After the small talk, Eric gets to the real reason he’s talking to Cutler.

“For real, I wanted to ask you what your weighing these days.” Eric told the bodybuilding legend. “And your height.”

The bodybuilding legend said he’s pushing around 230-pounds at 5″9′.

Eric decides to check Cutler’s height and weight by pulling out a tape measure and scale.

“With the shoes on, you’re 5″11′ so I definitely believe you.” Eric Kanevsky told Cutler.

The video shows Cutler weighing 237.8-pounds. Before calling it a day, Eric Kanevsky approaches fitness influencer Big Boy at the Fit Expo in Texas. He asked him for his height and weight but Big Boy wanted no part in the video.

Big Boy said Eric can get a picture or a poster but continued to warn Eric to ‘keep it respectful.’ He added that he’s seen Eric’s videos before, and said, ‘honestly, we’re not even trying to go there dog.’ Eventually, Eric attracts the attention of some of Big Boy’s crew, who tell him ‘kick rocks’ because he’s holding up the Expo line.

Ultimately, Eric Kanevsky was unable to catch any of the pros lying about their height/weight. However, it appears Eric Kanevky’s latest ‘prank’ got under the skin of at least a few of his recent test subjects.