Shaun Clarida performed a voluminous 3D delt workout as part of his preparation for the 2022 Olympia. 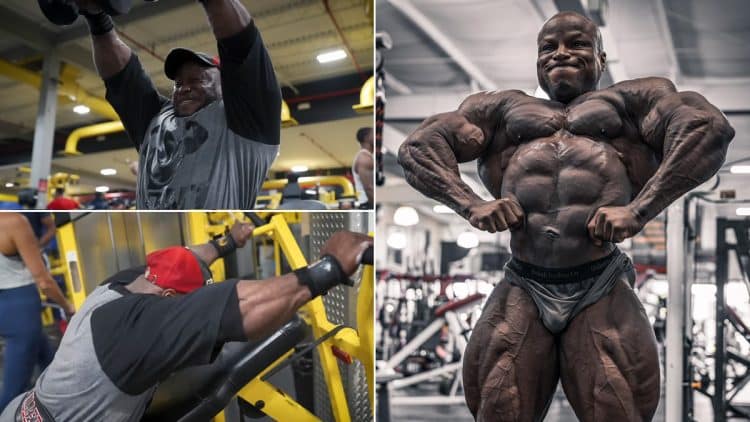 Former 212 Olympia champion Shaun Clarida knows what he wants and pursues it regardless of obstacles. It is therefore no wonder that his 2022 Olympia preparation is nothing short of beastly and insane.

“The Giant Killer” made his Olympia debut in 2015 after winning the IFBB Vancouver Pro in the 212 division. Later that year, he finished 12th in the Olympia competition. However, this did not seem to have demotivated him in the least.

Clarida’s efforts have taken a long time to bear fruit, but his victory at the 2020 Olympia has finally paid off. Although Shaun competed in the 212 bodybuilding class for most of his career, he has recently shifted his focus to the Men’s Open bodybuilding class.

The 2021 Legion Sports Fest Pro was Shaun’s first appearance in the Men’s Open. In winning first place, he demonstrated his ability to compete against elite competitors such as runner-up Regan Grimes and Sergio Oliva Jr. who placed third. In addition, he also qualified to compete in the open division at the 2022 Olympia. It’s noteworthy to add, that Clarida has a lifetime invitation to compete at Olympia in 212 division.

Previously, Shaun Clarida said he’d contact Jim Manion and Jake Wood to see if he can compete in both the Men’s Open and 212 divisions at 2022 Olympia.

The 2021 Olympia saw him finish second behind Derek Lunsford in the 212 division.

In a video posted on his YouTube channel on July 28, 2022, Shaun Clarida shares an extensive shoulder workout in which the emphasis was primarily placed on the rear and side delts.

“When we train chest, we train our front delts. We get in a lot of work. We don’t need to start with those. Start with your rear delts first, move to our side delts and then we’ll finish with our front delts.”

The bodybuilder finished off his last set by adding a few half reps towards the end.

Shaun moved to his second shoulder exercise on the delts and triceps routine.

“I’m going to jump on this shoulder press machine. It’s actually meant to kinda lay on your back and press overhead, similarly to the hammer strength press where you’re sitting down and pressing overhead. We’re turning over and we’re going to press forward and put a lot of stress on our front delts.”

As Shaun Clarida explained at the beginning, he moves from the back to the front. Therefore, after focusing on his rear delts, he turned his attention to the side delts.

“The Giant Killer” moved back to rear delts after working the side delts.

“Moving back to rear delts, we’re going to do a giant killer special. Partial rear delts, laterals. Really just swinging the weights, contracting the rear delts the whole time. Doesn’t need to come all the way up. We’re going to keep these at high reps. 30 reps each set. They don’t look like much but they’re absolutely killer.”

5) Around the world (side and rear delts together)

The former 212 Division champ finished the shoulder workout by focusing on both delts at the same time.

“Again, the movement doesn’t look like much but once you get into the rhythm, you hit those high reps, that burn is just nasty. Pure nastiness.”

“Around the worlds, those things really will tax your delts. If you ever never tried those, give them a shot. Again, doesn’t take a lot of weight. I think I did 15, 20-pound there. Kelts those reps really high.”

What’s next for Shaun Clarida?

His workout routine has reached new peaks, but he has no plans to slow down and Clarida is looking forward to bringing an insane physique to the Olympia later this year.

Video: Fitness YouTuber Eric Kanevsky Asks Bodybuilders Their Stats, Then Measures Them to See Who Is Lying