Bodybuilding coach Hany Rambod believes Derek Lunsford could be switching from 212 bodybuilding to the Men's Open class soon, 'it is becoming very difficult for him to make weight'. 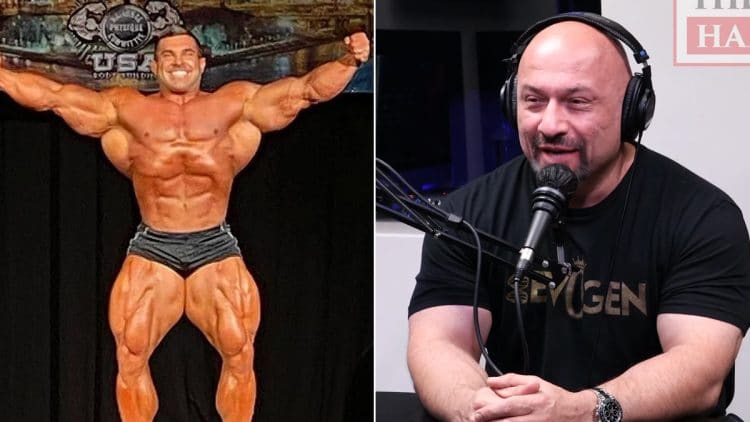 Mass monster Derek Lunsford has made a name for himself in bodybuilding’s 212 division with the help of coach Hany Rambod. In a recent interview, Rambod discussed Lunsford’s ‘inevitable’ move to the Men’s Open class after guest posing at the Pittsburgh Pro next to Nick Walker, Hunter Labrada, and Brandon Curry.

Derek Lunsford is known for his competitive nature, which has helped him reach incredible heights as an IFBB Pro. The last five years Lunsford has landed in the top-five at Mr. Olympia in the 212 division. However, his breakout season came last year after capturing his first 212 title at 2021 Mr. Olympia. The performance was especially impressive considering that he placed fourth at the same show a year prior.

Coach Hany Rambod is no stranger to the sport of bodybuilding either. He’s responsible for coaching some of the most decorated athletes to ever compete. During his time as a trainer, he helped sculpt the likes of seven-time Mr. Olympia Phil Heath as well as the ultra-consistent Hadi Choopan.

Since Mamdouh “Big Ramy” Elssbiay didn’t show up to guest pose at the 2022 Pittsburgh Pro, Lunsford stepped in on short-notice instead and stole the show with Nick Walker. As a result, the internet exploded with enthusiasm, wondering when Derek Lunsford will finally make his anticipated Men’s Open debut.

In a recent YouTube video, Hany explains what goes into the decision of moving Lunsford to Men’s Open bodybuilding. In addition, Rambod made it clear that Lunsford would still like to defend his 212 title at Mr. Olympia later this year.

“Derek was never supposed to guest pose. So, we had Derek there because we had an EvoGen booth because we were a sponsor of the show. I knew that there was a possibility that there might be something that we might need to do or jump on because of the fact that he is the current reigning 212 Mr. Olympia champion and that was something that we might do, but it wasn’t for certain.

When Ramy didn’t show up, then it was kind of more, ‘hey look, we can definitely use another body up there’.” Rambod said.

Rambod insists that Derek wasn’t preparing to pose at the Pittsburgh Pro and tried to keep his calories down despite continued growth.

“He didn’t get ready for this. This was something he did just training. Obviously, he’s growing right. He’s growing and we have had to keep his calories low, believe it or not. He was doing 150 grams of carbs and there was no carb-up for this at all.”

Hany expressed concern about Lunsford trying to make weight for 212 again. While many suspected that Lunsford was blowing up his physique for Men’s Open, Rambod denied that claim and said they have been keeping calories low in a steady manner.

“It’s going to be difficult, it’s super difficult. He was already flat last year. He’s put on a lot of good muscle and he’s keeping the calories and the food really low. Everyone is like, oh man he must be blowing up because he wants to do the Open, Hany has him doing the open.

Absolutely not. This is not something we were planning to do whatsoever. It was not something, like this was a prelude or a sneak-peek of him doing the Open, not at all. This was literally trying to be the best version of him, so he can be in striking distance of doing the 212 to hold on to his crown and that’s what this is about. Now it’s turning into other things, because everyone is like, is he doing it, he should do it, he looks great, he’s going to deflate… all of those things are now in play.” Rambod continued

“There’s two ways to look at it. Number one, he wants to go back and take his title back for one more time and then, he can turn around and decide to do the Open. The other way is he looks so good it’s going to be like how much deflation is going to go on between now and then and how is he going to look compared to last year when he was still not really pushing hard then. So, there’s a lot of different things going back and forth. We’re going to sit down and have to really dissect it and analyze all the different options.”

Rambod talked about the comparisons everyone made after Derek guest posed alongside Men’s Open standouts, Nick Walker, Brandon Curry and, Hunter Labrada at the Pittsburgh Pro.

“All in all, he did a great job. Obviously, then the other Olympia competitors came out and they started posing. They brought them all out and they started posing together. You can see the improvements that Nick Walker has made. You saw the improvements that Hunter Labrada made. Even Brandon, he’s no slouch, coming off the Arnold a couple months ago.

All of a sudden, you see them start posing next to each other and that’s when you can see it. Wait a minute, this guy that’s supposed to be a lot smaller than everyone else, looks just as big because again, bodybuilding is an illusion. He does weigh a lot. Even though he’s been trying to keep his weight down, he really has. He’s been doing cardio in the off-season and food intake, especially his carbs because once his carbs go up he really blows up.” Rambod said.

Lunsford is focused right now on keeping his weight in shooting distance for the 212 division just in case he decides to go for another title.

Hany Rambod on Derek Lunsford Moving Out of 212 Bodybuilding: ‘He’s going to be in Open, it’s just a matter of when’

After standing on stage against top-five Olympia caliber bodybuilders, Rambod believes Lunsford has what it takes to compete at a high level in Men’s Open. According to Hany, it’s less of an ‘if’ and more of a ‘when’ as many continue asking when Derek will make the transition.

“There’s a lot of things that we have to do to try to work around the fact that his body does want to get bigger. That’s why it’s inevitable that’s he’ going to be in Open, it’s just a matter of when and we have to sit down and figure that out and have those conversations now after he guest posed.

I looked over at Jay (Cutler) and asked ‘what do you think’ and he said ‘ridiculous’. He looks good right, and he said, ‘no, he looks amazing’. The judges were offering feedback, hitting me up, they’re like wow. All of a sudden my phone started blowing up because the pictures hit the internet.”

Admittedly, the decision to move classes is not an easy one to make, and Hany Rambod understands that sitting down and having a thorough discussion with Derek is more than warranted.

“So I think yeah, right now, it’s not clear cut. It’s still a tough decision as much as everyone wants me to sit there, and tell you he’s going one way or another. It’s definitely something we are sitting down and having to consider. There’s ramifications beyond him just competing that people don’t realize.”

Given the hype surrounding Lunsford after guest posing at the Pittsburgh Pro, many are excited to see him shake up the current landscape in Men’s Open bodybuilding. Judging by his size and muscularity, he would fit right in with some big names.

Rambod is uncertain as to when Derek Lunsford will make his switch to Men’s Open. Seeing that Lunsford is struggling to make weight for the 212 division, perhaps the career transition will be taking place this year after all.