Speaking with Dennis James, Günter Schlierkamp questioned Joe Weider's influence on Olympia: 'there were a few times where I could have placed better, and I didn't' 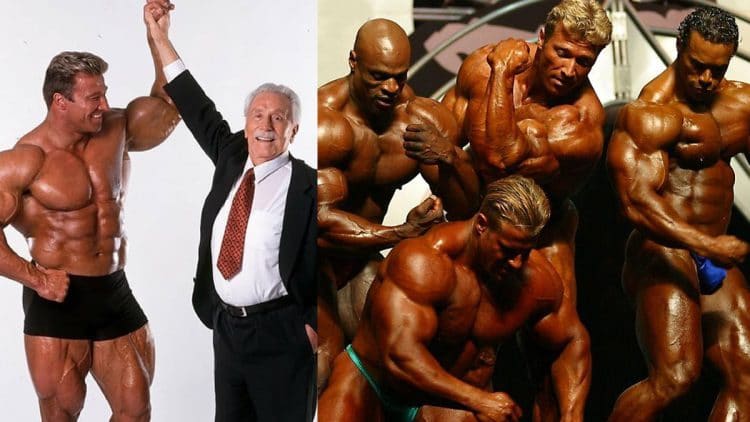 Retired Pro Günter Schlierkamp is one of Germany’s biggest draws in bodybuilding. In a recent interview with Dennis James on The Menace Podcast, Schlierkamp discussed Joe Weider’s influence on Olympia results and the dominance of bodybuilding legend Lee Haney.

Throughout his lengthy career, Schlierkamp built a pristine reputation in large part due to his incredible physique and professionalism. These qualities helped him earn the distinction of being the Greatest German Bodybuilder of All Time in 2003, a vote which was held by the “Sports Revue Magazine”. He battled against some of the world’s best though never managed to capture a coveted Sandow trophy despite participating in a number of Olympia contests.

Schlierkamp placed fourth at 2005 Mr. Olympia, prompting the Men’s Open Bodybuilding Pro to seek out help again from the Godfather of Bodybuilding, Charles Glass. After training alongside Glass, Schlierkamp was tasked with facing a deep lineup of talent at 2006 Olympia. He was unable to improve from the previous year and ultimately landed in tenth place despite being highly favored by Olympia creator Joe Weider.

The man behind Mr. Olympia’s inception in 1965, Joe Weider, no doubt played a significant role in helping the sport reach the masses. Recently, retired legend Kevin Levrone reminisced about a time speaking to Weider. Levrone asked the Olympia executive why he never won the prestigious event, and Weider allegedly responded by saying, ‘if I shuffle you all around, I’m still going to make the same amount of money.’

In the end, Levrone maintained that it was more beneficial for the organization to award Dorian Yates, who already had a stronghold on the European markets in the sport. After marinating on the issue, Dennis James and Schlierkamp believe that Levrone may have gotten things ‘mixed up’.

In a roundtable discussion, Dennis James and Günter Schlierkamp questioned Kevin Levrone’s statements about Joe Weider and whether or not he let politics influence Mr. Olympia.

“Because you just mentioned Joe Weider, and that brings me back to something we talked about last week. I was a little… I thought about this after we did the roundtable when Kevin [Levrone] mentioned about what Joe Weider said to him. Somehow, I still believe he got it mixed up.” Dennis James shared.

He was probably thinking about Wayne DeMillia, because Wayne DeMilia was the kind of guy who would say and do things like that. If that would be the case, if that would be the way Joe was thinking, don’t you think that Günter Schlierkamp would be Mr. Olympia? James asked. He was Joe Weider’s favorite boy. Can we all agree that Günter was Weider’s favorite boy?”

With Olympia ran by Jim Manion, Dennis James believes winners of the contest have nothing to do with the business nowadays.

“That’s what brings me to last week, I don’t agree because if you look at the way Olympia and everything is ran now, under Jim Manion, that shit will not cut it you know. I don’t believe this has anything to do with business who wins Olympia, at the end of the day.” Dennis James told the group.

Schlierkamp was one of Joe Weider’s favorite bodybuilders but told James that it never helped him place better at Olympia contests.

“Well I don’t think that Joe at the time that I came in, that I don’t think he had his hands in fixing anything because I ran into a lot of issues because Joe liked me so much. That’s why I think there were a few times where I could have placed better, and I didn’t.” Günter Schlierkamp explained to Dennis.

“Like other Mr. Olympia and stuff, like when everybody who in 2002 everybody was doing stuff but I didn’t even get compared to the top-three at all. Günter added. So, like I said, one way, yeah it benefitted me for getting a contract, getting a lot of work. But it didn’t benefit me from really competing, because I swear to god there was a lot of times where it literally hurt me more than it did me good.”

Weider appreciated how Schlierkamp was able to represent the sport of bodybuilding. They worked together on massive business ventures involving Walmart.

“Well, it obviously felt like really good security. In the other way though, I always… at the time, what I thought was a great niche too. Remember, I did a lot of things for Walmart, went to shareholder meetings and all that stuff. I met a lot the CEOs.

So, for one reason when I was involved and did some appearances there too. You know, Weider liked it. He said, ‘wow this guy is great, he comes everywhere and talks to some people in the stores’ and all this stuff.

So, the little job on the side, sometimes people didn’t pay attention to. That’s where I got a good reputation.” Günter Schlierkamp said.

Günter Praises Lee Haney for Being Natural Majority of Career

Schlierkamp is adamant that Lee Haney was natural ‘more than anyone else’ throughout his career. Haney, an eight-time Mr. Olympia, is tied with Ronnie Coleman for having won the most Sandow trophies at eight.

“I want to know literally is how little investment he did there. Because he looks to me, that he was always was with everything on the minimum. I think he probably trained more natural than anyone else I would guess.

I’m telling you, when I looked at him, when he was like what, 32 when he retired. I was like how is that even possible. He just retires. It felt like he could still go another ten years.” Günter told the group.

Given that Haney was only 32 years of age when he retired, Schlierkamp felt like the legend still had ‘another ten years’ in the sport.

It remains to be seen how much influence Joe Weider had on Mr. Olympia contest results. While Schlierkamp made numerous appearances on bodybuilding’s most prominent stage, he doesn’t believe his reputation or relationship with Weider helped him improve his placement at any shows.