“The Persian Wolf” looks set to pose a real threat to defending champion Mamdouh ‘Big Ramy’ Elssbiay and other contenders at the Olympia. 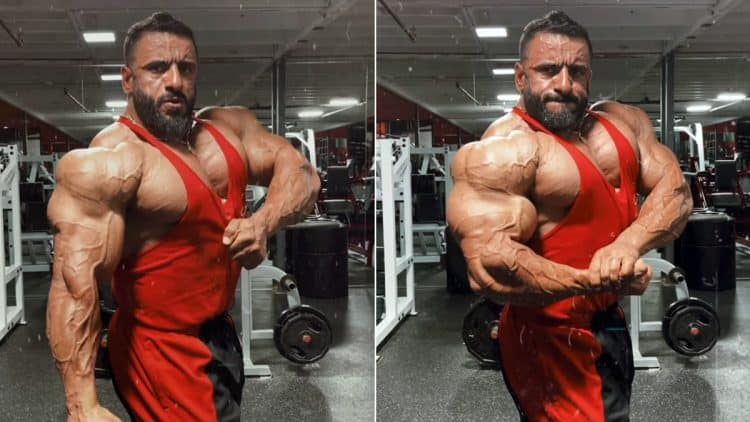 Men’s Open standout Hadi Choopan is gearing up for the upcoming Mr. Olympia 2022, scheduled for Dec. 15-18 at Planet Hollywood Resort & Casino in Las Vegas, Nevada. In a recent Instagram post, Choopan shared a massive physique update showing off his monstrous arms while posing just four weeks out from the show.

From defending two-time Mr. Olympia Mamdouh ‘Big Ramy’ Elssbiay to rising sensation Andrew Jacked, this bodybuilding season is turning out to be one of the most competitive and exciting for the Men’s Open division. Hadi Choopan has emerged as a real threat after missing out on the top prize at the 2021 Olympia.

Hadi is one of the most consistent bodybuilders in the Olympia, having never placed below fourth. He made his Open division debut at the 2019 Olympia and earned a third-place finish with his crazy conditioning and muscle striations. His next appearance at the 2020 Olympia saw him drop down to fourth place. The former 212 competitor showcased his impressive dedication the following year and finished third at the 2021 Olympia.

Choopan got accused of using Synthol on his shoulders in July from a physique update. Bodybuilding veteran Chris Cormier shared some pearls of wisdom for Choopan last month. He cautioned “The Persian Wolf” to bring a different look in his shoulders due to the recent Synthol allegations. While Cormier does not believe Hadi used the site enhancement oil, he pointed out the underdevelopment in his shoulders compared to his overall physique.

In a recent post made to his Instagram account, Hadi Choopan shared a jacked physique update just four weeks out from the 2022 Olympia. He can be seen doing a series of poses while showing off his gigantic arm muscle development.

Hadi added that the update was from a long time ago and that he has made significant progress since then.

“I took this video a long time ago, but now days have become more beautiful. Objects are closer to you than what you see here.”

In September, renowned bodybuilding coach Hany Rambod, also of Iranian descent, opened up about the challenges he faces in coaching Hadi Choopan due to the language barrier and travel restrictions. He revealed that Hadi arrived in the USA for the 2020 Olympia just a day and a half before the event. Despite the difficulties, Rambod is confident his pupil will bring an improved package with significant gains in muscle size and density this year.

Considering his past troubles with traveling internationally, there were rumors about Choopan’s visa status and whether he would be able to make it in time for the show. On Oct. 31, Choopan shared that he arrived in the country to train with coach Rambod for the 2022 Olympia. He gave a sneak peek into his preparations just seven weeks out from the show.

About two weeks ago, coach Rambod gave his analysis of the Men’s Open lineup for the upcoming edition. He predicted the size Choopan added on will push Big Ramy to not make any mistakes. Based on the recent updates, Hadi Choopan will likely bring his best version and look to get a top-two finish at the 2022 Olympia.