Bodybuilding veteran Chris Cormier has advice for Hadi Choopan: "don't even go near that shoulder with any substance whatsoever" 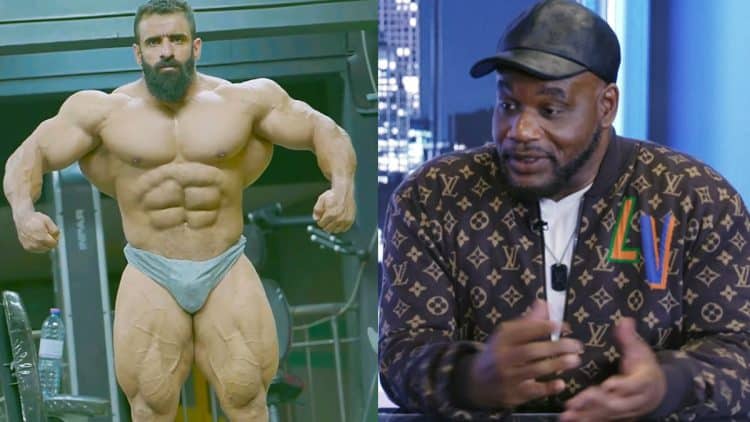 Bodybuilding veteran Chris Cormier is imparting wisdom to Hadi Choopan following rampant Synthol accusations due to his pointy shoulders. In a recent video, Cormier shared if Choopan fixes his suspect shoulders, he will be a ‘shoo-in’ for a better placing at the upcoming 2022 Olympia contest.

“He was one of the hardest people in the show [2021 Olympia]. A lot of people arguably thought he should have won the competition or been at least second,” Chris Cormier said.

Hadi Choopan is a front-runner for 2022 Mr. Olympia. It didn’t take long for the former 212 competitor to make waves in the Men’s Open division. In his career’s three Mr. Olympia appearances, he’s never finished below fourth place. He was arguably the most conditioned athlete when he stormed the Olympia stage last year, but was outsized by Brandon Curry in second, and reigning two-time Olympia winner Big Ramy.

Legends of the sport have acknowledged how dangerous Choopan can be. Seven-time Mr. Olympia kingpin Phil Heath believes Choopan has all of the necessary tools to win the prestigious title. He candidly stated that if Ramy leaves the door open as he did in 2021, Choopan will claim his first Sandow trophy later this year.

However, there’s one issue that may prevent the Iranian native from reaching his goal. He has been accused a number of times of injecting site enhancement oils like Synthol into his shoulders.

In July, former managers Mahdi and Hadi Parsafar accused Choopan of shooting Synthol into his shoulders. This came after a falling out took place when Choopan allegedly reported Mahdi’s YouTube channel for copyright violations. One of the latest to address these allegations is Chris Cormier — who believes Choopan needs to bring a different look if he’s to find success at 2022 Mr. Olympia.

“I didn’t think that it was that bad of something to make that big of an issue. You can look around at a lot of competitors and see something similar like that in my opinion,” says Chris Cormier.

That could probably be an imbalance. I would tell him, ‘hey listen, this could make your arms look a little bit smaller. This could overpower your chest.’ But I don’t see a typical inflammation of Synthol on him,” says Terrick El Guindy.

Cormier maintains that scar tissue is affecting the appearance of Hadi’s shoulders. He warned the Men’s Open Olympia contender not to show up with his shoulders looking inflamed like he did last year.

If Choopan stays away from pinning his shoulders, then Chris believes he will inevitably move up in placings at Olympia.

“I just think that if came with a different look in his shoulders, softened up even a little bit in the shoulder area, don’t even go near that shoulder with any substance whatsoever. Then, I think that’s one of the shoo-ins for him to move up in placings.”

In addition to Choopan, fans have suggested that reigning two-time Mr. Olympia Big Ramy also uses Synthol in the delt/shoulder region. However, after fans continued to accuse Ramy, he issued a recent physique update to dispel the rumors.

This wasn’t the first time that Cormier discussed Synthol and the role of site enhancement oils in bodybuilding. Last month, he told up-and-coming athletes to steer clear of using Synthol after it caused lifelong damage to his calves. While he understands why others would want to take shortcuts in making muscles appear fuller, Cormier says the damage only gets worse as bodybuilders age.

It should be noted that there is no concrete evidence that either Ramy or Choopan used site enhancement oils. Although, if Hadi Choopan wants to improve from last year’s Olympia, his shoulders need to look different, according to Chris Cormier.