"The Persian Wolf" has landed in the U.S. less than seven weeks until 2022 Mr. Olympia and gave fans a sneak peek of the look he's bringing. 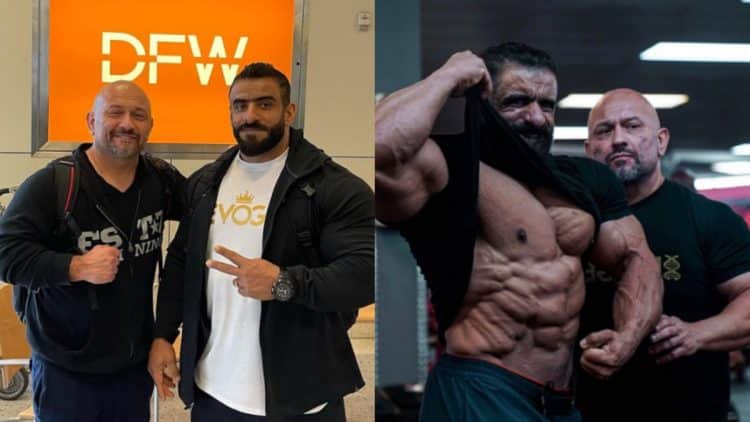 Rumors about Hadi Choopan‘s Visa issues have been brushed to the side after the bodybuilder landed in the United States this week to prepare for 2022 Mr. Olympia. In a pair of posts published to Instagram, Choopan and his coach Hany Rambod shared a shredded physique update less than seven weeks until the marquee event.

Choopan, an established Men’s Open competitor, is respected for his ability to enter show after show in peeled condition. In the three Mr. Olympia appearances of his career, the Iranian native has never finished below fourth place. Last year, he brought one of his best packages to date and pushed champion Mamdouh “Big Ramy” Elssbiay and contender Brandon Curry at 2021 Olympia, where he secured third place, respectively.

With time running out until 2022 Mr. Olympia, Choopan’s coach Rambod discussed his chances at the upcoming contest this December. He believes Choopan’s added size will spice up the show as fans always expect his conditioning to be top tier.
In 2020, Rambod shared that Choopan arrived for the show a day and a half before taking to the stage. Despite the challenges of last-minute preparations, Choopan still entered the event with stellar conditioning. Last year, he fortunately made it to America with six weeks. This time, Choopan will have the next seven weeks to acclimate his body before taking his talents to Olympia for a fourth time.

On Sunday, October 31, 2022, Hadi Choopan landed in Dallas, Texas in the company of his coach Hany Rambod.

“Look who made it to Dallas… ✈️@hadi_choopan
Thank you @evogennick for all your hard work on making this happen!” Hany Rambod wrote.

Fans and bodybuilders expressed their excitement about Choopan’s arrival. Among them were two of Rambod’s pupils — reigning 212 Olympia winner Derek Lunsford, who recently accepted a 2022 special invitation for the Men’s Open division, and Andrei Deiu‘.

In a post made to Instagram, Hadi Choopan showed off his build after landing in the U.S.

This isn’t Choopan’s first update since embarking on his 2022 Olympia campaign. During the off-season, Choopan gave his followers some progress photos. And while his training has been intense, there are some in the sport who believe his pointy/inflamed shoulders may hold him back from placing higher at Olympia, most notably, bodybuilding veteran Chris Cormier.

Cormier advised Choopan recently to bring a different look to his shoulders later this year. In the past, Choopan has been accused of injecting site enhancement oils like Synthol into his shoulders. Moreover, Cormier warned Choopan not to inject ‘anything’ whatsoever around that area as it might affect the overall balance of his physique.

No one is counting Hadi out this year given the overall package he brought in 2021. In fact, seven-time Mr. Olympia Phil Heath has mentioned that if Big Ramy leaves the door open as he did in 2021, Choopan could catch him slipping. Meanwhile, one of Choopan’s rivals, Nick Walker has also named “The Persian Wolf’ as a legitimate threat when dissecting the Men’s Open lineup for 2022 Olympia.

RELATED: Hadi Choopan Was ‘The Best Conditioned Athlete’ At 2021 Olympia, Says Lee Haney And Others

Given his history of success at the event, fans are excited to see Choopan back on stage. Choopan has the next seven weeks to dial in his body to secure his first-ever Sandow trophy.