Coach Hany Rambod predicts the reigning Mr. Olympia will be challenged by the added size and conditioning of Hadi Choopan's new and improved physique. 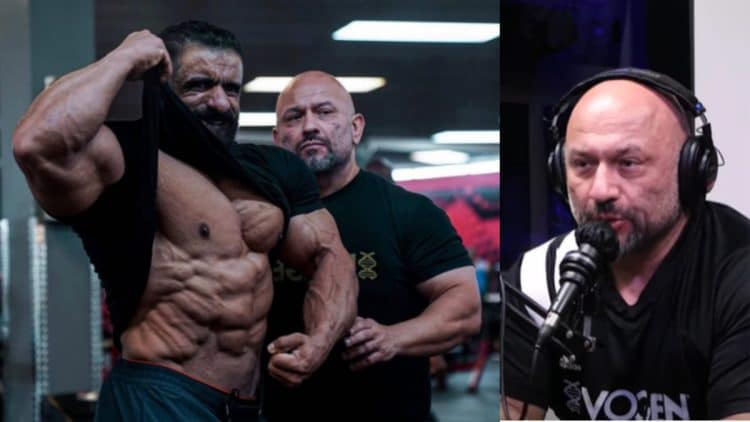 Hany Rambod has a busy schedule heading into 2022 Olympia as he will be responsible for coaching a number of athletes to success. In a recent video, Rambod reflected on Hadi Choopan‘s ambitions for this year and briefly discussed the Men’s Open lineup expected to compete this winter.

Rambod is a decorated coach in the sport of bodybuilding. He’s overseen and helped shape some of the most influential icons of this generation, like four-time Olympia winner Jay Cutler and Phil “The Gift” Heath, who secured seven Sandows during his epic reign.

For this year’s Olympia contest, Rambod has his hands full once again. He will be coaching the ever-consistent Hadi Choopan, who has never placed below fourth place in any of his Mr. Olympia appearances. The Iranian native made headlines earlier this week after arriving in the U.S. to finalize his preparations for yet another Olympia contest.

However, that won’t be the only athlete Rambod is helping shape for the biggest contest of the year. In addition to Choopan, Hany will coach Andrei Deiu, 212 reigning Olympia champ Derek Lunsford — and most recently, three-time Classic Physique Olympia Chris Bumstead.

Worries about Lunsford’s size in the 212 division were sidelined in September after the bodybuilder accepted a special invitation to compete in the Open class at 2022 Olympia. While Lunsford hasn’t mentioned 100 percent which category he will compete in, most believe the Open class to be on the horizon. In his latest venture, Rambod discussed the Men’s Open lineup and specifically what goals Hadi Choopan has in mind for the current season.

In a recent video published on YouTube, Rambod discussed Choopan’s U.S. arrival and what their plan of attack is for 2022 Olympia.

“Hadi Choopan, ‘The Persian Wolf’ — we know that he could have used more size because his conditioning is always on point. With a little bit of that added size I feel that we’re going to try to balance out — keeping as much as that conditioning as possible while adding in size to be able to be even more impressive,” Hany Rambod said.

“First of all, it’s food. He is a person who just needs to stay on top of his food. Because these guys, you know he competed down in like the 170-pound category before. I mean, not as light as Dexter Jackson, but Dexter Jackson I believe competed as a bantamweight or a lightweight.”

According to Rambod, Choopan has grown “tremendously,” and his x-frame combined with fuller quads will create a wow factor on stage.

“He has grown tremendously. I feel like with him now, it’s really about just staying on top of his food, continuing to work on his training techniques so he can engage his back more, get those lats wider because it’s going to help accentuate more of the x-frame as he grows and continuously trying to build fuller quads, so the lower part of the x-frame is going to really stand out as well,” Rambod explained.

One of the primary concerns for Rambod and Choopan is making sure he keeps his shape while still adding size.

“You don’t want to go so big that you start to kind of screw up your shape. There’s a balancing act to it. You also don’t want to be small next to a guy like Big Ramy because he’s got the size. You have him with the size, Brandon Curry with the aesthetics, and you have Hadi with the conditioning.”

Despite new talent emerging in the league like Andrew Jacked and Michal Krizo, Rambod warned the Open class that Lunsford is a viable threat.

“Now, holy crap, this is the most stacked Olympia lineup in a long time,” Rambod shared. “You can’t forget Derek [Lunsford]. He was kind of like in a situation where people were asking to see him in the Open class. And because there like, ‘hey this Open class is kind of weak or it’s not as strong as it used to be,’ you hear all kinds of shi* on the internet right.

The bottom line was when you looked at the competitors six months ago and you look at them now. You got Krizo, you got [Andrew] Jacked. Derek now. There’s Romania coming up, there’s also an x-factor there. Normally you have 15 to maybe 25 competitors in the Open class, sometimes 20 at the Olympia. I think there’s over 30 right now.”

Rambod isn’t the only figurehead in the sport who believes Lunsford could shake up the 2022 Olympia contest. Eight-time Olympia Ronnie Coleman believes either Lunsford or Nick Walker could surprise a lot of people later this year. However, when discussing the lineup in detail, Coleman was confident Ramy will retain his title in six weeks without much resistance.

RELATED: Hany Rambod on Phil Heath Winning Another Olympia Title: ‘I Never Say Anything is Impossible, but that Would Be Very Difficult

Given Rambod’s wealth of experience training elite-level talent, it will be exciting to see how his pupils do at 2022 Olympia, especially top names like Lunsford and Choopan. Despite the size of the reigning champion, Rambod feels Choopan has grown ‘tremendously’ and will push Ramy this December.

Iain Valliere: Big Ramy ‘Should Be Penalized’ For ‘Hole’ in Right Quad at 2022 Olympia If It’s Not ‘Mitigated’ In Time