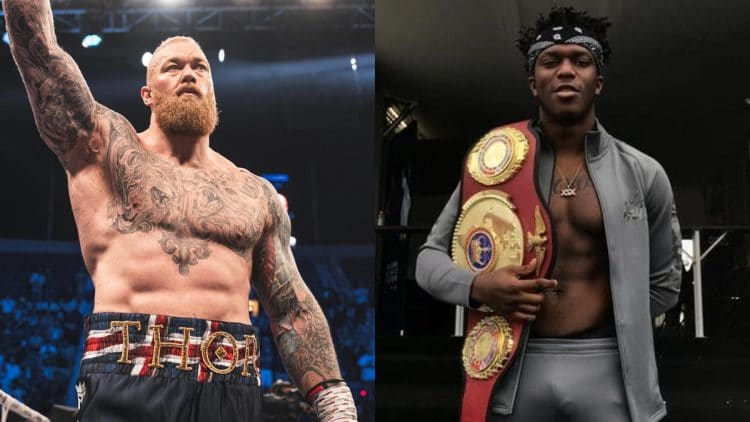 YouTube star KSI recently left the door open for a potential boxing match against Game of Thrones star Hafthor Björnsson. Despite being called out by KSI, Björnsson questions the validity of a potential showdown.

On March 19, Björnsson settled the score with Eddie Hall. After a heated six-round battle of boxing, Hafthor was awarded the unanimous decision win. Going back to 2017, the rivalry ignited after Eddie outpointed Hafthor at the World’s Strongest Man. Following the loss, Hafthor suggested that he was cheated out of his 2017 WSM first place victory. Pressure behind the feud continued to build after Björnsson bested Eddie’s previous deadlift world record by two pounds when he pulled 501kg in 2020.

Despite his recent success in the ring, British rapper KSI is confident he has the skillset to beat Hafthor. KSI began his career in boxing with an exhibition bout earning a victory against fellow British YouTuber Joe Weller. KSI’s name exploded after fighting social media influencer Logan Paul in 2018.

The fight resulted in a majority draw and the pair of athletes ran it back a year later. Unlike their first amateur fight with headgear, their second encounter was his first professional bout. KSI narrowly defeated Logan Paul by split decision in Nov. of 2019.

Eying a fight with Thor in 2022, KSI believes that his speed would give the former Strongman star problems in the ring.

“It’s one of those things because he’s slow, while he’s recharging to strike you can hit him. KSI said.

After catching wind of KSI’s call-out for a boxing match, Hafthor Björnsson expressed interest in a recent post on Instagram.

“Interesting. I wonder if he truly believes he can beat me or if he’s just fooling around. What do you guys think?” Hafthor Björnsson shared.

Standing at six foot even, KSI weighed 187.2lbs for his last fight against Logan. Fans question the validity of the fight offer because of the massive size difference compared to Thor. Facing Eddie, Thor tipped the scales at 335lbs, which is only 39lbs from being twice the fighting weight of KSI.

Following his big win against Eddie, Hafthor has been the talk of the town. In addition to the KSI call-out, Martyn Ford, who is scheduled to face The Iranian Hulk real name Sajad Gharibi on April 30, also expressed interest in a fight against Hafthor. Martyn maintains that he would knock Thor out if the two met inside the boxing ring. Ford recently issued a warning to the Iranian Hulk and revealed his weight of 320lbs. Firing back at his knockout comment, Björnsson implied that he would smash Martyn if the two ever met in the ring.

Even though KSI would be nearly half the weight of Björnsson, there is still an appetite to see the strange attraction. While KSI has proven himself in the boxing ring a few times, Thor questions how serious the call-out truly is.