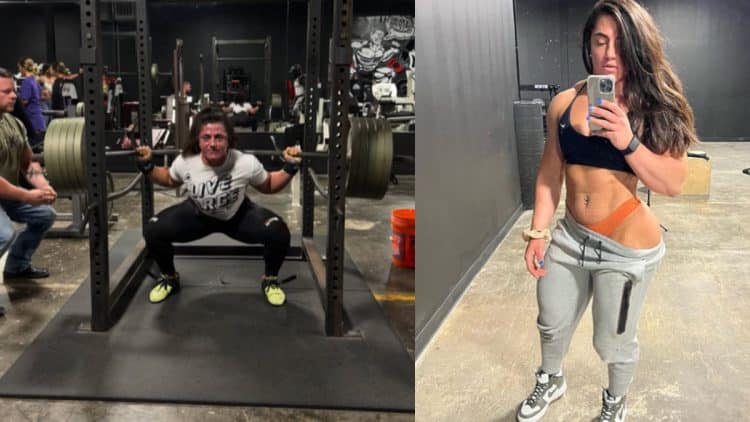 We have already witnessed Hunter Henderson compete twice this year. This involved lengthy and exhausting preparations, so she is now taking an off-season in order to “get healthy and build”. Despite not being in actual preparation for a competition, her lifts did not deteriorate. It is even worth noting that Henderson is improving, as she is now claiming new personal bests in training. Most recently, Hunter posted a 515-pound (233.6-kilogram) squat three rep PR to Instagram.

Hunter Henderson claimed a new PR with the help of knee sleeves, a lifting belt, and wrist wraps. So, according to powerlifting rules, her squat would be considered raw. This personal best means a lot, since Henderson has not used any steroids for the past three months.

“A DAMN GOOD night @flexfitnessgymkc ! Not my prettiest squats by any means but a pr triple after a long weekend at the lake. Pretty cool!”

As of right now, Hunter Henderson has not revealed when her off-season will end, nor what competitions she intends to compete in. It is very unlikely that she will compete soon, but her training lifts show that she would not disappoint.

Judging by Hunter Henderson’s powerlifting list of accomplishments, it is hard to believe that she has been doing the sport professionally for only four years. In that time, Henderson competed in eight sanctioned events and won all of them. She also holds numerous All-Time World Records in the 75 & 82.5-kilogram weight classes.

Despite dedicating a lot of time to powerlifting, Hunter Henderson is also a very successful bodybuilder. In fact, Henderson even earned an IFBB Pro card, having won the 2021 National Physique Committee’s (NPC) USA Championship. She then had only one appearance as a Pro, which was the 2021 IFBB Tampa Pro, where she scored second place, and hasn’t competed since then. It is also not clear if or when she intends to compete in bodybuilding again.

All powerlifting fans know that Hunter Henderson is capable of achieving greatness. However, many did not expect to see these kinds of lifts from her, at this time. Seeing her crush a 515-pound (233.6-kilogram) squat for three reps just makes everyone excited for her next performance. There is a good chance that Henderson will achieve some historic lifts after completing a comprehensive powerlifting program.