World record holding powerlifter Hunter Henderson is making the move to bodybuilding, and she showed off her insane physique while prepping for this debut 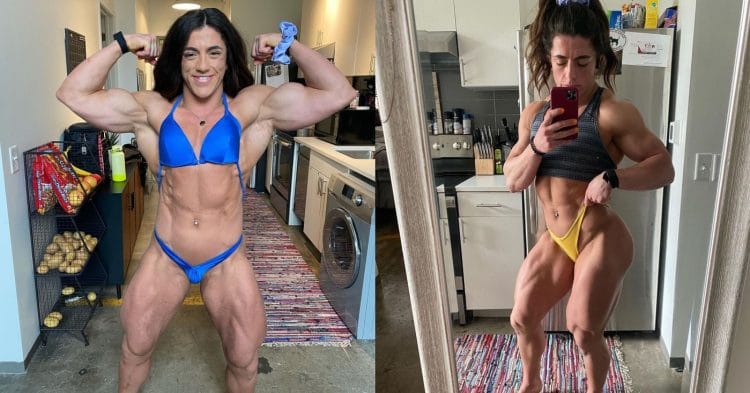 75kg powerlifter Hunter Henderson has all but conquered the world of powerlifting. So she has set her sights on a move to bodybuilding, and looks be in tremendous shape 9 weeks out from this debut.

During her time in the sport of powerlifting, Henderson has established herself as one of the best in the world. Of course, it is hard to argue with that, considering the fact that she holds numerous world records, for both the squat and total in her weight class.

It seems that at 26 years of age, Hunter has established herself as the gold standard in her division, with epic performances at every turn. Even in April, when she competed at the 2021 WRPF Kern US Open, she put on a clinic en route to winning the contest and scoring those records.

However now Hunter Henderson is setting her sights on a different sport. She announced on her social media recently that she was looking to take a break from powerlifting to try her hand at bodybuilding instead.

As it turns out, she looks to be in great shape for this move too, as her updates on social media have revealed. Her most recent update saw her unveiling her shredded legs and midsection with about 9 weeks to go until she makes that debut.

Two words that were not apart of my vocabulary just a month ago have become one of my favorite things to do. As crazy as that sounds, getting up early before work and knocking out my cardio has had an amazing impact on my habits and the person that I am.”

For someone who has not competed in bodybuilding before, Henderson looks pretty solid here. However that was not even the most impressive update she has given in the last few days.

Prior to this more recent look, Hunter shared a detailed glimpse into her physique while donning a posing suit, and hitting a variety of shots. Here she revealed that she will compete at an NPC show in Nebraska on July 10th, and she certainly looks the part.

Hunter Henderson is not the first powerlifter to try bodybuilding, or vice versa, but she definitely has a lot of promise on stage. Her physique is one of the most insane in powerlifting, and it will be interesting to see how that translates to the stage.

It is unclear at this time, what division she will be competing in, but she seems intent on taking the stage in the Women’s Bodybuilding side of things. If successful here, you can bet that this will not be the last time we see her strut her stuff on stage, either.

Nick Walker Shoots Down Blessing Awodibu’s Posing Comments: ‘I Don’t Think He’ll Match Up With Me’