"The Mutant" says Lunsford has the potential to defeat big names in Men's Open but not the top five: "Yes, he has shape, he has size, but I don't think he has the size to overpower the top five that was there last year." 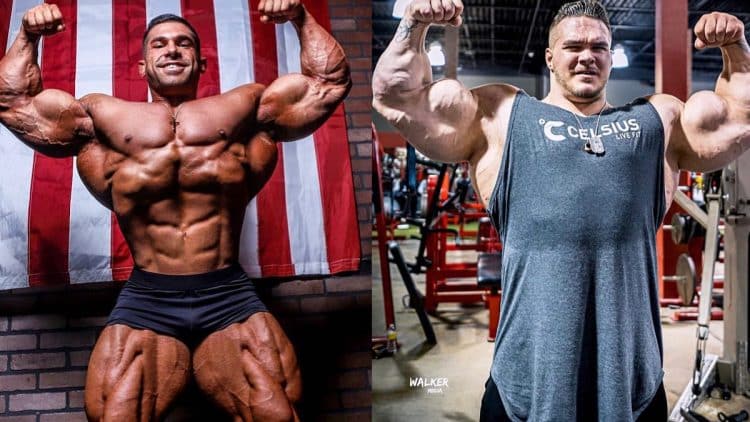 Lunsford is a 212 competitor, having reached the pinnacle of the sport last year en route to defeating former 212 Olympia champion Shaun Clarida for the title. Currently, Lunsford is not qualified to compete in the Open at 2022 Olympia, just the 212 division. Nevertheless, Lunsford says he is training at 100% day in and day out, regardless of which division he ends up competing in.

2019 Mr. Olympia Brandon Curry called out Lunsford last week in an interview. Joined by Shawn Ray and eight-time Mr. Olympia Lee Haney, Curry said he doesn’t care where Lunsford goes, but if he intends to do the Open, Curry said he’ll ‘whoop his ass.’

While Lunsford has the opportunity to compete and win an IFBB Pro show to punch his ticket, others believe he should receive a special invitation from Olympia brass instead. Mr. Olympia President Dan Solomon gave his thoughts on Lunsford and revealed that Derek is ‘nowhere near 212 at this point,’ further suggesting that a special invitation is being discussed.

Speculation about a switch reached a high after Lunsford attracted attention in May guest posing in place of an absent Big Ramy at the 2022 Pittsburgh Pro show. Fans were taken aback by the 212 competitor’s size and ability to stand next to top Men’s Open bodybuilders like Brandon Curry, Hunter Labrada, and Nick Walker. “The Mutant” has trained with Lunsford and recently gave his thoughts on how the 212 competitor would do in the Open class.

In a recent video, Walker gave his take on the Derek Lunsford situation and how he believes the reigning 212 Olympia champion would fare against other elite Men’s Open bodybuilders.

After being asked who he thinks Lunsford could beat in the Men’s Open division at 2022 Mr. Olympia, Nick said ‘yes’ to Derek beating Iain Valliere, and said he could ‘possibly’ defeat William Bonac. When asked about himself and Hunter Labrada, Walker believes that Lunsford could win in the future, but not this year.

“Here’s why. I’ll tell you why. He’s not been able to have a full off-season right. Yes, he has shape, he has size but I don’t think he has the size to overpower the top five that was there last year. But now, if you get the Open this year and he has a full off-season to really grow his physique and keep that same shape and structure… it is what it is.”

For Walker, one major question surrounding Lunsford is his ability to grow without sacrificing his leanness or conditioning. Walker has posed and trained alongside Lunsford. He is adamant that Derek is dangerous for everyone, even in the off-season, weighing 225-230-pounds.

“Whatever happens on stage is going to happen on stage. I know what Derek looks like and he’s like 225-230, and he’s very dangerous. If he goes to the Open and goes to that weight and maintains that weight, and he just gets harder and leaner, he’s dangerous.”

Walker says that Lunsford’s coach Hany Rambod understands how to ‘bring the best’ out of someone, which will play into Derek’s hand should he make the transition.

“The thing with him is he’s not fat, he’s very lean. Nick added. “Whatever Hany [Rambod] and Derek do, it seems to click. You know what Hany is very good at in my opinion, he knows how to bring the best out of someone. He makes you feel comfortable. For like the mental state of a competitor, Hany is very good at keeping people calm.”

Rambod has also been vocal about Lunsford’s size and revealed that it’s becoming ‘very difficult’ for him to make the weight for 212. According to Rambod, the move to Open is something they are ‘having to consider’ at this juncture.

Another top name in the sport who thinks Lunsford will do good in the Open is four-time Mr. Olympia Jay Cutler. The bodybuilding legend went so far as to suggest Lunsford could place in the top three on his first try in the new division. Like Walker, Cutler also echoed how ‘dangerous’ Lunsford would be assuming he competes in the Open division later this year.

RELATED: Nick Walker and Hunter Labrada Train Together Ahead of 2022 Olympia: ‘We Want to Face Each Other at 100%’

Given Nick Walker’s expectations of Lunsford, this year’s Mr. Olympia contest will be one of the most competitive shows in the organization’s history. It remains uncertain if Lunsford will receive a special invitation, but Walker seems confident Lunsford will before he makes his way to 2022 Olympia.