Labrada obliterates the first of his last four leg workouts before the 2022 Olympia. 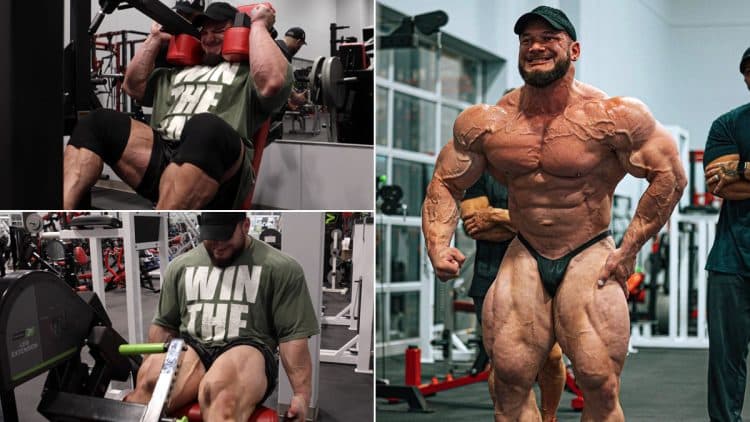 Hunter Labrada is carefully approaching his training in hopes of improving his standing at the 2022 Olympia compared to the last year by bringing a perfect physique to the stage. Labrada is an IFBB Pro bodybuilder and one of the top contenders in the Men’s Open division. He is the son of bodybuilding legend Lee Labrada and has inherited the passion, capability, and genetics to become a top-tier bodybuilder. The 30-year-old earned his IFBB Pro card by winning the 2018 NPC National Championships. Labrada has won two pro bodybuilding shows so far in his career.

The 2020 Tampa Pro win earned him a direct qualification to the 2020 Olympia, where he finished eighth. The Labrada scion then went back to the drawing board and won the 2021 Chicago Pro to qualify for the 2021 Olympia and bulldozed his way into the top five, finishing fourth at the show.

Labrada is in the middle of his competition prep for the 2022 Olympia, where he will face some familiar foes like Nick Walker and Hadi Choopan as well as highly touted fresh entrants like Andrew Jacked, Michal Krizo, and Blessing Awodibu. The 2021 Chicago Pro winner’s progress seems to be on point as he looked shredded in a recent physique update.

Labrada routinely shares bodybuilding wisdom and workout tips on his Youtube channel. Despite the busy training schedule, he discussed the importance of good quality sleep and tips to grow legs on the hip adduction machine. Labrada crushed a complete lower body workout as part of his competition prep. The video of this session was uploaded on his YouTube channel. So without further delay, let’s see how Labrada worked his legs.

Labrada is training his legs once every nine days and therefore has approximately four leg workouts due until the 2022 Olympia. In this training session, he performed compound and isolation movements for complete lower body development from the glutes all the way down to the calves.

The Labrada scion started the workout with this isolation movement. Besides targeting the hamstrings, leg curls are effective in warming up the knees. While lying leg curls are a more popular hamstring exercise, studies show that seated leg curls are more effective in hamstring development as they provide a greater range of motion. Labrada performed a few sets of this exercise and moved to the next isolation exercise.

The 2020 Tampa Pro winner performed leg extensions next. It is an isolation movement that targets the quadriceps. During this exercise, the knees act as a lever. The weights are lifted from the ankle while the butt acts as the stationary point. The 30-year-old explained that when the weight is heavier, you tend to lift your butt a little bit to assist with the lift, resulting in a reduced range of motion.

Labrada adjusted the seat so that his knees were at a higher level than his butt and strapped himself to the seat. This helped him isolate the quads to a greater extent. After performing a few solid sets of this exercise, Labrada jumped into more intense compound movements.

The pendulum squat is an ideal compound movement for overall thigh development. However, the main emphasis lies on the quadriceps and glutes. The pendulum squat can be modified for greater hamstring stimulation by adjusting the foot placement. Labrada performed a few heavy sets of this exercise and took to the next one.

Labrada took to this bodyweight movement next. Apart from working the quads and hamstrings, walking lunges also strengthen the core, glute, and hip muscles. Labrada performed a few sets of this exercise with slow and controlled movements before jumping into the next exercise.

While the glutes, hamstrings, and quads occupy the largest portion of the lower body routine for most people, the adductors are often ignored. However, since Labrada is gunning for the Sandow, he is not leaving these muscles unattended. Adductors are present on the inside of the thighs. They help bring the legs together and stabilize the pelvis and trunk when standing on one leg.

“Whenever you’re doing this, you want to maintain a degree of neutrality in terms of external and internal hip rotation,” Labrada said about the technique to do this exercise.

The 2021 Chicago Pro winner performed a few sets of hip adductions on the machine and took to the final exercise of the day.

Labrada wrapped up the training session with a few sets of standing calf raises on the Icarian machine. As opposed to the seated calf raises, the standing variation works the gastrocnemius muscle.

Labrada will enter the 2022 Olympia with a goal to dethrone reigning champion Mamdouh ‘Big Ramy’ Elssbiay. However, the Men’s Open division roster is flooded with talent, and the veterans and newcomers are all working towards a similar goal.

Labrada edged out Walker for the fourth position at the 2021 Olympia, and the latter intends to beat Labrada with conditioning this year. If Labrada continues to train with furious intensity and discipline, he can undeniably emerge on top when results are announced on Dec. 18.

You can watch the full workout video below, courtesy of Hunter Labrada’s YouTube channel: