In his latest Tuesday Tip, Hunter Labrada gave insight on how to build complete legs: "We make our legs look bigger by developing our adductors." 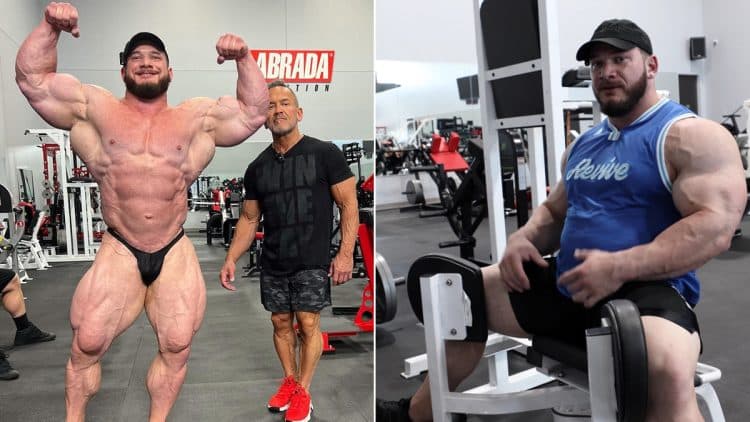 Hunter Labrada is in the heat of preparations for 2022 Mr. Olympia but carves out time to share tips for aspiring athletes and bodybuilders. In a recent video, Labrada demonstrated how to build complete-looking legs using the adductor machine.

Labrada, son of bodybuilding Hall of Famer Lee Labrada, is keeping busy ahead of his third Mr. Olympia appearance. In preparation for bodybuilding’s biggest show of the year, he’s focused on improving and recently showed off some of the gains he’s made with a demanding arm workout.

When it comes to training, Labrada routinely shares knowledge relating to many of the workouts he deems as most important. One video saw him explain how to build bigger triceps with overhead cross cable triceps extensions.

The latest ‘Tuesday Tip’ Hunter Labrada handed out was on the importance of sleep in regard to rest, recovery, and muscle development. He stressed that maintaining a low core body temperature is paramount for recovery. In addition, he’s limiting his time on electronic devices due to the blue light they emit, which can affect sleep quality. This time, however, Labrada is sharing his best tips for creating more complete legs.

“I get asked about it so often, and that is, how to make your legs look bigger. And no, this isn’t a video on how to improve your sweep. So, obviously when you talk about your legs looking bigger, everyone is so focused on putting as much meat as possible on their quads. Absolutely, a great focus to have. That focus absolutely should not shift,” Labrada said.

The Men’s Open standout says many people lack adductor development because they prioritize their quadriceps only.

“What I see more often than not though, that focus is completely lacking on the inside of your leg. So I can’t tell you how many people I’ve seen with great quadriceps development but then they have a thigh gap all the way up to their nut sack and it makes their legs look incomplete.”

“In bodybuilding, the more negative space you eliminate — negative space being like gaps in your physique, whenever you’re posing — the bigger you’re going to look. Think about Dorian Yates hitting a lat spread, you know from behind there’s literally no gap between his arm and his back. It’s like this huge meat blanket.

Think about Ronnie Coleman’s legs, it’s a great example for this. You know, he’d have his legs staggered wide but his adductors would literally be touching all the way down to his knees almost. Keep on focusing on your quad sweep but this Tuesday Tip is on the adductors,” says Hunter Labrada.

Even though adductors are often neglected, he believes they are essential for complete legs.

“By focusing on your adductors — by making it a priority — the same way you prioritize your quad development or your hamstring development, you’re going to have a very complete looking leg. Your front shots — you’re not going to have any thigh gaps. They’re going to be touching all the way down to your knee eventually.

“It’s a very often neglected muscle that can make a huge difference in what your leg development looks like,” Hunter Labrada shared.

“We make our legs look bigger by developing our adductor. Let’s actually talk about how to perform [on] the adductor machine. The biggest thing for this is you want to have stability. Just like we have in all of our other exercises, how do we have stability in this? You’re going to have stability by keeping a neutral spine — not letting your hips roll out.”

He added that you shouldn’t push with your feet but instead drive with your knee.

“You’re going to grab these handles; they are there for a reason and pull yourself in as hard as you can. Think about with your leg — maintaining a degree of neutrality in terms of internal external rotation and think about driving from the inside of your knee. You don’t want to be pushing with your feet at all. You should be able to take your legs off and think about bringing your knees together.

Getting to a full stretch — and then a full contraction. Like everything else, own the negative and contract as hard as possible. This is the way that we’re going to isolate our adductor,” Labrada explained.

Even though he’s preparing for 2022 Mr. Olympia, Labrada doesn’t miss an opportunity to connect with his fans. He met up with his father Lee at their home gym Labrada Nutrition to get his biceps measured at the beginning stages of his contest prep. While Hunter doesn’t believe his guns are bigger than rival Nick Walker‘s, they did measure at an impressive 22-and-a-half inches.

RELATED: Nick Walker and Hunter Labrada Train Together Ahead of 2022 Olympia: ‘We Want to Face Each Other at 100%’

Labrada is working hard to produce an improved package for his next bodybuilding show. He believes taxing his body on the adductor machine is a great way to build more complete legs.