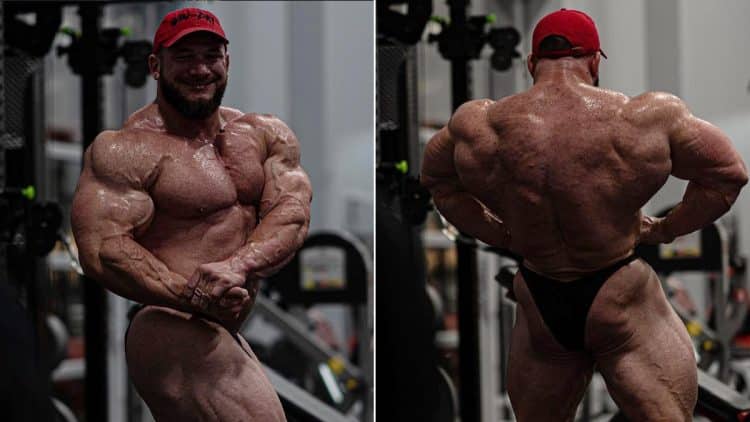 Preparations for the upcoming 2022 Mr. Olympia are in full swing. In a recent post made on Instagram, Men’s Open standout Hunter Labrada shared an impressive physique update six weeks from the upcoming Olympia, scheduled for Dec. 15-18 at Planet Hollywood Resort & Casino in Las Vegas, Nevada.

Hunter Labrada, son of IFBB Hall of Famer Lee Labrada, is slated to make his third appearance at the Olympia. After earning his first Olympia invite with a win back at the 2020 Tampa Pro, Labrada finished eighth in that appearance. Last year, Labrada improved his standing to fourth place behind pros, Hadi Choopan, Brandon Curry and champion Mamdouh ‘Big Ramy’ Elssbiay.

Labrada has been working relentlessly through the off-season and contest prep to bring his best look. Although he follows a busy schedule, he always takes the time to share his training insight with over 332k followers on Instagram.

Last month, he shared tips on how to get bigger arms while performing a sleeve-busting arm workout. In another ‘Tuesday Tip,’ Labrada gave his take on growing legs using the adductor machine. He encouraged his fans not to neglect the importance of developing adductor muscles as it makes the legs look much fuller.

Hunter is determined to dethrone the dominant ‘Big Ramy.’ In a physique update with his father Lee, Hunter revealed that he was tipping the scales at a gigantic 285 pounds. He performed an arm workout while being pushed by his dad as of late.

Besides the champion, Labrada will face intense competition from fellow standout Nick Walker. ‘The Mutant’ enjoyed a stellar 2021 season, taking home the top prize at both the New York Pro and the Arnold Classic. The rivalry between Walker and Labrada is professional, but fierce. According to Walker, he is prepared for another battle with Hunter and believes conditioning will decide the better of the two.

In a recent post made to his Instagram account, Labrada showed off his insane arms and back development courtesy of a physique update less than two months from this year’s O.

“No stones left unturned. Ever since @squatlikechow got to Houston, @dean_the_great_white_ifbbpro and I have been posing 9 rounds a day, alot of them together so neither of us are sandbagging. At this point, I can say I’ve already posed more for conditionings sake than I normally do during an entire prep, and we still have 5 weeks to get better. Do your homework.”

Hunter Labrada revealed that he had been posing a lot every day since coach Ben Chow touched basis with him. He feels confident with his posing skills and is confident he will get even better in the coming weeks.

Given the talent showcased in the top five from last year, most agree this Olympia has the potential to be one of the greatest ever. Bodybuilding legend Jay Cutler has also mentioned how excited he is for this contest.

Previously, Labrada gave another sneak peek into his preparations for the Olympia. He showed off his incredibly jacked physique in a posing routine while weighing 290 pounds fasted. If the latest updates are any indication, Hunter is on track to bring his best version to the Olympia stage.