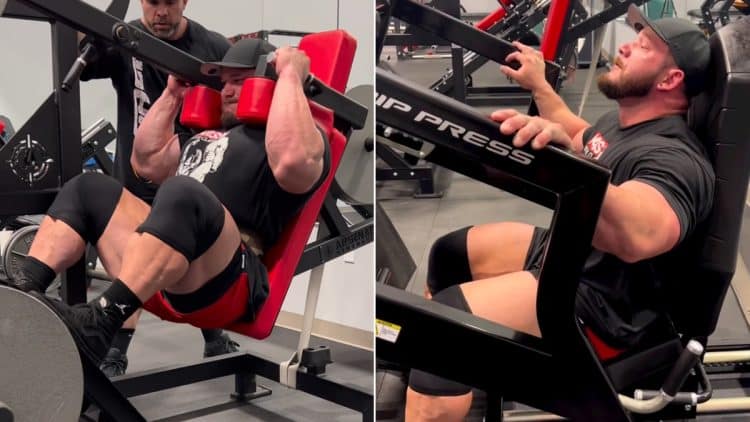 Hunter Labrada, son of bodybuilding legend Lee Labrada, has emerged as one of the strongest talents in the Men’s Open division. In recent videos posted on Instagram, Lee and Hunter Labrada shared their signature leg training exercises ahead of the upcoming 2022 Olympia.

Hunter made headlines in the community after he earned his IFBB pro card with an impressive win in the super heavyweight and overall divisions at the 2018 NPC National Championships. Years later, he managed to secure a spot at the 2020 Olympia and placed eighth after he crushed his pro debut at the 2020 Tampa Pro.

Labrada went on to win the 2021 Chicago Pro, one of his biggest victories, and looked like a serious threat to Big Ramy’s dominance on the bodybuilding stage. Although Labrada could not dethrone Ramy, he received major praise from bodybuilding icons such as Jay Cutler, who believes Labrada will still be a top contender at this year’s show.

Labrada has been working hard under the guidance of his father, Lee, to bring an improved package this year. His father, Lee, has a wealth of experience in the sport and was known for his aesthetics and excellent conditioning.  Recently, Hunter showed off a stellar physique in an update where he shared a push day workout with his 324K followers on Instagram.

“This is what training to win Mr. Olympia looks like, LABRADA-style. Kicking butt on one-legged presses …INTENSITY,” Lee wrote.

“Taking every day for what it is right now: another opportunity to get better at what I love to do

A lot of people talk about how bad they want it. I’m looking forward to showing y’all how bad I want it for the next 16 weeks,” Hunter reported.

Hunter can be seen doing the pendulum squat in the first video. He reported that he was using 4 plates with a grey band and performed the exercise for 16 reps. Hunter expressed his excitement at showing off his improved physique at this year’s Olympia, set for Dec. 15-18 at Planet Hollywood Las Vegas Resort & Casino.

Lee joined his son in the second clip for hip presses, motivating Hunter to push his limits with more intense training.

Hunter Labrada recently showed off his gigantic biceps after doing a grueling arm workout session. The pump from the training was evident as Hunter had his arms measured at 22 and a half inches by Lee. With under 16 weeks until the Mr. Olympia, Hunter Labrada is determined to bring the best package of his career.