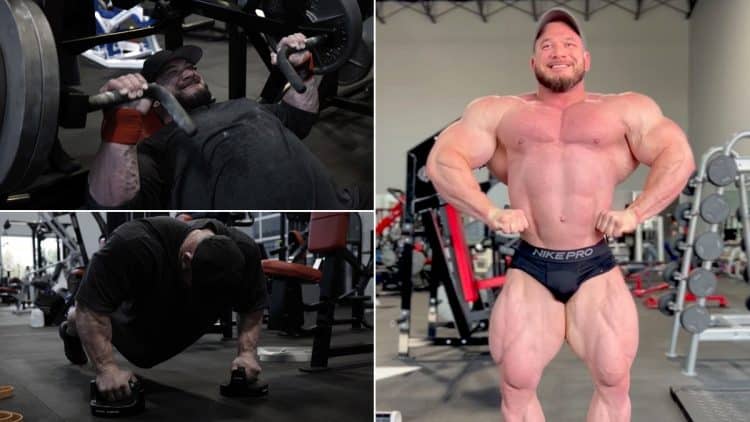 Hunter Labrada is an Open division professional bodybuilder and son of the legendary bodybuilder Lee Labrada. After earning his pro card with a first-place finish in the super heavyweight and overall divisions at the 2018 NPC National Championships, Labrada has participated in a total of four pro bodybuilding competitions. His pro debut at the 2020 Tampa Pro won him a spot at the 2020 Olympia, where he finished eighth.

With his win at the 2021 Chicago Pro, the Labrada scion emerged as a serious threat to Big Ramy’s Olympia throne. However, the 30-year-old took home the fourth spot at the 2021 Olympia.

Labrada recently started his 2022 Olympia prep and this push day workout was his second training session of the prep. The video of this workout was uploaded on Labrada’s YouTube channel.

Labrada started the workout with the seated cable fly to warm up his muscles and joints and get the blood flowing. After performing a few sets, the elite bodybuilder felt comfortable jumping into heavier sets and moved on to the next exercise.

Labrada chose the plate-loaded machine for this exercise and jumped right into heavier sets. He started with three plates on each side and did the final set with four plates. The 30-year-old took a good whiff of smelling salt before getting into his final heavy set.

“The intersection between exercise selection, execution, and intensity is where the magic happens. One without the other two is absolutely f* pointless.” Labrada said in between sets.

The 2021 Chicago Pro champ next targeted the lateral and anterior deltoid heads with the cable side lateral raise. After performing a few sets on the cable machine, Labrada moved on to the next exercise.

The push-up is a compound movement that activates all the muscles required for pushing and helps improve functional strength. Labrada started with resistance band push-ups to failure and finished the exercise with regular push-ups, done to failure.

After a short rest period, Labrada took to seated side lateral raises on the machine. He chose the weight with the goal to reach failure between 10 to 12 reps in the first set. This exercise served as the finisher of the exhausting push day.

Hunter Labrada guest posed at the 2022 NPC Ronnie Coleman Classic as he received a special invitation from the King of Bodybuilding. While speaking about the opportunity, Labrada said:

“This is going to be cool, and a little-known fact—the first show I ever did at the Branch Warren where I won my Classic was actually in this building. So, cool to be back here as a pro. Even cooler that Ronnie Coleman asked me to come guest pose at the show.”

Labrada stated that, in his books, Ronnie Coleman is the greatest bodybuilder of all time. He felt overwhelmed by the fact that Ronnie knew of him and invited him to guest pose at the show. When Labrada stepped on stage, one could not help but notice his conditioning. The loud roars from the crowd and sheer excitement were testimony to Labrada’s insanely sculpted and stage-ready physique.

Hunter Labrada’s near-stage-ready physique during the guest posing at the NPC Ronnie Coleman Classic will definitely not go unnoticed by his competitors. Reigning champion Mamdouh ‘Big Ramy’ Elssbiay, Brandon Curry, and rising contender Nick Walker are arguably the biggest obstacles in Labrada’s Olympia dream. Nevertheless, recent physique updates and workout videos from these competitors show that it will be a fierce battle for the top spot when Olympia returns to Vegas on Dec. 15, 2022.