Iron Biby set a new world record for the axle press, taking it from Eddie Hall who congratulated him on the achievement 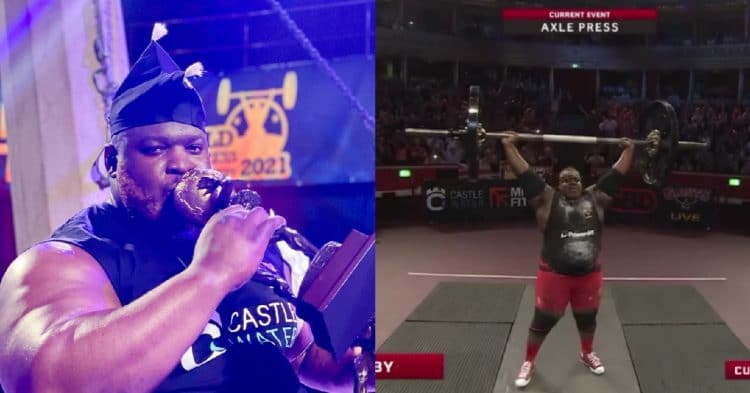 As they say, records are meant to be broken. That was the case with Iron Biby over the weekend, who not only earned the axle press world record, but also the respect of the man that he took it from.

With new records being set left and right, the sport of strongman has seemingly never been hotter. It serves as proof of how much the sport and the athletes are improving and how far the sport is coming as time goes on.

This was perhaps no better displayed than over the weekend, when Burkinabé strongman Cheick “Iron Biby” Sanou landed himself a new world record. He did this, by pulling off a 217kg (478.4lb) axle press to snatch the record held by Eddie Hall before this, which the Englishman congratulated him on with a post to his Instagram.

Of course, Eddie could not resist taking a few shots at Thor while congratulating Iron Biby, taking some digs at Hafthor Bjornsson’s deadlift world record. The two were supposed to fight in September but the fight has been delayed after an injury from Eddie.

Taking to his own Instagram after the contest, Iron Biby reacted to his performance and the new world record. Here he showed nothing but class, paying respect to Eddie, while thanking his friends and family for their support to help propel him to this point.

“WHAT A SPECIAL NIGHT ✨

Was an honor to compete at ROYAL ALBERT HALL . It’s is an iconic arena and the right place for me to Break axle the world record owned by the beast @eddiehallwsm . He is a great man and he inspired to do it . God bless him🙏🏾” Biby wrote.

“Will never forget this day . The electricity in there was the best. The Crowd was unbelievable. You all helped me to make this happen. BIG THANK YOU 🙏🏾”

In this post, Iron Biby says that he is looking to get the log lift world record for his next goal, which is a rather feasible task. Hopefully it will not be another two years without competing before he is able to attempt that.