With a Pro card on the line at his next contest, bodybuilder Michal Krizo is leaving no stone unturned in preparation for the event. 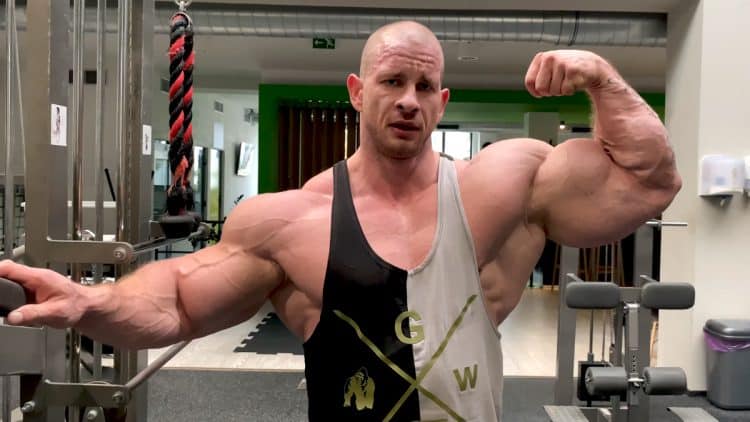 Michal Krizo is dialing in preparations as he makes his way to his next bodybuilding contest. In a recent video, Krizo shared a high-volume biceps-focused arm workout two weeks from the 2022 Amateur Olympia Italy show.

This year, Michal Krizo switched from the IFBB Elite Pro League to the NPC. He also went on a legends tour in North America, visiting some of the most respected figureheads in the sport. Krizo’s first stop was at the Dragon’s Lair Gym in Las Vegas to see bodybuilding coach Milos Sarcev. Sarcev, who coaches a number of high-profile Men’s Open competitors, said Krizo is the real deal and plans to make an impact in the new league, assuming he earns a Pro card, of course.

Next, Krizo paid a visit to four-time Mr. Olympia Jay Cutler. Following the encounter, Cutler said Krizo made a lasting first impression. He labeled Krizo as dangerous before mentioning that his striated muscle fibers remind him of bodybuilding legend Phil Heath.

Bannout is so confident in Krizo that he thinks he will win Mr. Olympia if he’s able to earn a qualification in time. In the past, Samir has suggested that Krizo has bigger arms and a better v taper than fifth place 2021 Olympia finisher Nick Walker.

During a recent Q & A, the Slovakian native gave his thoughts on how he might perform at 2022 Mr. Olympia. While he would obviously need to win a Pro card and Pro show first, Krizo believes he will place in the top 10 at this year’s Olympia contest, and then top six at next year’s (2023) Mr. Olympia. With only two weeks until his NPC debut, Krizo shared one of the workouts that has helped him build massive arms.

Find a full list of Krizo’s arm workout below:

This isn’t the first workout Krizo has shared in preparation for the upcoming show. He recently showed off a demanding back workout and followed it up with an impressive posing routine.

But it’s not just training sessions that Krizo shares, he has also kept fans updated on his diet and supplement stack. The mass-monster revealed his full day of eating — it includes ‘six big meals,’ many of which are made with rice porridge.

Despite being a relative newcomer in the NPC, the 32-year-old is planning to be ‘as big as possible’ when he makes his way to the Amateur Olympia Italy stage. In just two weeks, fans and followers will get to see if the hype behind Michal Krizo is real.

Leg Extension vs. Leg Curl: A Definite Guide from Experts