No Result
View All Result
Tools
Fact Checked
Fact Checked
This article was written by one of our qualified writers, and fact-checked by our experts. The numbers in parentheses (e.g. 1, 2, 3, etc.) throughout the article, are reference links to peer-reviewed studies.
Our team of experts include a board-certified physician, nutritionists, dietitians, certified personal trainers, strength training experts, and exercise specialists.
Read Our Editorial Process

Check out the average one-rep max pull-up and chin-up for your weight and how you stack up against your peers. 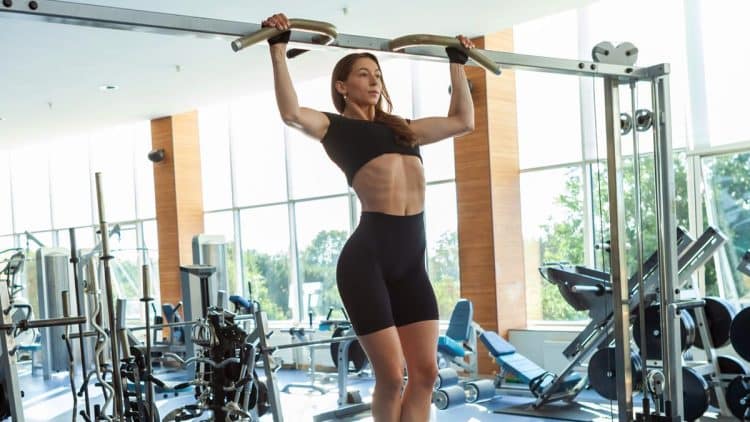 Average Pull Up And Chin Up By Weight

Pull-ups and chin-ups are a staple in most strength training routines. They are also the exercises most beginners use to determine their strength level.

The pull-up and chin-up are compound (multi-joint) exercises that train your lats (primary) and abs, biceps, shoulders, and upper back (secondary).

Performing a pull-up and chin-up requires upper body strength. Anyone who doesn’t have strong arms, shoulders, back, and core cannot perform a bodyweight pull-up.

Most people confuse both exercises and use them interchangeably. Ask a rookie about the difference between the two, and they’ll probably tell you that both exercises are the same, except that in a chin-up, you’re supposed to take your chin over the pull-up bar. While in the other movement, you only have to bring your face to the bar’s level.

However, the grip is the only difference between the two exercises. While performing a pull-up, you need to grab the bar with a shoulder-wide overhand (pronated) grip. On the other hand, a chin-up requires you to grip the pull-up bar with an underhand (supinated) grip.

Notably, both variations require you to pull your chest as close to the pull-up bar as possible.

A majority of exercisers find chin-ups to be the easier alternative as it involves greater biceps recruitment than the conventional pull-up. Nonetheless, some lifters might prefer the pull-up over the chin-up due to their training regimen, body proportions, and muscle firing patterns.

In this article, you’ll learn about the average pull-up and chin-up by gender, weight, and experience level, how to perform the exercises with the correct form, and get better at the lift.

Factors like your body weight, experience level, and gender can have a role in determining how much weight you can pull.

The tables below will help you find how you stack up against lifters at your level. The numbers below represent the one-rep max (1RM) for people at different experience levels and weight classes.

Note: The weights mentioned in the tables below represent added resistance. For example, +100 means body weight plus hundred pounds. On the other hand, a negative number (-10) represents a 10-pound assistance, translating to body weight minus ten pounds.

Average Pull-Up For a Man 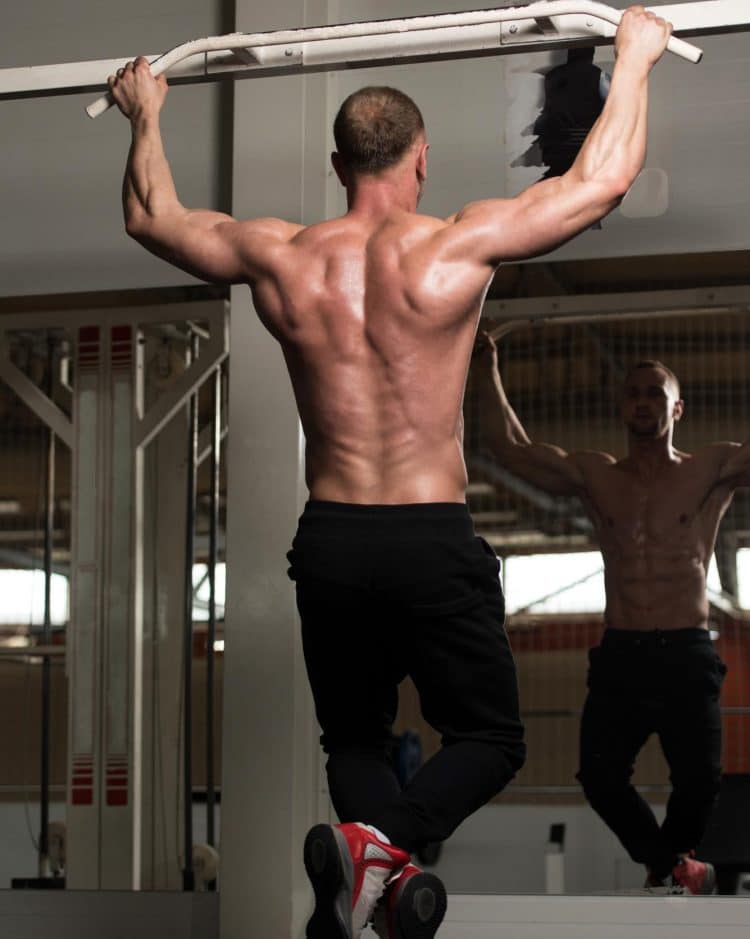 The average male pull-up depends on several factors, including a lifter’s age, weight, and experience level.

Below is the Male Pull-Up Standards chart from Symmetric Strength:

Unlike the deadlift, squat, or bench press, the performance of an average untrained male on the chin-up and pull-up is negatively correlated to their bodyweight, especially after they cross the 165-pound mark.

After a linear rise, the added resistance used by beginners to world-class athletes plateaus at the 198 to 220-pound range and then drops off for heavier folks. Notably, lifters in the 242 to 320-pound group end up pulling more than their lighter peers because of their bigger structures.

Average Pull-Up For a Woman 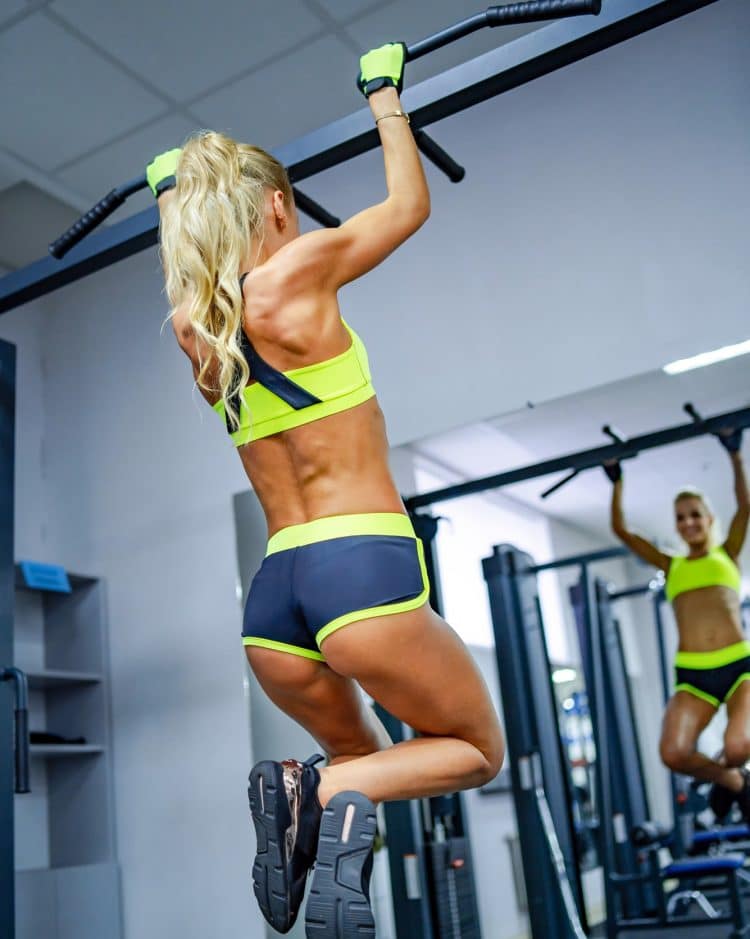 Women’s pull-up performance, too, is linked to their weight, age, and experience level.

Below is the Female Pull-Up Standards chart from Symmetric Strength:

Compared to their male counterparts, untrained and beginner female lifters are considerably weaker at the pull-up. They match their untrained male peers at the intermediate experience level in relative strength.

Here is what the overall average pull-up weight for males and females looks like:

Per the Centers for Disease Control and Prevention’s National Center for Health Statistics (CDC), an average American male weighs 197.8 pounds, meaning an average man who doesn’t lift could perform a single pull-up with a five-pound assistance. On the other hand, an average rookie lifter could pull 20 pounds of added resistance for one rep. [1]

The average added resistance on a pull-up for an American intermediate lifter is 45 pounds, 75 pounds for proficient, 105 pounds for advanced, 135 pounds for exceptional, 160 pounds for elite, and 185 pounds for world-class athletes.

Per the CDC data, an average American female tips the scales at 170.5 pounds. As per the table from Symmetric Strength, a 165-pound woman (closest to 170.5 pounds) with no lifting experience would need a 30-pound assistance to complete a single pull-up, while a novice lifter would require a 20-pound assistance.

Furthermore, an average intermediate lifter would require a five-pound assistance to complete a pull-up. On the other hand, an average proficient lifter could perform a pull-up with 15 pounds of additional resistance, 30 pounds for advanced, 50 pounds for exceptional, 70 pounds for elite, and 85 pounds for world-class athletes.

While pull-up and chin-up are similar exercises, the weight you can use in each exercise differs due to different grips. A lifter can, on average, lifter heavier on the chin-up than the conventional pull-up due to greater biceps engagement.

Average Chin-Up For a Man 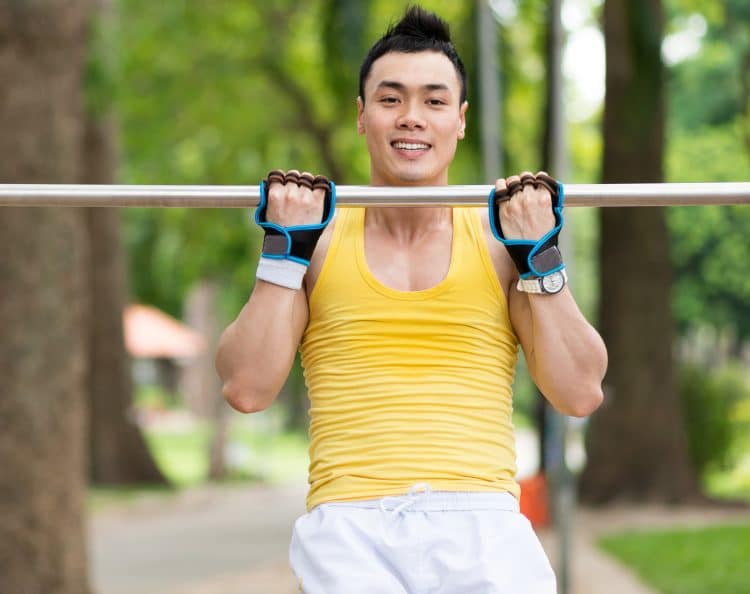 Like the pull-up, the average male chin-up depends on several factors, including a lifter’s age, weight, and experience level.

Below is the Male Chin-Up Standards chart from Symmetric Strength:

Untrained and novice males, on average, can lift the same amount on the pull-up and chin-up. However, there is a linear improvement in the performance of male lifters from the intermediate experience level up to the world-class level.

Average Chin-Up For a Woman

Women’s chin-up performance, too, is linked to their weight, age, and experience level. 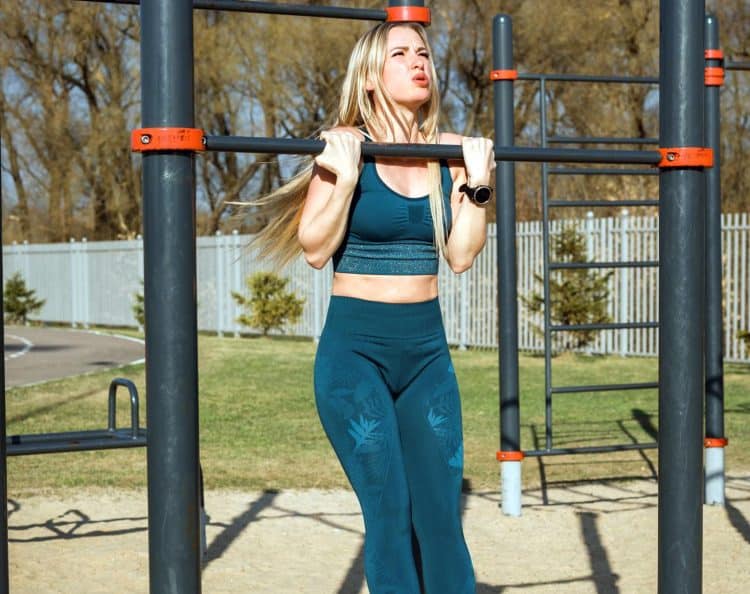 Below is the Female Chin-Up Standards chart from Symmetric Strength:

While an average man’s strength on the chin-up increases with experience level compared to the pull-up, it is not the same for women.

Untrained women, on average, require a 30-pound assistance on both — chin-up and pull-up. However, women can usually pull five pounds more on the chin-up than the pull-up.

Here is what the overall average chin-up weight for males and females looks like:

An average American male weighing 197.8 pounds who doesn’t lift requires a five-pound assistance to complete a chin-up. However, a novice lifter could perform a chin-up with 20 pounds of added resistance.

An average American female tipping the scales at 165 pounds (closest to 170.5 pounds) with no lifting experience would need a 30-pound assistance to complete a single pull-up. A novice lifter would require a 15-pound assistance, and an average intermediate lifter could perform a single bodyweight pull-up without help.

On the other hand, an average proficient lifter could perform a pull-up with 20 pounds of additional resistance, 35 pounds for advanced, 55 pounds for exceptional, 75 pounds for elite, and 90 pounds for world-class athletes.

How to Perform a Pull-Up

This is how to perform a pull-up with the correct form:

Check out our pull-up guide to learn how to perform the exercise for achieving muscle hypertrophy.

How to Perform a Chin-Up

Follow the steps laid below to get the best bang for your buck while performing the chin-up:

Check out our chin-up guide to dig deep into the exercise and learn about its variations and alternatives.

How To Get Better at Pull-Up and Chin-Up

Given below are steps to get better at both lifts:

Which is better? Pull-up or chin-up?

Both exercises target your muscles differently and deserve a place in your training regimen. You could alternate between the two to ensure you’re not leaving gains on the table.

Can I perform pull-ups every day?

Yes. Arnold Schwarzenegger performed 50 chin-ups as a warm-up on his upper-body training days. There is no reason why you shouldn’t do the same.

Pull-ups and chin-ups are incredibly effective upper body exercises and should be a part of every exerciser’s training regimen. They help build functional strength and can add to the width of your back.

Use the charts above to check how you stack up against folks in your weight class and experience level. Alternate between both exercises to get the best of both worlds.