Jay Cutler explains the reasons for incorporating the unusual shoulders and legs split in his training routine. 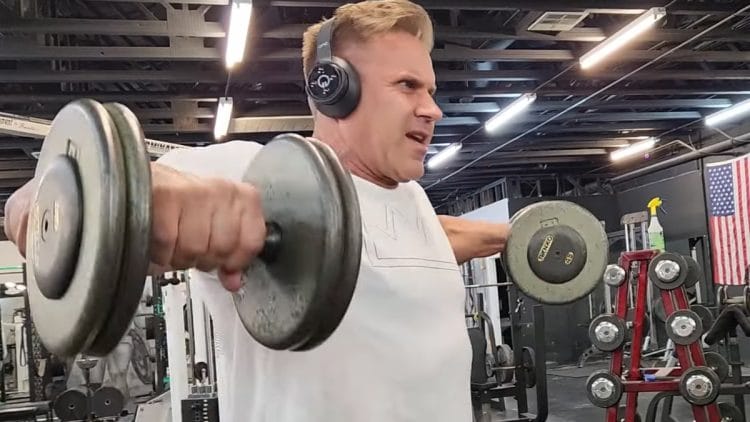 Bodybuilding legend Jay Cutler recently shared a shoulders and leg workout. Cutler is a four-time Mr. Olympia winner and hailed as one of the greatest bodybuilders of all time. He claimed the Mr. Olympia title in 2006 by ending Ronnie Coleman’s eight-year undefeated run and emerged as a formidable force in the Open Pro division. Jay Cutler is also one of the very few bodybuilders that were able to finish their bodybuilding career without any major injuries or health issues that accompany the bodybuilding lifestyle.

The 48-year-old recently shared a shoulders and legs workout on his YouTube channel and unveiled his new Tesla Plaid X electric car. While shoulders and legs might seem as an odd split to have, Jay Cutler explained the logic behind clubbing these two body parts for a training session and explained:

“I had a little time where I missed a couple of days last week. So I have been kind of focusing on certain body parts just a little more. Sometimes I like to change (the routine) up just to kind of shock the body a little bit.”

Jay Cutler’s shoulder workout involved moderate weights and a conscious effort to work the rear delts – a part that many individuals neglect. The legs workout also focused on all major muscles in the lower body. Here is the summary of Jay Cutler’s training session:

Jay Cutler started the workout with standing machine lateral raise. It is a compound movement that works majority of the muscles in the shoulder region. Shoulders are an important joint and muscle group to perform everyday activities. Lateral raises help improve the strength and prevent shoulder injuries from happening. This movement worked as the warm-up exercise and pre-exhausted Cutler’s muscles for the intense workout that followed.

Jay Cutler next jumped on to the plate loaded shoulder press on the hammer strength machine. He performed the sets with moderate weight. This compound movement primarily targets the front and side delts. In addition to this, the machine supports the back with pads and reduces unnecessary stress on the back.

After the first two compound movements, Jay Cutler performed this isolation movement that works the all the muscles in the shoulder region to load the muscles. Since the side lateral raises can be performed with relatively lighter dumbbells, most individuals can incorporate them in their training irrespective of fitness level.

Anterior delts are the muscles that help with shoulder flexion. Front raises primarily target this muscle. Core stability along with biceps, wrists and grip strength are important factors to perform this movement. While beginners are advised to use dumbbells, those at an advanced level can use a barbell. Jay Cutler performed the front shoulder raises with barbell and jumped on to the next one.

After working the front and side delts, Jay Cutler shifted his focus to rear delts. He incorporates at least two rear delt movements in his shoulder workouts and explained the reason behind it:

“I’ve lost a lot of my rear delt size and a lot it is because of the heavy rows that I used to do. So I tried to concentrate at least doing two rear delt exercises,” Jay Cutler said.

Rear delts are an important muscle group as they support many upper body functions and especially the arm movements. Cutler performed reverse Pec deck flyes to work the rear delts.

Cable rope face pulls activate the muscles in the upper back and primarily target the rear delts. This movement works rhomboid and trapezius muscles in the upper back which are crucial in maintaining a good posture. As a result, this isolation movement is beneficial for those looking to improve the posture. Cable face pulls worked as the finisher of the day as Jay Cutler performed a few sets of this exercise and wrapped up the shoulder workout.

Jay Cutler first worked the hamstrings with lying plate loaded leg curls on the machine. He then isolated each leg with single leg hamstring curls for better focus and performed three sets of this movement.

Quad movements followed the hamstring work as Jay Cutler performed leg extensions on the plate-loaded machine to work these muscles. This is an isolation movement and one of the better known leg exercises in the gyms across the world. Leg extensions do not work muscles other than the quads and therefore it is not effective in building overall leg strength. In addition to this, it puts a lot of stress on the knees and increases the chances of injury if not performed correctly with a proper machine.

Jay Cutler next performed the dumbbell deadlifts to work all major muscles in the lower body and wrapped up the legs workout with walking barbell lunges.