IFBB Pro Hunter Labrada plans to bring his heaviest and best look ever at the upcoming 2022 Mr. Olympia this Dec. 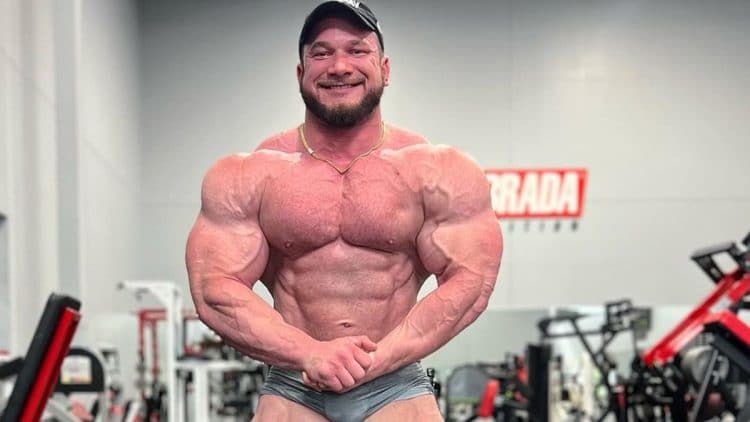 Hunter Labrada has emerged as an elite bodybuilder in the Men’s Open division and is highly touted for his ability to blend size and conditioning. In a recent Instagram post, Hunter revealed his weight of 286 lbs and stated that this is the heaviest he’s ever been while continuing off-season prep for 2022 Mr. Olympia.

Labrada had an eye-opening season as an IFBB Pro last year. Hunter won first place at the 2021 Chicago Pro, which saw him defeat one of the fastest rising stars in the sport, Brett “The Butcher” Wilkin. The performance earned Hunter an automatic invitation to 2021 Mr. Olympia. Looking to earn his first Sandow trophy, Hunter took to the Olympia stage and managed to earn fourth place. Given that this was only his second time competing at the biggest show of the year, Labrada exceeded expectations and even placed higher than 2021 Arnold Classic champion Nick Walker, who landed in fifth place.

Following their close contest at last year’s Olympia, many believe Hunter and Nick inadvertently started a rivalry. It appears whenever Hunter shares a physique update, Walker is right behind him with his own and vice-versa. According to Walker, he believes his physique was ‘more complete‘ than Hunter’s at last year’s Olympia event. Pushing each other inside and outside of competition, both IFBB Pros are determined to bring their heaviest package to the O stage as well as next-level conditioning.

Four-time Mr. Olympia Jay Cutler gave his opinion on the matter and says that Hunter Labrada’s shape was hard to deny, which he believes played a major role in the judge’s decision to award Labrada with the fourth-place designation over Nick.

Hunter Labrada Reveals Weight of 286 lbs: “This Is The Heaviest I’ve Ever Been In My Life”

In a recent physique update, Hunter revealed a post-training weight of 286 lbs, affirming that this is the heaviest he’s ever been in his life.

“Titan is clearly unimpressed.
–
Couple shots from today after training push! Fasted weight is hovering between 279-280 and post training has been 285-286. This is the heaviest I’ve ever been in my life (by 8 pounds) and far from the fattest I’ve been.
–
Stoked to have roughly 5 more months of improvement season before we head into the ⭕️ prep.” Hunter Labrada posted.

During his time away from the stage, Hunter grabbed headlines for his size after guest posing at the Jay Cutler Desert Classic a few weeks ago. The Texas native has left nothing up to chance while preparing for his next Olympia contest.

In order to keep his lower body proportional with his massive upper body, Hunter admits that he intends to steadily increase his squatting weight while prepping his physique. A few weeks ago, Labrada cranked out 17 reps of 495lbs heel elevated squats and plans to keep increasing the weight ”as long as everything feels good’.

With a symmetrical build and excellent conditioning, Hunter is determined to improve upon his performance from last year. Hunter’s well-balanced approach to building size could see him bring his best and heaviest package to 2022 Mr. Olympia in roughly five months.