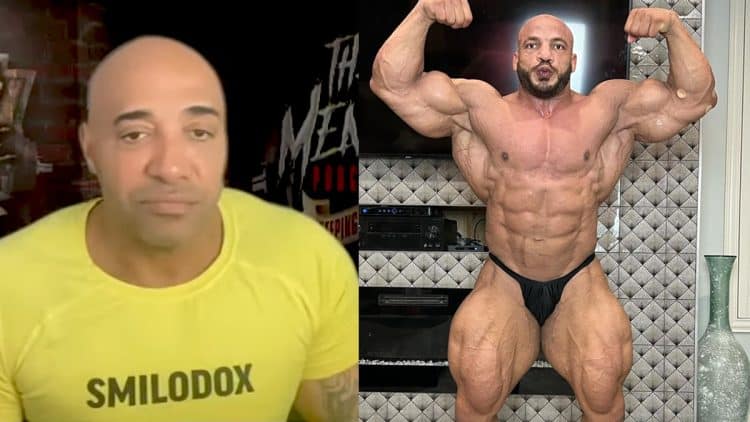 Former 2-time Mr. Olympia Big Ramy’s loss at the 2022 Mr. Olympia event has been the biggest talking point in the aftermath of the event. Egyptian IFBB Pro bodybuilder Mamdouh ‘Big Ramy’ Elssbiay was on the verge of becoming one the most dominant champions in the Men’s Open division. He entered the competition as a favourite owing to his track record of winning the 2020 and 2021 Mr. Olympia titles. However, his upset loss to Iran’s own Hadi Choopan has been subject to a lot of scrutiny ever since the event wrapped up. Bodybuilding Legend Arnold Schwarzenegger also opined that Ramy could have won at the event if he did some minor adjustments.

Big Ramy’s conditioning looked a bit off when he stepped on stage for pre-judging. The IFBB head judge Steve Weinberger placed Ramy on the extreme end during the final callouts while Hadi Choopan, Derek Lunsford and Nick Walker dominated the center. Hadi Choopan and others continued to dominate in the finals as well and Ramy ended up losing the title, finishing fifth in the Men’s Open division. Weinberger later stated ‘that was not the same Ramy we know.’

Retired bodybuilder Dennis James is a close friend of Big Ramy and is also his main training partner. Ramy stayed at James’ house during the 2022 Mr. Olympia competition prep to avoid the last-minute travel issues. Following Big Ramy’s loss at the event, James took to Instagram and stated that Ramy looked on point until one week out of the 2022 Mr. Olympia. The post implied that something went wrong in the last week of the prep which might have cost Ramy his third 2022 Mr. Olympia title. The post received criticism from some bodybuilding fans.

In a recent episode of The Menace Podcast, Dennis James, Milos Sarcev, George Farah and Chris Cormier recapped the event and discussed the reasons for Big Ramy’s loss at the event.

Dennis James started the podcast by stating that he spent a long time going through hate mail and hate messages that blamed him for Ramy’s loss at the 2022 Mr. Olympia. George Farah sympathised with Dennis and stated that most people don’t understand the stress professional bodybuilders have to deal with.

“Person can look amazing one day. This is like a stock market. In bodybuilding, every hour somebody can change. It depends on their preparation, state of mind. So how are they gonna blame (Dennis James) or blame anybody else? It is what it is, man,” George Farah added.

Dennis James seconded George Farah’s thoughts and questioned the whole idea of random people asking for an explanation for Ramy’s loss or rather Dennis’s role in Ramy’s loss.

“People are messaging me like I’m responsible to respond to let the world know what happened. First of all, who the f*** is everybody? Who are some of these people that think they have the right for anybody to report to them what the problem was? Nobody’s responsible to explain anything to anybody, that’s number one. Number two. There is no explanation. I guess things didn’t go as planned and that’s exactly what happened,” Dennis James stated.

Milos Sarcev chimed in with his thoughts on the situation. Sarcev implied that people tend to run wild with their imagination and come up with their own theories on matters like these.

“Dennis, how do you mean you’re not responsible? Didn’t you see the fifth biceps curl that Ramy went too fast? They’re gonna look for this kind of stuff and everybody is a goddammit journalist,” Sarcev joked.

“Masters have failed a thousand times more than the beginners have tried,” He added.

Dennis James stated that he thought most bodybuilders including Hadi Choopan seemed a little off from where he was sitting. However, upon reviewing some of the photos, James could notice a significant difference in Hadi’s physique.

“When Hadi came on from the front, he was crazy. When he turned around, he was a bit off. But I’m gonna tell you something. What’s cool about Hadi? The more he posed, the better he got,” George Farah added.

Dennis James admitted that Big Ramy also seemed to have phenomenal conditioning but he looked flat.

“Once we got to Vegas, Chad (Nicholls) stayed with Ramy in one place. I stayed in a different hotel and Chad took over because that’s Chad’s guy. I don’t have influence on that, I don’t get involved, I don’t even ask questions,” He added.

Dennis James revealed that he was with Ramy throughout the duration of his prep when Chad was coaching. He feels that everything including the former champ’s conditioning was on point. However, things had changed when Dennis met Ramy on Friday of the Olympia weekend.

“(Ramy) wanted me to look at him. I looked at him and I couldn’t tell Ramy. But I thought he was flat. We’re talking a couple of hours before prejudging. He just looked flat to me and especially in his legs,” Dennis James remembered.

According to Menace, he spoke to Chad Nicholls. The coach told Dennis that everything was fine when he was looking at Ramy. Dennis James believes that Ramy’s physique changes fairly quickly.

“Things can go from great to not so great in literally an hour. What the reason was, I don’t know. At the end of the day, when he came out I thought he was the winner,” Dennis explained.

George Farah opined that there were certainly some downsides to Ramy and that the increased cortisol levels may have hampered him as the event progressed.

Big Ramy’s lower back, triceps and indentations on his quads have been major points of criticism heading out of the 2022 Mr. Olympia. In his Instagram post reacting to Big Ramy’s loss, Dennis James had said that he was not aware of the reasons that caused the former champ to lose the title. The post has been criticised by many and James explained why he did not attribute the loss to the aforementioned problems:

“I see the dents in the legs, I see the lower back has gone. I see the triceps are down. That’s the same problem last year and the year before and he won the Olympia. So that’s why I didn’t address that. Why would I address what was a problem the past year?”

In spite of all the speculations and theories floating around, Big Ramy has taken the loss on the chin and he is not indulging into any of the controversies surrounding his loss. Ramy is not second guessing anything and has promised to come back stronger than ever the next year. However, the 2-time Mr. Olympia is trying to understand the reasons for the fifth place finish to be able to do that. There is no denying that one year is not a short time to turn the clock back. If Ramy takes his training, diet and criticism positively, he can definitely sit among the likes of Jay Cutler when reclaimed their top spot after losing it.

You can watch the full podcast episode here, courtesy of Muscle and Fitness YouTube channel:

Everything You Need to Know About Dry Fasting vs. Water Fasting