Levrone recapped 2022 Olympia and Big Ramy's fifth place finish: 'there were a lot of disappointments in that lineup.' 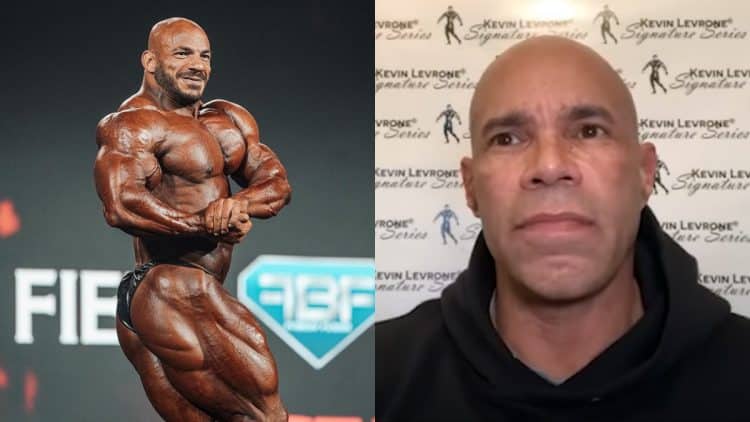 Hadi Choopan left Sin City as the newly crowned Mr. Olympia winner on December 17, 2022. The night was full of surprises as the sitting champion Ramy was dethroned and knocked back to fifth place. Meanwhile, Derek Lunsford made the most of his special invitation and pushed Choopan in the finals where he eventually finished runner-up.

Following the most important contest of the year, many veterans have discussed the results. While Nick Walker finished third, Milos Sarcev took issue with the outcome. He explained that his client Samson Dauda brought a more deserving package for bronze, however, finished the show in sixth. Reflecting on his performance, Dauda was grateful for what transpired on stage.

Levrone, who thrived as a Men’s Open threat during the 1990s, is one of the most successful bodybuilders to never win a Mr. Olympia title. He finished runner-up at the prestigious show four times (1992,1995,2000,2002), and claimed the Arnold Classic title twice — once in 1994, and again in 1996. In one of his latest endeavors, the bodybuilding veteran revisited 2022 Olympia and what happened to Big Ramy.

Kevin Levrone On Big Ramy 2022 Olympia 5th Place Finish: ‘He Would Have Won Again If He Looked Like Last Year’

According to Levrone, Ramy would have retained his title had he brought a similar package to the look he had at 2021 Olympia. He added that Steve Weinberger’s judging style can be tricky, which explained why Ramy never moved from the right side of the stage during prejudging.

The call-outs can be kind of tricky and different with Steve Weinberger you know. He has his style of doing call-outs. I could see why some people thought he [Big Ramy] was maybe first place because they kept him over there. When I won the Night of Champions, I was only in one call-out,” says Kevin Levrone.

Levrone believes Big Ramy and his team brought the best package they could under the circumstances.

“He wasn’t crsip, he wasn’t tight, and we’ve definitely seen him in better condition than he was on stage at the 2022 Olympia. I guess he did his best Ron. I guess he did his best, he and his team to bring the best package they could. I don’t want to beat the guy up, I feel sorry for him when you go from being Mr. Olympia to fifth place.

I hear he’s coming back next year — we just have to wait and see what he decides to do with him and his team. It’s disappointing, it’s disappointing for his fans too. I’m sure he tried his best and the outcome was the judges awarded him fifth place. Sitting there looking at the show, I can’t really say anybody was ripped or anybody was shredded,” shared Kevin Levrone.

While Levrone wasn’t blown away with the conditioning of any Men’s Open competitor on the 2022 Olympia stage, he acknowledged Choopan had the best from the bunch. When assessing the former champ’s performance, Levrone thought Big Ramy made it easy for the judges to penalize him.

“He [Hadi Choopan] was the best condition out of everybody on stage, he certainly had the best conditioning of what was on the stage and who he was competing against. I do agree with him winning the show. But I think there were a lot of disappointments because we were expecting more conditioning in that lineup for guys to bring it. That really didn’t quite happen.”

“Yeah he would have [won again] if he showed up looking like he looked last year or better. Had he shown up in shape, you know what I mean. Like I said, you can’t give the judges an excuse to get rid of you. He had that excuse and they got rid of him. He should of brought it, but I’m sure he probably tried.”

Levrone mentioned that conditioning is tough to master since athletes are often traveling and dealing with other obligations during the week of the show.

“There’s so much that goes into bringing conditioning from your house to a show in Las Vegas, that’s in a different city or a different country, or a whole different state. Some of these guys flew, they had to take plane flights. I don’t know when they got there. But all of these things have a huge factor into your conditioning. Flying — the altitude of being up in the air.”

Other veterans of the sport took notice of Ramy’s physique being off at 2022 Olympia. Samir Bannout, a former Mr. Olympia winner from 1983, specified that ‘things were missing’ from the champion’s package and named his triceps and lats as two problem areas.

RELATED: Judge Steve Weinberger on Big Ramy Losing His Title: ‘He Was Off, That Wasn’t The Real Ramy We Know’

After recapping the historic event, Levrone is optimistic about Big Ramy’s 2023 bodybuilding comeback. The former champion has promised he will fix the problems that held him back at 2022 Olympia before stepping back on stage.