Watch how the four-time Mr. Olympia maintains his shredded back in retirement with a series of intense workouts. 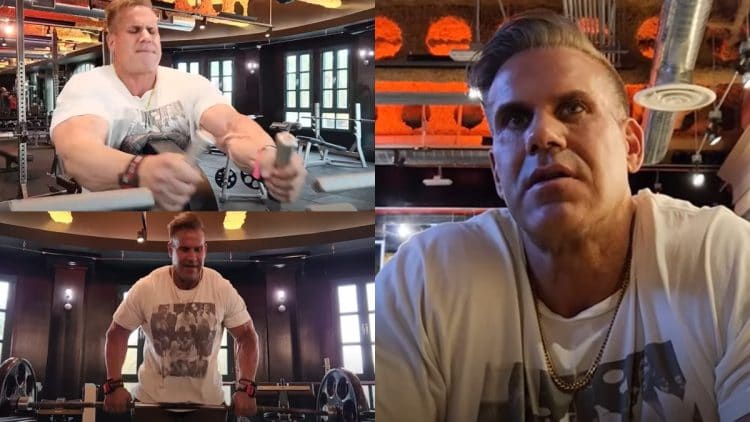 Bodybuilding legend Jay Cutler is one of the most prolific Men’s Open competitors to reach the top of the sport. In a recent YouTube video, Cutler talks about his training post-retirement and demonstrates a series of back workouts.

Cutler, who is currently enjoying retirement, remains committed to the sport. He always offers guidance and wisdom on some of the sport’s most deep-seated issues like steroids and training regimens. Cutler reached incredible heights during the 2000s as a professional bodybuilder. He is well known for his on-stage battles against Ronnie Coleman, a bodybuilder who shares the distinction with Lee Haney of having won the most Mr. Olympia titles, standing at eight.

Eventually, Cutler dethroned Coleman in 2006, showing that he had enough conditioning and sheer size to topple “The King”. While he lost his title to Dexter Jackson in 2008, Cutler returned in 2009, winning Olympia, and becoming the only bodybuilder in history to recapture an Olympia title that was lost in competition. This performance earned him the nickname “The Comeback Kid”. Cutler is determined to share some of his insight and training techniques with his fanbase, even if the methods differ compared to how his training went years ago in his prime.

In a recent YouTube video, Cutler reflects on his current training regimen, how its changed compared to when he was competing, and his desire to no longer ‘be big’.

“When I want to get down to my business and meditate with what I call my training meditation now because… you know how you used to go to the gym and you would train and you’re like, ‘ah I want to push this much weight. I want to get pumps. Oh, I’m doing chest, I want to see how full my chest can get.’ I said okay. What do I have to do to maintain a decent physique at my age and stay relatively lean and not be big. If that makes sense. I just don’t want to be big.” Cutler explained.

While Cutler had a vision of being 300-pounds during his competition days, that goal has changed and with longevity in his line of vision, he understands how important consistent training has become.

“Even though everyone looks at me and says ‘what are you talking about you’re already big. But not comparable to the vision I had of being 300-pounds. But that’s not what I want to be anymore. We all have different goals and mindset for why we go to the gym and train.

And mine’s right now, it’s a sense of relief for me. It’s a sense of… okay I had a busy day and I’m going to go train. As you know, it’s a little instinctive. I don’t have a time.”

When it comes to sleep, the four-time Mr. Olympia doesn’t like to live by an alarm. However, with a schedule as busy as Cutler’s, sometimes he only has enough time to complete essential tasks in the morning.

“I do sleep, but I don’t like getting up at a forced time. Tomorrow I have to get up at 3:30 a.m. to make the flight. I got to leave by five. So that only gives me an hour and a half to cook breakfast and do what I need to do. Shower, and odds and ends before I leave.”

After speaking about his training in retirement, Cutler proceeds to his back workout.

Find a full list of the workouts used below:

“It’s just back today. So you guys are going to see just a lot of training of back. The volume is still there. We will showcase a few of the exercises but we won’t drag the video on too long.” 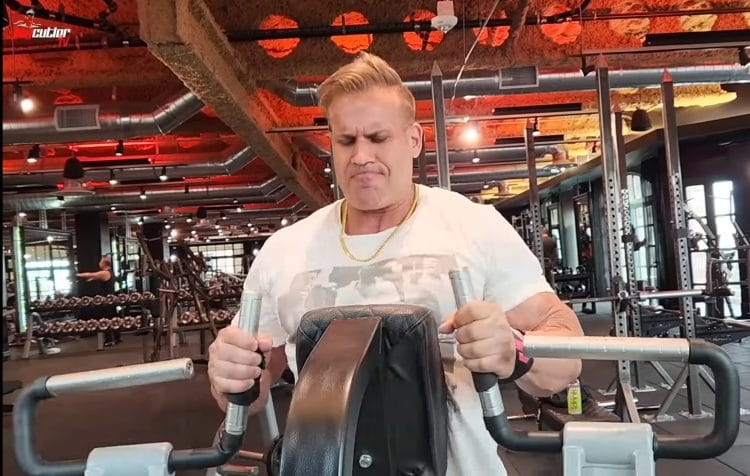 The Massachusetts native began his first exercise with the lat pull down machine (Hammer Strength). Cutler utilizes ‘feel sets’, recommending a total of two or three sets in the 10-12 rep range.

“The three plates I did were a little too heavy. So I backed off a bit. ” Cutler added.

“I really like the pull on this. We talk about popping the lats for the front double bicep. I’m kind of duplicating it even though my lats are a lot smaller right now.”

According to the retired IFBB Pro, he believes by gripping the middle during Hammer Strength chest-supported rows, a better contraction will come as a result.

Cutler decided to pause, then added 25-pounds to ‘reactivate’ his lats before completing his last set.

Exercise 3: Bent Over Row with Barbell

Cutler hammered bent over rows with a barbell next.

“Remember this is free weight. Remember. Very slow.” Cutler pauses in between sets.

Like the previous exercises, the 48-year-old advocates for two or three sets in the 10-12 rep range when performing machine lat pull downs.

For the next movement, Cutler hits seated cable rows. He recommends two or three sets for 10-12 reps.

Cutler practices lying dumbbell pullovers for the final movement, which he appreciates because of the way the technique pulls on his lats. Once again, Cutler emphasized the significance of modifying the workout with different grips.

“Alright so pay attention to that grip. So, if I was going to do chest. I’m going to grip the dumbbell like this, I’m going to do like a diamond. For back, I actually grip it like this. So my hand goes around like this [Cutler clinches one of his fists into the other tightly]. That way I pull here, and it pulls on the lats.”

The bodybuilding legend suggests to keep the rest period intervals at 45-seconds each.

“This is going to be the last exercise. So, pull downs. Row. Bent bar. Pull downs front wider. Seated cable rows and a pull over. Six times at least three, around 18 sets. Probably more with a couple of warm-ups. About 20 sets a body part. Try to rest 45 seconds between, although I think we might have hit a minute on some.” Cutler explained.

Despite fasting and being depleted, Cutler still pushed it inside the gym on the following day.

“I actually didn’t do cardio this morning. I didn’t do fasted this morning because I was so depleted. I only ate three meals yesterday. I was just busy. I came and trained. Then, I meant to stay awake and eat some meals but I go so tired that I passed out. Didn’t do an extra meal. So, yeah that’s it for back training.”

Judging by the comprehensive nature of this workout routine, health and longevity are some of Cutler’s most significant priorities. Another important goal for the retired IFBB Pro is to maintain a healthy physique without adding too much size.

While he might be retired, Cutler is still sporting an insanely impressive physique. Given the next crop of talent on the rise, many in the community can learn from a bodybuilder as successful as Jay Cutler.