Coach Milos Sarcev joined Jay Cutler to discuss bodybuilding's growing problem with drugs, 'all of us abuse', and suggested that people will always find a way to cheat drug tests. 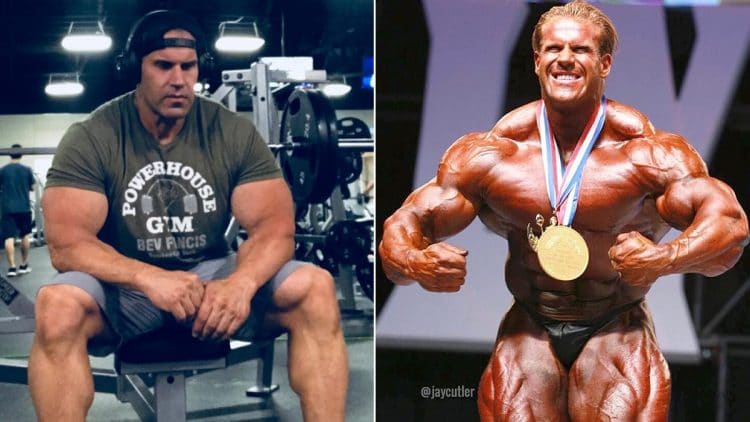 As one of the most decorated bodybuilders to ever compete, Jay Cutler is well aware of the sacrifices necessary to remain on top of the sport. In a recent sit-down, Cutler and bodybuilding coach Milos Sarcev discussed if they abused PEDs throughout their career and how to pass drug tests.

Belonging to an elite level of bodybuilders, Jay Cutler conquered the sport with huge muscularity and an incredibly balanced physique. His time in bodybuilding was met with resistance, but that didn’t stop Cutler from capturing the Mr. Olympia title on four separate occasions. During his epic run in the Men’s Open division, Cutler toppled one of the greatest athletes the sport has ever seen in eight-time Mr. Olympia Ronnie Coleman. After dethroning “The King” in 2006, the Massachusetts native’s legacy was set in stone.

Milos Sarcev is a well-respected bodybuilding coach who maintained an incredibly active career in his own right. While competing in the sport, Sarcev made it to the biggest stage at Mr. Olympia a total of seven times. In his later years, he maintains a busy schedule training a number of bodybuilders like notable Men’s Open competitor Regan Grimes.

In a recent edition of the Cutler Cast podcast, Cutler and Sarcev reflected on using PEDs throughout their career. According to the four-time Mr. Olympia, if you’re stacking compounds in abundance, that qualifies as abuse.

“I know but I feel like anything you’re doing in abundance for a show, meaning stacking compounds, is abuse right?” Jay told Milos.

Cutler admits there were others around him abusing in a more intense manner.

“Of course, listen there’s always someone speeding faster than you on the road, but we did a protocol but remember we are in something that wasn’t drug tested. It was kind of like a kamikaze, trial and error. You were a trial-and-error guy, this is how you learned your experience right?” Jay asked Milos.

“Yeah, I mean you do the reasonable risks that make sense.” Milos responded.

Jay recounts Sarcev getting Gustavo Vidal in jaw-dropping shape for the Ironman contest many moons ago. Ultimately, Sarvcev helped Vidal reach the podium at the Olympia for two years in-a-row after helping him out.

“I’ve seen you transform some of the most craziest physiques. Like, I mean, Gustavo Badell, I know we bring him up all the time. That guy went from last to winning. He was unbelievable for the Iron Man, and then he got top three in the Olympia for two years straight.” Jay explained.

“Yeah, we had Dexter, you, Shawn, myself, seminar right and when Gustavo came he had that purse right. Then, he left and Shawn was like ‘what are you going to do with him?’ ‘Do you see like his purse was sitting on the stomach, like this. What are you going to do?’ I said, ‘just watch’. He was third entitlement with Lee and Dexter being first and second.” Sarcev said to Jay.

In the eyes of “The Mind”, anyone who used steroids throughout their bodybuilding career has likely abused. In what came as a shock to Milos, Jay revealed that at one point in his career, he was taking 1000 migs of testosterone as part of one of his protocols.

“When you say okay, you admittedly abused. All of us abuse in the medical terminology.” Milos shared.

“Nobody would believe that you took this number.” Milos retorted.

Sarcev explains the highest dose of a test he took was around 750 migs.

While medical innovations have changed the sport in many respects, Jay believes drugs are rampant nowadays and that people have become adept at cheating drug tests.

Sarcev says that athletes can pass drug tests by understanding the window in which a drug will surface on a potential drug screening. However, he admits it’s harder to accomplish that in today’s bodybuilding climate.

“Now I don’t think it’s even possible. Back in the day I was a part of it. Milos said.

Cutler and Jay discuss the windows of time in which a drug takes to pass through the body.

“I know but like, there’s certain steroids that are in and out of the system with the best effect. Which ones should you stay away from?” Jay asks.

“There is a plasma half-life right. Milos responded. But then there’s a clearance time.”

“Like with Winstrol, it stays in your system a long time right” Jay asks Milos.

“Yeah, like I remember, 49 days is the longest, it’s just too, too long. Sarcev explains. Nandrolone can stay a year and a half.”

While some PEDs have a short half-life and exit the body rapidly, some drugs can take months to leave the system.

“Yeah, well testosterone, epitestosterone ratio, say you shoot testosterone, and it shoots way over the 7:1 ratio, then you’re going to be caught. But now the most sophisticated ways of testing, I wouldn’t even. I was approached, ‘can you beat the test?’ I said, the only way we can find out is try it and no, these athletes were tested in a UCLA lab, and all passing. Okay now we have a green light. This is how we did it. Pretty much like the Russians back in the day. If you knew how to pass the test, you could.” Milos said.

Sarcev emphasizes that people will always find methods to outsmart drug tests. Drugs have impacted all sports, even the Olympics. In an interesting tidbit, Milos says that older Olympia contracts stated that you were not allowed to say if you took steroids or not.

“There’s always some people who are going to find a way to outsmart them. I didn’t believe it so I would like to, say it’s a clean sport. When I heard from Charlie Francis that nine out of ten Olympic medalists used, I’m like ‘come on… I wouldn’t want to accept it’. You want to believe the integrity of all athletes and ethics so for us, it’s not the drug test contest that I tried to enter and beat the test.

I was entering bodybuilding contests, I was allowed to take it, I took it. I would have an issue ethically myself, morally right, okay now, I’m going to do this and cheat. I didn’t want to cheat myself. You know with the Weider contracts, you were not allowed to say if you take steroids. Yes it was in the contract. I cannot lie. I use it since ’87. If there is a way, someone will find it. There is always chemists that can produce something.” Milos said.

RELATED: Legend Jay Cutler Reveals His Steroid Cycles To Answer a Hidden Question: ‘What Do the Pros Take?’

Milos and Jay are adamant that drug tests can be beaten and believe chemists have become more capable in those regards. Jay Cutler has reached a level in the sport that few may ever experience, so it’s refreshing to hear his insight on sensitive issues affecting bodybuilding, especially in the company of a successful coach like Milos Sarcev.