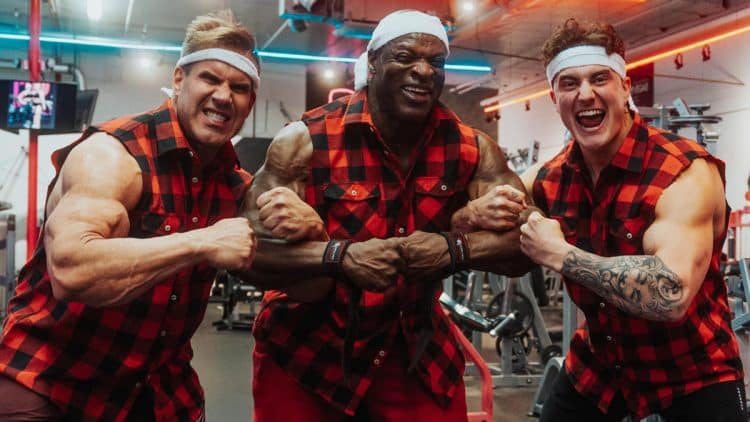 Fitness influencer Jesse James West brought together legendary bodybuilders Ronnie Coleman and Jay Cutler for an interesting workout session. West is an American fitness YouTuber that has amassed 2.2 million subscribers to his channel. His content mainly includes workout collaborations, fitness challenges, and pranks as well. Recently, he collaborated with Larry Wheels for a unique workout challenge where the duo had to lift 100,000 lbs in 60 minutes. Previously, he survived training like David Goggins and also followed Liver King’s diet and lifestyle for 50 hours straight. West collaborated with Ronnie Coleman and Jay Cutler in his most recent video.

Ronnie Coleman is one of the greatest bodybuilders in the history of the sport. He holds the record for the most Mr. Olympia wins (8 wins) along with Lee Haney. Coleman won the prestigious title in a historic run from 1998 to 2005. During this time, he developed a fierce rivalry with rising contender Jay Cutler who challenged Ronnie year after year without losing hope. Cutler eventually dethroned Ronnie at the 2006 Olympia and went on to secure the victory three more times in 2007, 2009, and 2010. Both men have adapted well to the age of social media and remain popular figures in the bodybuilding industry. Ronnie Coleman was awarded the Lifetime Achievement award at the 2021 Arnold Classic for his immense contribution to the sport of bodybuilding. Ronnie Coleman and Jay Cutler are retired but not yet done. They prove that camaraderie is stronger than rivalry.

Jesse James West collaborated with Jay Cutler and Ronnie Coleman to ‘find out who the best bodybuilder is’… Joking of course. The trio trained back and biceps together as West tried to know more about Ronnie and Jay through fun conversations. So without further delay, let’s delve into a detailed account of this training session.

The legendary bodybuilders and their host moved on to the close-grip seated rows next. Jesse James West was curious about different techniques people use to do this exercise and turned towards Cutler to find an answer to this question. Cutler stated:

“Everyone has their style though. I mean I couldn’t train how Ronnie trains. I’m sure he looked at some of my training thinking if that doesn’t work. He’s laughing…”

Jesse James West revisited the past and asked Ronnie if he was ever worried about losing to Jay Cutler when their rivalry was at its peak.

“I was always focused on what I was going to do,” Ronnie stated.

Jay Cutler jokingly replied that Ronnie was scared. Upon being asked if they ever engaged in trash-talking with each other, Cutler shared his own observation from the past and said:

“On stage, Ronnie was too confident.”

“No one out-trained him. That was the whole thing,” Cutler said admiringly.

The trio cranked out some solid sets of close-grip seated rows and moved on to the next exercise.

Ronnie Coleman has not forgotten the loss to Jay Cutler

Every individual will be intrigued when placed in the company of two of the greatest competitors of all time, and Jesse James West is no different. The 22-year-old wanted to know if Ronnie remembers the day Jay Cutler beat him at the 2006 Mr. Olympia.

“Oh yeah. (I remember it) like it was yesterday,” Ronnie said.

Ronnie joked that he still gets nightmares about the loss and ‘wakes up with cold sweats’ sometimes!

The trio next took to the chest-supported seated rows on the lever machine. Ronnie took a fun jab at the exercise and joked that he never did these kinds of exercises at the peak of his bodybuilding career.

“Come on man! This is for other types of men!” Ronnie laughed.

Ronnie, Jay and Jesse did some solid sets of this exercise with a positive attitude. They did dumbbell curls next to work the biceps. This served as the final exercise of the day as the trio wrapped up the training session after some good sets.

Ronnie and Jay reveal their favorite body parts to train

Ronnie Coleman and Jay Cutler possessed massive physiques at the peak of their careers. Ronnie’s off-season weight was nearly 330 lbs while Jay touched 300lbs. They worked every muscle in the body to build their physiques. However, everybody likes to train some body parts more than other.

It is common for people to avoid training their legs in the gym, however, Ronnie listed them as his favorite part of the body to train. It is not surprising that he reached a level of success that very few people will ever achieve. Cutler also said he finds the leg and back to be the most challenging parts of the body to train, but he also finds them to be his favorite parts.

Jay Cutler and Ronnie Coleman are some of the most revered figures in the bodybuilding industry. It is heartwarming to see them train together and rekindle memories from their competitive days. The Masters Olympia is set to return in 2023 after an 11-year absence. The event will take place at the BT Arena in Cluj Napoca, Romania from August 25-27. Although Jay Cutler can be a great addition to the show, he has shut off the speculation and will not participate in it. It will be interesting to see how things unfold in the next few months.