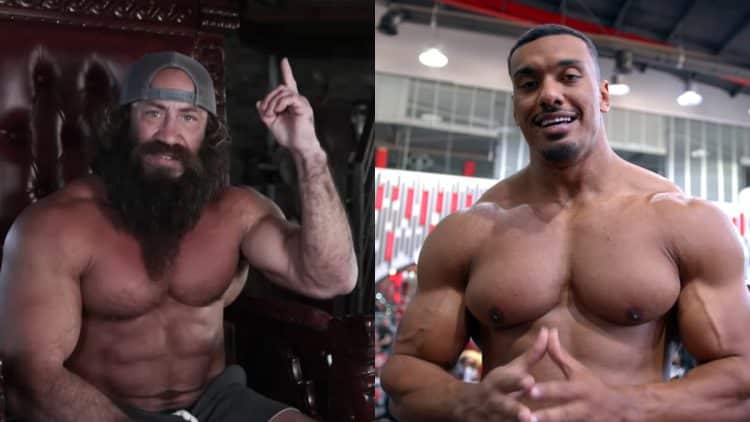 Powerlifter Larry Wheels has become one of the most popular fitness athletes due to his crazy feats of strength. After Liver King confessed to using steroids, Larry Wheels believes it was all a set-up and designed to garner publicity.

Internet sensation Liver King first gained attention for his insanely jacked physique and unique approach based on the nine ancestral tenets. He quickly amassed over 1.7 million followers on Instagram with unconventional training methods and of course, eating raw organ meat like liver.

While many were sold on Johnson’s mission to spread the ancestral style of living, others such as popular podcast host and UFC color commentator Joe Rogan were not convinced. Rogan made no hesitations in claiming King had an a** filled with steroids despite Liver King dismissing those accusations on a number of occasions.

Earlier this week, PED expert Derek of More Plates More Dates (MPMD) leaked an email that allegedly proved that Liver King was indeed on steroids. The email described and listed the alleged cycle he had been using back in June of last year. Many in the fitness community were surprised to see that Liver King was spending up to $11,000 per month on growth hormone in addition to using a handful of other compounds.

Johnson issued a cryptic message stating that he was ‘grateful’ for the recent turn of events but did not respond directly to Derek. Liver King later followed up with an apology video on his YouTube channel to clear the air on the matter. He confessed to using steroids and admitted he was still using a cycle but under the guidance of a hormone specialist.

In a recent YouTube video, Larry Wheels alleged that Liver King planned and set up the email leak to promote his brand of Ancestral Supplements.

“Liver King has taken the Internet, more specifically the fitness industry by storm. Every channel I follow has made a video about Liver King… I think that this is orchestrated. This is just my two cents. I think that this email was leaked on purpose and it was done for the reason being that every channel you can think of, or at least he was hoping for this to happen will make a video about him and the situation. Thus, bringing him an enormous amount of traffic.”

Wheels does not believe Liver King was sincere in his apology video.

“He does have a loyal fanbase that will stick by his side no matter what and I would say to the point of being cultish. He just released an apology video talking about how he shouldn’t have done this, why he did what he did and for the most part, he has a positive response from his fanbase seemingly so forgiving him. I think this isn’t going to hurt him by any means.

“He’s only going to grow from this and that’s why I think it’s orchestrated. Even if it wasn’t, he’s a smart man who’s made it this far and he will make the most of the situation to get even farther.”

“I don’t think his apology is valid just because of the timing. Only after he’s been busted, caught red-handed does he decide to apologize. Now had he come out without that email getting leaked and made an apology, but no he got busted and then apologizes. So, is it valid to me? No.”

In the past, Larry Wheels has shown the dramatic effects steroids had on his face. He shared a side-by-side comparison photo via Instagram. Since embarking on his strict TRT regimen, he appears happy with the results and added that he’s still getting great pumps in at the gym.

Larry decided to stop taking steroid cycles recently. Instead, he’s only been using TRT (Testosterone Replacement Therapy). Thus far, he hasn’t noticed dramatic changes to his mood or strength. Last month, he showed off his insane power with a a massive 672.4-lb (305-kg) squat for six reps.