Jujimufu just posted a huge squat and proved that he can compete with some of the strongest people on earth. 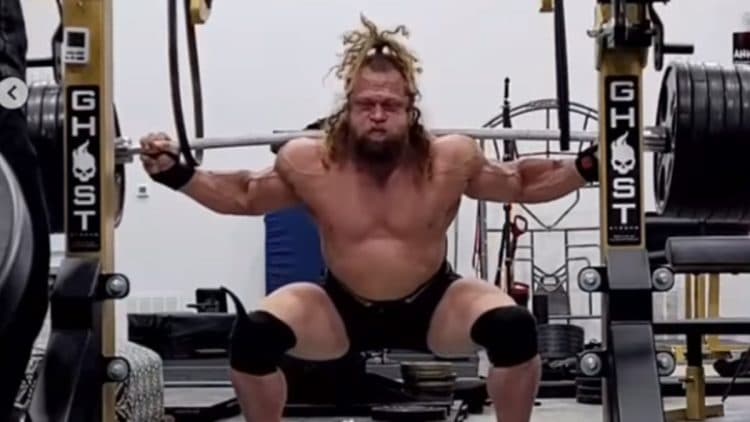 Jon Call, better known as Jujimufu, is one of the biggest fitness YouTube stars, and an exceptional strength athlete. He got his fame through doing some ridiculous feats of strength, but alongside that, also being really flexible. Jujimufu’s unusual lifts often go viral, but he excels in the basic lifts too, and he recently posted a new squat PR from his home gym.

The video displays a huge 318 kg (701 lbs) squat from two different angles, which gives insight into his technique and depth. The squat looked very comfortable for him, and it seems like he can go even heavier. Jujimufu used a lifting belt, knee wraps and wrist wraps to aid him in the lift.

Jujimufu joined the 701 Pounds Squat Club, which even some great powerlifters strive to achieve. His bodyweight at the time of the lift has not been revealed, but he looks bigger than ever.

From an early age, Jujimufu was interested in many sports, primarily martial arts and strength training. After training for some time, Jujimufu could do the splits, which later became one of his signature poses. He became famous because of his unique and challenging workouts, even partnering up with elite strongman athletes like Martins Licis. In addition, he took part in various grip strength challenges, including arm wrestling. Carrying a very pleasing physique while also doing the splits and backflips attracted some attention from the internet. He quickly gained fame, and now has a combined total of 3 million followers across YouTube and Instagram.

With his amazing strength, Jujimufu also tried out powerlifting. He took part in 3 sanctioned competitions. His most notable success was coming third at the 2020 WRPF Hybrid Showdown II, in the 110 kg category. In addition, Jujimufu competed in the raw w/wraps category.

In 2020 Jujimufu gave his fans a chance to vote if they would like to see him compete in a bodybuilding show, to which most voted yes. After a very long preparation and help from some bodybuilding icons, Jujimufu got the chance to compete. He took part in the 2021 NPC Worldwide Amateur Olympia Orlando, in the super heavyweight division. Jujimufu got a 5th place finish, which is very impressive for his first competition.

It is impressive to see a man take an interest in so many sports like Jujimufu did, but after his recent squat PR, it looks like powerlifting would be the best for him. He is incredibly strong and could easily compare with some great powerlifters.