"The Mutant" and 212 Olympia contender Derik Oslan got busy on leg day: "the way we train, three exercises was enough" 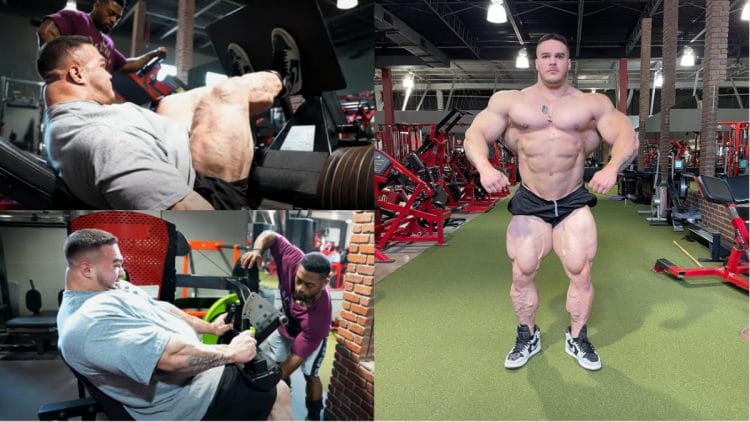 Nick Walker, one of the fastest rising stars in the sport, never misses a training session, especially when it comes to the lower body. In a recent YouTube video, Walker and 212 competitor Derik Oslan hit a brutal series of leg workouts.

The young yet talented Walker quickly rose to prominence in bodybuilding due to his freakish size and detailed conditioning. He utilized those weapons to turn in a historic rookie season last year. He kicked off the year by claiming gold at the 2021 New York Pro. Following the success, “The Mutant” brought his physique to the Arnold Classic in the same calendar year, a competition that saw him win in a dominant fashion. Before capping off the tremendous run, he made his debut on the 2021 Mr. Olympia stage, earning fifth place in the Men’s Open division.

Meanwhile, 212 standout Derik Oslan made the most of his first Olympia appearance in 2020, where he walked away with eighth place on his first attempt. He competed at two IFBB Pro League shows last year. First, he turned in a ninth-place showing at the 2021 Indy Pro, and then showed improvements at the New York Pro in the same year, taking fourth place. His most recent performance came once again on the east coast, when Oslan landed in fourth place a year later at the 2022 New York Pro. After joining Walker for leg day, it appears Oslan is on track for another explosive season.

You can find a full list of the workouts featured in Walker’s video below:

The two begin with seated hamstring curls. This exercise featured four sets in the 5-7 rep range.

For the machine lying leg press, Walker utilized a quick warm up set before jumping into his second set consisting of 15 reps. Walker tells Oslan to hit five regular reps, then five slow, and back to five in rapid succession.

For one of their more taxing movements, Walker and Oslan hit seven sets of machine hack squats for no less than 12 reps. In between sets, Oslan acknowledged that the rest periods are more strenuous than the actual exercise.

After the two bodybuilders admire their leg gains, they move to the seated hip adduction machine next.

Walker and Oslan practice one set for 6-8 reps on the seated hip adduction machine.

Before wrapping up leg day, Walker and Oslan move to the seated calf raise machine where they hit two sets for five reps

“Woo. Ric Flair baby. Alright, so yeah that’s it. That was a damn fun leg day. A more quad dominant day for me. I do both. I do a little hammy on the quad day and I do a little quad on hammy day too. I incorporate both on each day but this was more of a quad dominant.

Again, the way we train, three exercises was enough. I think we truly only did one failure set on the hack. But again, we did a lot leading up to that failure set and also pushed it harder on that. So, I thought that was enough. Then, FST7, pretty much after that, that should be it. Then we hit a little abductor and that was it.” Walker added. “You don’t want to go too hard, but hard enough.”

Given his consistent nature, and dedication to the sport, fans are counting down the days until Walker returns to bodybuilding’s most prominent stage at Mr. Olympia. He continues to make gains in the off-season, and judging by his recent workout, he intends to bring size and balanced proportions to the stage this winter.

Walker has been hard at work training for Olympia. He recently linked up with former 212 Olympia champion Kamal Elgargni for a ‘big back day’ workout. The 27-year-old admits that he enjoys training with Elgargni because the 212 standout likes to focus on volume, whereas Walker is more accustomed to heavier workouts. In addition, the New Jersey native also trained alongside reigning 212 Olympia winner Derek Lunsford.

Walker looks to be on track for another historic year in bodybuilding. After showing 212 competitor Derik Oslan some of his go-to leg workouts, it’s evident how detail-oriented Walker is when it comes to exercising.