Julius Maddox is plowing his way to the 800 lbs bench, as he seems to be stronger than ever. 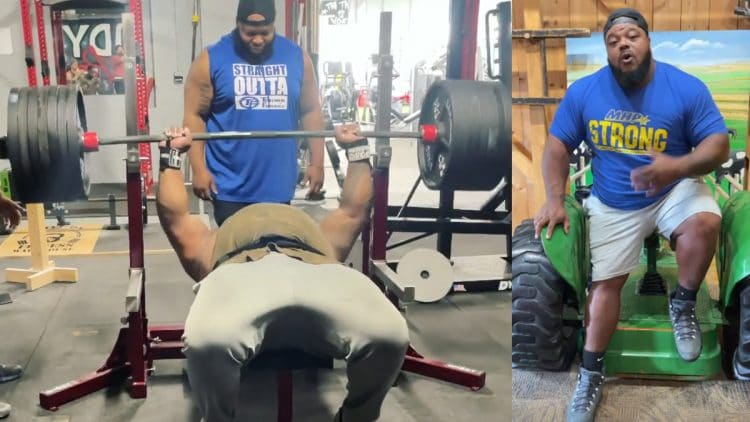 Despite being the All-Time Bench Press World Record holder, Julius Maddox is still making improvements in the gym. He has been slowly building his strength up and after taking some time to get accustomed to the heavier weights, Julius Maddox has now claimed an extremely impressive PR. On April 24th, Julius shared his incredible feat of strength by showcasing four reps of the 700 lbs (319 kg) bench press on his Instagram account.

Having only used wrist wraps to aid him in the lift, Julius Maddox’s new four rep PR is considered raw by powerlifting standards. It is almost unbelievable that anyone can achieve these types of lifts, but he made every rep look very comfortable, and it seemed like Julius was definitely able to do more. The bar had a significant bend, which puts into perspective just how heavy it actually is.

Julius Maddox did not specify how much he weighed at the time of the lift, but his competition bodyweight is around 450 lbs (204 kg). It is also unclear when he will take part in his next competition, but it looks like Julius will be ready soon.

Julius Maddox At A Glance

By squatting 775 lbs (351.5 kg) in a recent training session, Julius Maddox proved that he does not neglect any lifts, but his powerlifting career has been focused on the bench press. In 16 sanctioned powerlifting events during his career, Maddox has never recorded a squat or deadlift. This paid off for him as he claimed the All-Time Bench Press World Record of 782.6 lbs (355 kg), which he set at the 2021 World Raw Powerlifting Federation (WRPF) Hybrid Showdown III.

Julius Maddox is now chasing the 800 lbs (362.9 kg) for the third time in his career. His first attempt came in 2020, and he was unsuccessful due to the uneven loading of the weights. Julius took the mistake of the spotters like a champ and moved on. His second attempt was in 2021 and Julius was just not prepared enough to bench press 800 lbs.  He has had one attempt in each of the previous two years, so if all is well, Julius will try to claim the milestone again this year.

Danial Zamani is the only person that successfully bench-pressed 800 lbs, but he did it in training. As such, the lift is unofficial. So Julius Maddox is still aiming to become the first person to bench press 800 lbs in an official powerlifting competition. He is definitely the most competent athlete to claim this achievement, and his training footage is proof of it.