Julius Maddox is inching closer to the 800 lbs bench press with every week that passes. 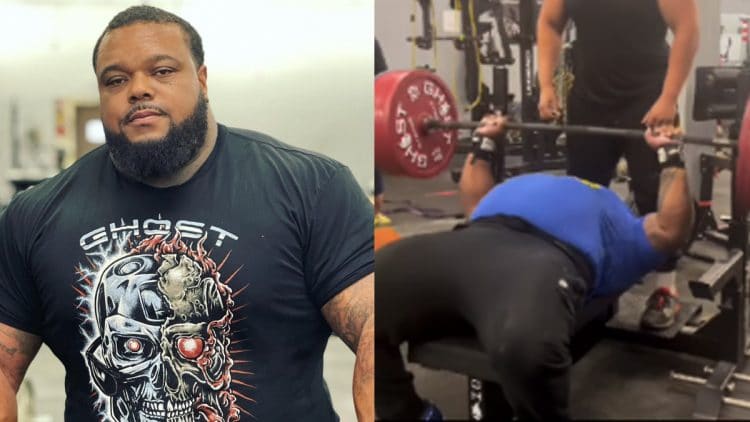 Julius Maddox wants to become the first person to bench press 800 lbs in a competition, and thus further improve his world record. He took some time off to rest, but now he is back to training and looks fantastic. On March 28th, Julius posted a heavy single 735 lbs (333.4 lbs) bench press in prep for 800 lbs. This is the first time that Julius loaded the bar with 700+ lbs in the last five months.

Julius Maddox’s 735 lbs bench press was done with unbelievable speed, which is more than impressive. Julius looked incredibly stable and comfortable with 735 lbs on his hands despite not lifting this heavy for almost half a year. In addition, he only used wrist wraps to aid him in the lift, making it completely raw.

“It’s only a matter of time… When I say this 735 felt like an empty bar is an understatement. It scared me when it came off my chest.”

If you need some bench press motivation for the day(because it’s Monday), then dont look any where than maddox’s huge 735 lb bench session:

It seems like Danial Zamani’s 804.7 lbs (365 kg) bench press from training absolutely reignited Maddox’s desire to officially claim the 800 lbs milestone. Julius is still considered as the greatest raw bench presser as he holds the World Record of 782.6 lbs (355 kg), which he set at the Hybrid Showdown III on February 20th, 2021. Julius Maddox also held the previous record, having lifted 770 lbs (349.3 kg) at the 2019 Arnold Sports Festival.

At 34-years-old, Julius Maddox has taken part in 17 competitions and has not performed the squat or deadlift events once. He is a complete bench press specialist and is also one of the best to ever do it. Julius is extremely dominant in the bench press and has no serious threat towards his World Record apart from Danial Zamani However, Julius is not satisfied with his numbers yet, and wants to become the first person to officially bench press 800 lbs raw. He has already attempted to hit the milestone two times.

His first attempt came in 2020, and he was unsuccessful due to a weight misload. The organizers of the event made a mistake and one side of the barbell was loaded with more weights than the other. For his opener, at that competition, Julius absolutely destroyed the 722 lbs bench press, and seemed on track for the 800 lbs. A few days after the incident Julius stated that he does not blame the spotters and that everyone makes mistakes. In addition, just a year after his first attempt, Julius wanted to try again. Unfortunately, he was not successful and took all the blame for it.

Hopefully, we will get to see Julius Maddox attempt the 800 lbs bench press this year. He has also learned from his past failures, which could help him execute it in his next attempt. Julius is training extremely hard and is making significant progress. He is already closing in on his best lifts, and it looks like we could be in for a treat soon.